Review: ‘Ready Player One’ is a Total Knockout 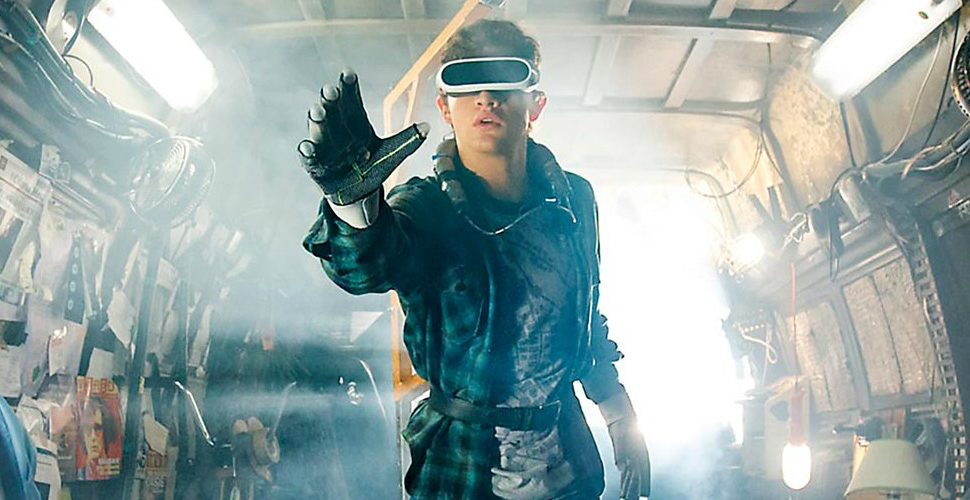 Movies like ‘Ready Player One’ are the reason movies were created. To amaze, to delight, to transport, to tell a great story.

There does not seem to be a moment where anything on the screen is still, where there is no motion. The film is a dizzying ride through pop culture, mostly eighties, one that feels like Spielberg’s earlier work, his blockbuster years, but merged with his ever evolving skill as a director.

A visual knockout, a rollercoaster ride that will thrill audiences; a brilliant, breathtaking ride that grabs you, pulls you tight and never let’s go. Given the story, most of all given Spielberg was directing, there was little doubt the film would be good, but I do not think anyone expected how truly great the film is.

By now Spielberg’s needs do nothing to prove himself. Even the snooty academics have conceded his gifts as a director, and many believe what I do, that he is one the greatest filmmaker in the history of the cinema. 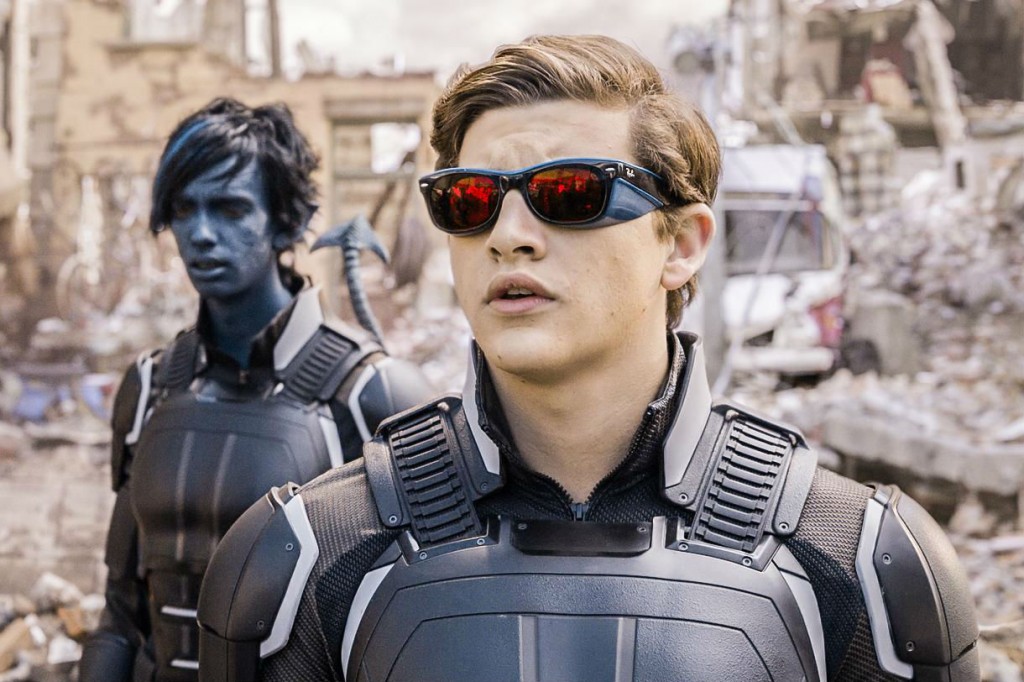 Spielberg has been a great storyteller from the beginning, a master of the camera, it is as if he sees each edit in his head before the film is finished. He has learned from his mistakes and takes them to heart, sometime far too personal. Yet he has never given up and took the easy way out, never. His best fifteen films are among the greatest ever made, and even his weakest (does he have a worst?) are beloved by millions and made millions at the box office.

In the years since winning his second Academy Award as Best Director, the first for Schindler’s List (1993), the second for Saving Private Ryan (1998), which also won him his third DGA Award, he seems to have been liberated, freed of the burden of having to prove himself, free to make the films he wants the way he wants. Since 2001, he has directed five Best Picture nominees His career right now is made up of historical drama and science fiction fantasy, and he seems content with both.

Ready Player One is a truly awe-inspiring, towering piece of work, the work of an artist absolutely confident in his abilities and artistry, his finger on the pulse of world movie goers. With a salute to eighties pop culture, and video games, the characters hurtle through the worlds in the film, encountering some of the more famous and infamous characters of the eighties. What I liked is that they are not the major characters, they simply exist in this work called The Oasis. Slipping into this virtual world you are as likely to encounter King Kong as you are the T Rex from Jurassic Park (1993), the cast of Who Framed Roger Rabbit (1988) or end up in the Overlook Hotel of The Shining (1980). 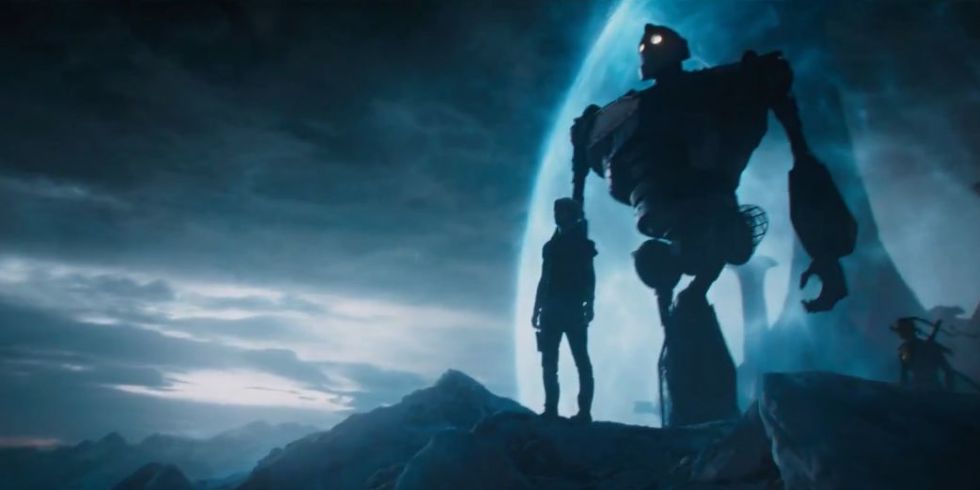 The year is 2045, the earth is a dystopian, messy environment, impacted by climate change, wildly over populated, people living in trailers stacked on top of one another, towering into the sky, true trailer parks, grimy, rusting and looking unhealthy. They find their escape by donning glasses and slipping into the virtual world known as the Oasis where literally anything is possible.

Wade Watts (Tye Sheridan) lives on the highest trailer, a leaning mess of a tower in the ghetto park called the Stacks. He is both the lead character and our narrator. When he goes into the Oasis he becomes Parzivaln a young man hunting for an Easter Egg hidden in the Oasis. This is a much valued egg as it will bring unspeakable power to the holder. The creator of the Oasis, Halliday (Mark Rylance) was something of an oddball, and hid three eggs in the Oasis, the winner to take control of the virtual world and the five hundred billion collected each year. Inside the Oasis, Parzivian encounters the avatar he is smitten with, Artemis (Olivia Cooke), also seeking the eggs. Seeking he eggs also are several corporate drones dispatched by Sorrento (Ben Mendehlsohn) who wants the company, money and power for himself, and has the means to get it. What he does not count on is how smart these kids are.

The visual effects are simply awe-inspiring because there seems to be non stop motion on the screen, with snazzy cameos from icons, major and minor from pop culture with the eighties dominating. Races seem pumped into hyper drive, faster than fast, the action sequences are thrilling, there really is nothing to even nitpick about! 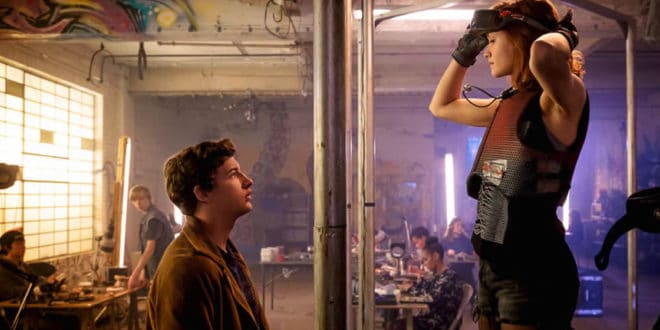 The actors do excellent, considering they must have known the effects around them had the promise to minimize their work, but it never happens. Tye Sheridan is rock solid as Watts, bringing to his character a confidence that often is surprising, but he merges that with an almost giddy delight at the world he is discovering with each visit into the Oasis. We see everything through his eyes, thus we experience the film through him, his words carry us into the movie and he never fails us.

Miss Cooke has been delighting fans of Bates Motel for years as the chronically ill young friend of Norman Bates who ends up marrying Norman’s stepbrother. With her big brown eyes, she allows us into her soul, and within this film she is quietly superb, quiet until she enters the Oasis and becomes a kick ass, bike riding hero. Her work here promises a great film career ahead of her.

As the mysterious creator Halliday, Oscar winner Mark Rylance is, as always outstanding. We can sense his genius, but with that his kookiness, but never is it overplayed. The gifted stage actor has made a beautiful transition to film, already has won an Oscar as the droll Russian spy in Bridges of Spies (2015) and worked with Spielberg now three times.

The film makes a powerful statement about getting caught up in social media and gaming. While it is exciting, fun, one must be careful not to allow it to become your life. It is not reality, never will be, but it is an easy addiction. How many of you cannot put down your cell phone, or tablet? Do you game on it? Watch movies? Do you pull it out in a room full of people? Look around you, all around you. Life does not take place in a gadget, but all around you. The more time you spend within your gadgets, the more life you miss, and you cannot hit pause, it is time you never get back.

Ready Player One is a knockout, destined to be among the years very best films.