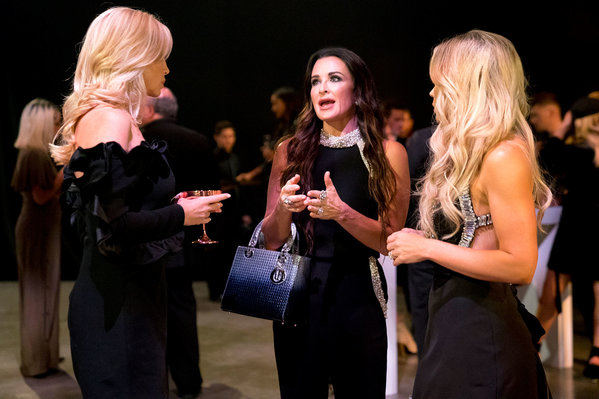 The RHOBH ladies are back once again in their familiar set-up of a get-together party. But this time, the dinner is hosted by Kyle Richards and as expected, it is a disaster! Kyle holds the 16-people event to celebrate her homecoming after being in NYC all this while. However, it’s natural that things take a sour turn. Now, if you are already done and dusted with the third part, it’s time we give you a heads-up about the next week. Read on to know everything about ‘The Real Housewives of Beverly Hills’ Season 10 Episode 4.

Titled, ‘All’s Fair in Glam and War’, Bravo describes the episode as follows: “After an awkward invitation, Lisa Rinna and Garcelle opt-out of Teddi’s fitness and wellness retreat, which is far from relaxing for the other ladies. Kyle and Erika question Dorit’s all-about-me behavior. Denise is upset when her backyard dinner party takes an R-rated turn in front of her kids. The ladies are shocked when Kyle becomes inexplicably emotional.”

Seated at Kyle’s home, the ladies decide to start a game — reveal the first impression about the person sitting next to them. Kyle, Garcelle Beauvais, Lisa Rinna, Dorit Kemsley, Erika Girardi, and Denise Richards begin and tell nice things about one another. But when it is Sutton Stracke’s turn, she explains that she wants to be honest. Right adjacent to her is Teddi and Sutton tells that when she first saw Mellencamp, it seemed she might be “a little boring”. Later, Sutton tries to amend the situation by saying: “You’re more interesting than I thought.” But things once said cannot be taken back and this leads to a heated argument. Ultimately, an expecting Teddi breaks down and leaves the room.

Sutton later apologizes but she claims that she does not regret what she said — and surprisingly, Kyle supports her. Eventually, the conversation shifts to Denise’s husband Aaron Phypers’ profession. According to him, cancer is apparently a friend, which happens because the body’s immune system is fighting another infection that would have killed the victim much sooner. And when he refers to the disease as a friend, it leads to a round of mocking comments between the ladies. In the midst of the entire discussion, Denise takes a convenient trip to the bathroom.