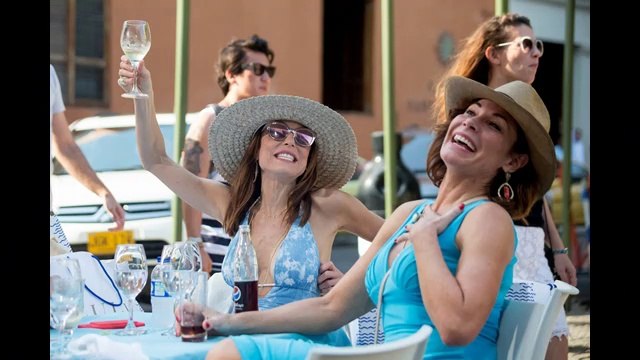 ‘The Real Housewives of New York City’ dropped with a bang last week and we are already into the second episode this week. But what’s surprising is how newcomer Leah is already fitting into the groove. Just two episodes in and she is already the center of attention. She is young, confident, and gets her own way without getting too aggressive. Well, we will leave the rest for our recap section.

Now, in order to ensure that you are all caught up with the latest shenanigans, we bring you the details of the upcoming episode, i.e ‘The Real Housewives of New York City’ Season 12 Episode 3.

When is The Real Housewives of New York City Season 12 Episode 3 Release Date?

Titled, ‘Don’t Mansion It’, Bravo describes the episode as follows: “The girls weekend in the Hamptons continues. Ramona brings the ladies to a local winery where they learn about Leah’s past and Dorinda’s present. Ramona’s hosting continues at a mansion party that evening with a group of new friends she’s trying to impress. Despite Ramona’s constant reminders to behave themselves, Sonja loses control after being triggered by Ramona’s friend Elyse.”

Where to Stream The Real Housewives of New York City Season 12 Episode 3 Online?

In episode 2, we see Leah at the rooftop sipping wine with Tinsley and Sonja. She tells them that Ramona has invited her to come over to the Hamptons with the rest of the ladies. She also confides that she has a tattoo on the lower back and she is already planning to remove it. Sonja then informs Dorinda about Leah’s “tramp stamp” and Dorinda replies: “I’m not into tattoos.”

Meanwhile, at the Hamptons, Ramona and Leah bond over their childhood memories. And then, at the dinner table, the subject of Leah’s tattoo comes up — to which she responds that everybody has tattoos. And it seems the rest of the ladies don’t agree with her. Ramona even goes on to say: “I don’t talk to people with tattoos. But see, I talked to her, that’s why I said ‘touché.'” However, the situation escalates when Sonja chimes in and Dorinda comments: “And if she forgets it, you can just turn around and bend over.”

In another scene, Leah tells Sonja that she is annoyed with Dorinda’s rude behavior. And as expected, Sonja runs out and tells everything to Dorinda. Of course, Dorinda is not someone to let something go off easily. She confronts Leah and tells her: “I understand you told Sonja you have a short fuse; you can have a short fuse all you want, it’s just a fact, none of us have tattoos.” Leah, however, does not lose her temper and calmly replies: “I don’t feel like you would like to get to know me, but I hope I’m wrong.”

Well, Dorinda seems to have appreciated Leah’s composing demeanor and the ladies finally complete their dinner.

Read More: Where is ‘The Real Housewives of New York City’ Shot?