Is ‘The Dark Knight Rises’ Overrated?

The year 2012 saw the conclusion to Christopher Nolan’s take on the saga of the caped crusader of Gotham. Backed by two genre defining prequels that reinstated the massive popularity of an already iconic character, and with Nolan helming the sails on the Dark Knight’s story one last time, this one was a sure-fire hit. But is it really among his best works, leave alone occupying #63 on IMDb’s list of 250 greatest movies ever made?  Far from it, in my humble opinion. While it is not a bad film by any means, being in fact, consistently watchable despite all its shortcomings, this supposedly epic conclusion to the Dark Knight trilogy, for me, sticks out like a sore thumb in an otherwise celebrated portfolio of accomplished cinema by the maverick director. Here are ten reasons why The Dark Knight Rises may be Nolan’s worst to date, a Dent (no pun intended) in a crown of jewels, if you may. Yes, it is tad overrated. 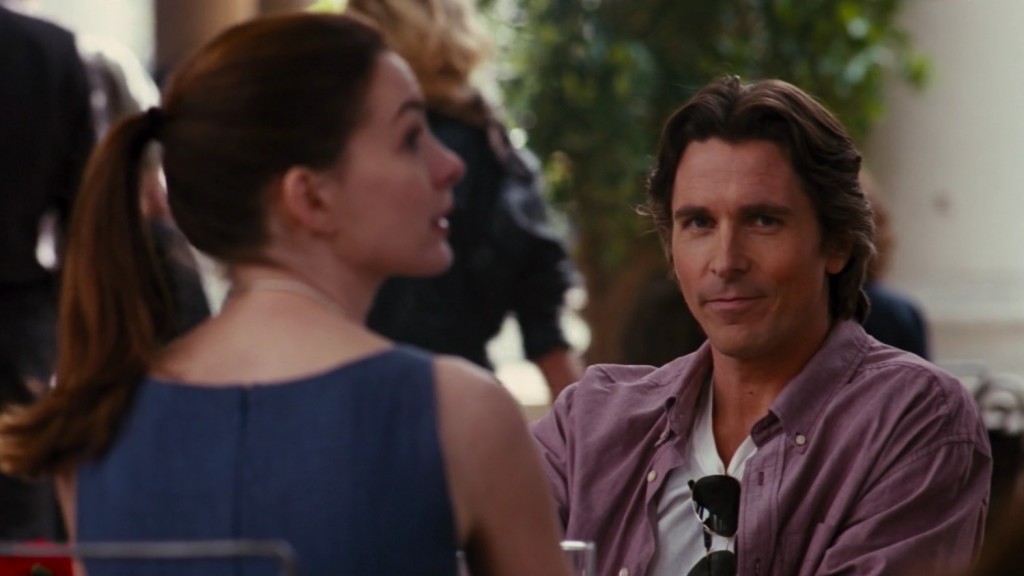 It would be unfair to state that Nolan’s other films are plot perfect products. No film is, in my opinion. The staunchest of film critics may find plot holes and contrivances in highly revered classics. His most recent work, ‘Interstellar’, for example, has been accused of being scientifically inaccurate and muddled with plot holes, and it may be for science aficionados. For a regular cine-goer, it is a perceivably well rounded film that keeps the viewer interested. The same may be said for Inception (2010), The Dark Knight (2008), The Prestige (2006) and even Memento (2000), but in the case of TDKR, the list of plot holes and glaring inaccuracies visible to even the most laid back viewer may end up being just shy of the length of this list.

Everyone in the film conveniently discovering Bruce Wayne’s secret identity, while it takes Jim Gordon, the smartest cop in the scene, 3 films and close to 12 years to figure that out? EVERY cop in the city being sent down to the sewers to hunt down Bane? Batman magically appearing in Gotham out of nowhere, having survived near death experiences in a remotely located pit, ready to fight, while being crippled for 8 years from that fall at the end of ‘The Dark Knight’? Bane holding a city at ransom with a nuclear time bomb and blowing up bridges? Wayne (supposedly) surviving the fall AND the impact of a nuclear explosion because he fixed the autopilot on the batwing? (Read that again.) I could go rambling on. 18 Pages. Front and Back. 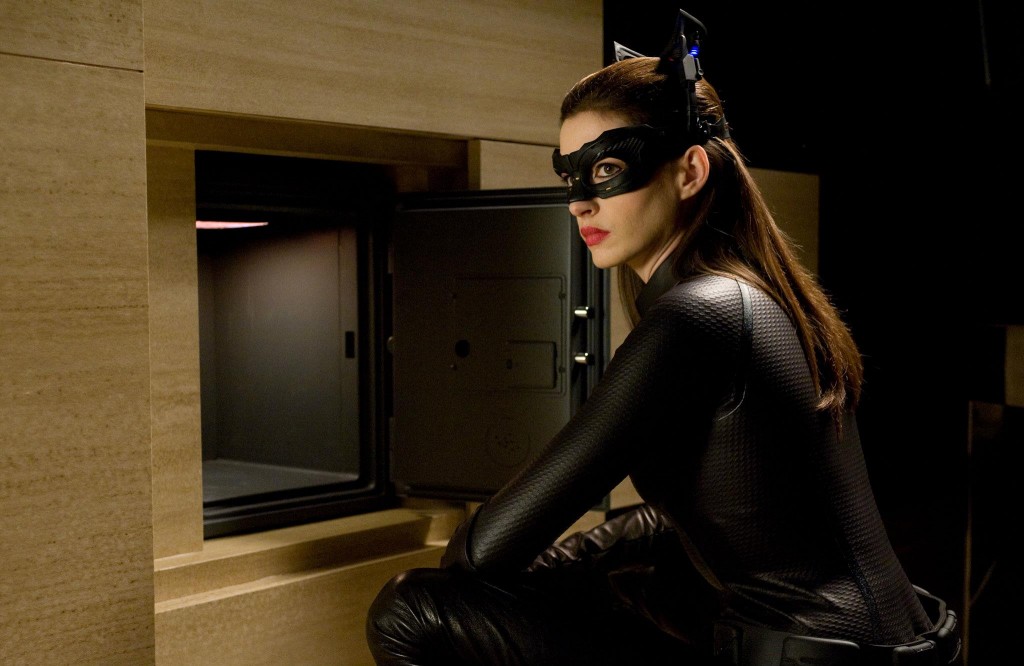 One of the many reasons Nolan’s films struck a chord with the general audience, apart from his cerebral filmmaking and interesting premises, is the way his characters are written. Often collaborating with Jonathan Nolan for the writing, the brothers etched out flesh and blood characters, giving them a humane side and making the audience root for them, even though they are immersed in increasingly impressive action set-pieces. Nolan ‘humanised’ the Batman; made us root for a thief to meet his kids again; made us believe that a father’s love could transcend time and space to reach his daughter; made us want Leonard Shelby to avenge his wife’s murder, all the while learning what happened to him as we progress, et cetera.

All of it owed to the power of strong characterisation. That is one area where TDKR suffers greatly. In a film about Batman, I didn’t care much about how he completed his journey from a street-crime fighter to the messiah of Gotham. Anne Hathaway as Catwoman, although seemingly fitting the sexy avatar of the cat burglar, has little reason to be there. Bane has a backstory, but that’s about it. Alfred is reduced to a mere sermonising presence. Jim Gordon and Lucius Fox, are they even there? 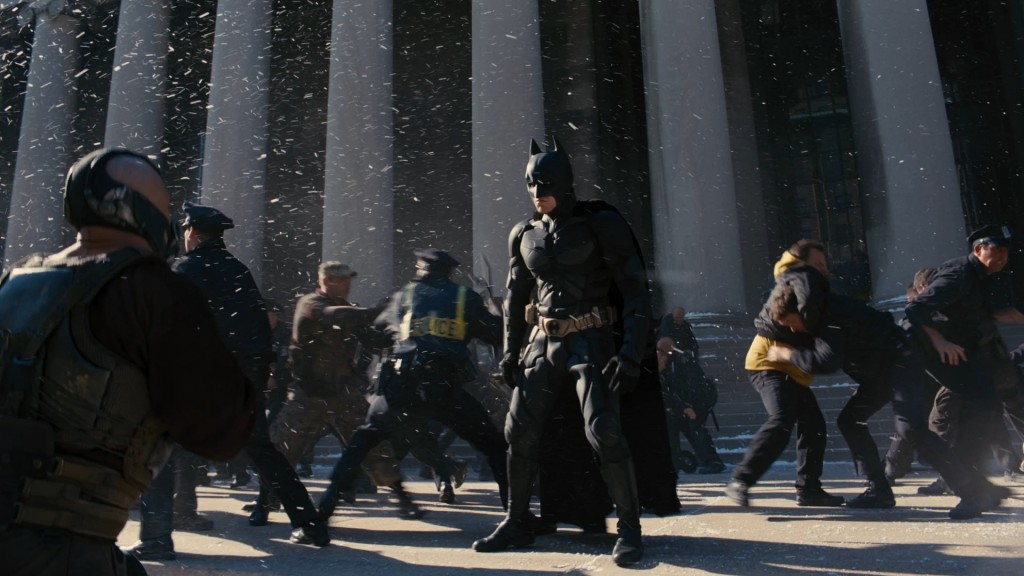 Remember Arthur (a beautifully restrained Joseph Gordon-Levitt) from Inception trying to fight a thug in zero gravity? Or the “Detach” sequence from ‘Interstellar”? Or Bruce’s training sequences in Begins? Or his flights of fancy as ‘The Dark Knight’? The last act in ‘The Prestige’? I am sure that you do.

Brilliantly executed, well enacted. These are instances that elevate an already strong movie to a whole new level by giving you that extra rush of adrenaline. Sadly, TDKR suffers from a severe shortage (Or absence altogether) of them. Excusing Bane’s escape sequence from the plane early on in the film, the action in TDKR seems staged at best. Chase sequences lead to nothing, and Batman’s fights, both hand to hand, or aboard one of his fancy vehicles, come off as contrived.  One of the key scenes in the film, where Bane “breaks” the Batman, is otherwise etched in the minds of comic book readers as an iconic fall for the hero. Sadly, the stationary sequences in the pages of the comics evoked more emotion. Having said that, I’m going to deliberately ignore discussing the climactic fight sequence between Bane and Batman. 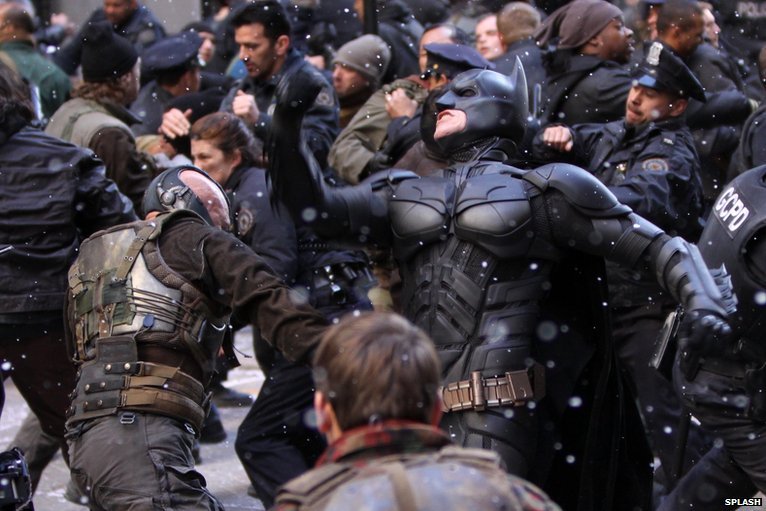 Nolan’s films are typically structured in a way so as to introduce the characters, make us aware of their motives, introduce them to the main problem while we proceed to the final act, (and then some more) to finally bring it all down in a crescendo of well edited and placed sequences, sometimes intertwining multiple storylines for the big reveal, often accompanied by Zimmer’s epic score. The score is there, alright, but little apart from that works. Batman’s return to Gotham is uninspiring, the fight between Bane’s thugs and Gotham’s cops completely derails into the unintentionally funny category, the big reveals are spotted miles away, and Bane cries.

Although the selfless act of sacrifice by Batman in the end could have redeemed the final act, the damage by then, has already been done.

The only case in point here is going to be ‘The Dark Knight’, for obvious reasons. Although, I felt a similar problem somewhat plagued Nolan’s most recent outing, ‘Interstellar’, it was more than made up for by its moments of silence and some stellar acting. Having a predecessor that has a quotable dialogue every 5 minutes as the film progresses seriously pummels TDKR’s case. Heath Ledger’s remarkably brilliant performance aside, what made the Joker such a formidable villain in the last film was his dialogues, lines that are quoted to date. Apart from some instances, the dialogues in TDKR are laughably bad. Doesn’t help that Bane has to speak through a face mask and Batman seems, well, just tired. 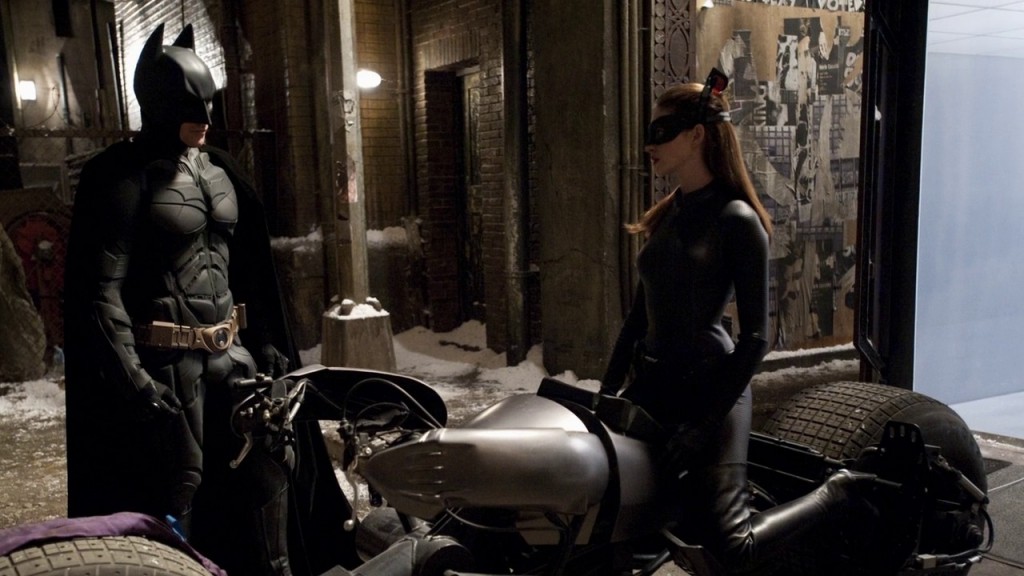 Character motivation is what drives a film forward, as the protagonists/antagonists race to achieve said motives. The absence or lack of them, would create a “herd of sheep without a shepherd” kind of situation, and that is what appears to happen a lot of times in TDKR. The reasons cited for Batman coming out of retirement are unsatisfactory. Bane terrorises Gotham city with a nuclear threat only to be revealed in the end to be a pawn in the “grand” scheme of things. Catwoman steals from Bruce, helps him, deceives him, and helps him again, with no clear motivation for her change of heart. Jim Gordon and some other players appear to be up to something, and let’s not get started on John Blake, aka Robin. 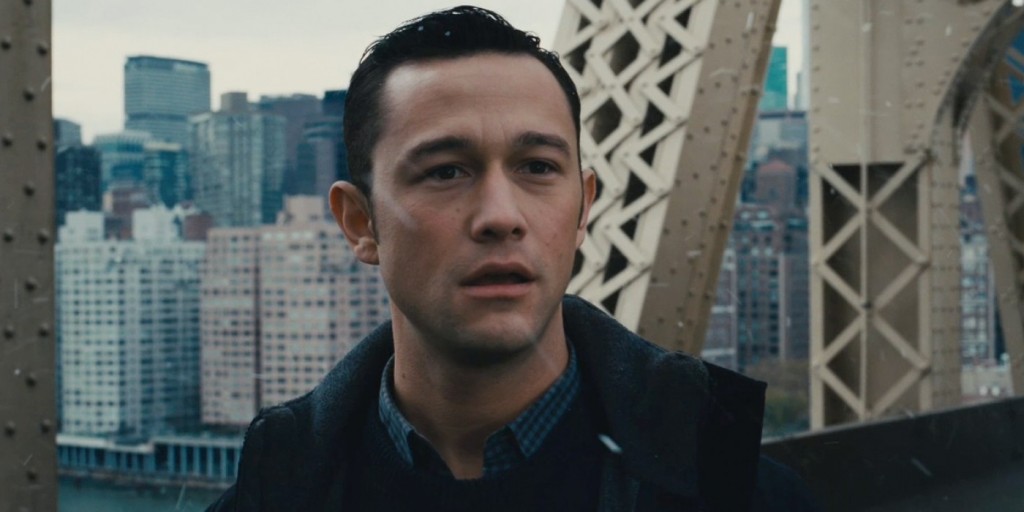 Falling shy of Nolan’s longest film (‘Interstellar’) by only 4 minutes, TDKR’s awkward pacing makes its 2 hours 45 minutes playtime only seem longer. While other Nolan films (except ‘Memento’ in my opinion) aren’t exactly lessons in pacing either, they manage to hold your attention for a good amount of time, delivering that much awaited climax in style. Here, the issue seems to arise not as much from its length and pace, as from the random variations of it. There are some scenes that take ages to deliver (Bruce’s prison escape) while there are some that are hurried to the extent where you have a hard time catching on to them (the reactor being turned to a bomb and Bane’s plan unravelling). To add to it, there were certain scenes where I was plain bored. That happening in a Batman film, is a sin I am guilty of. 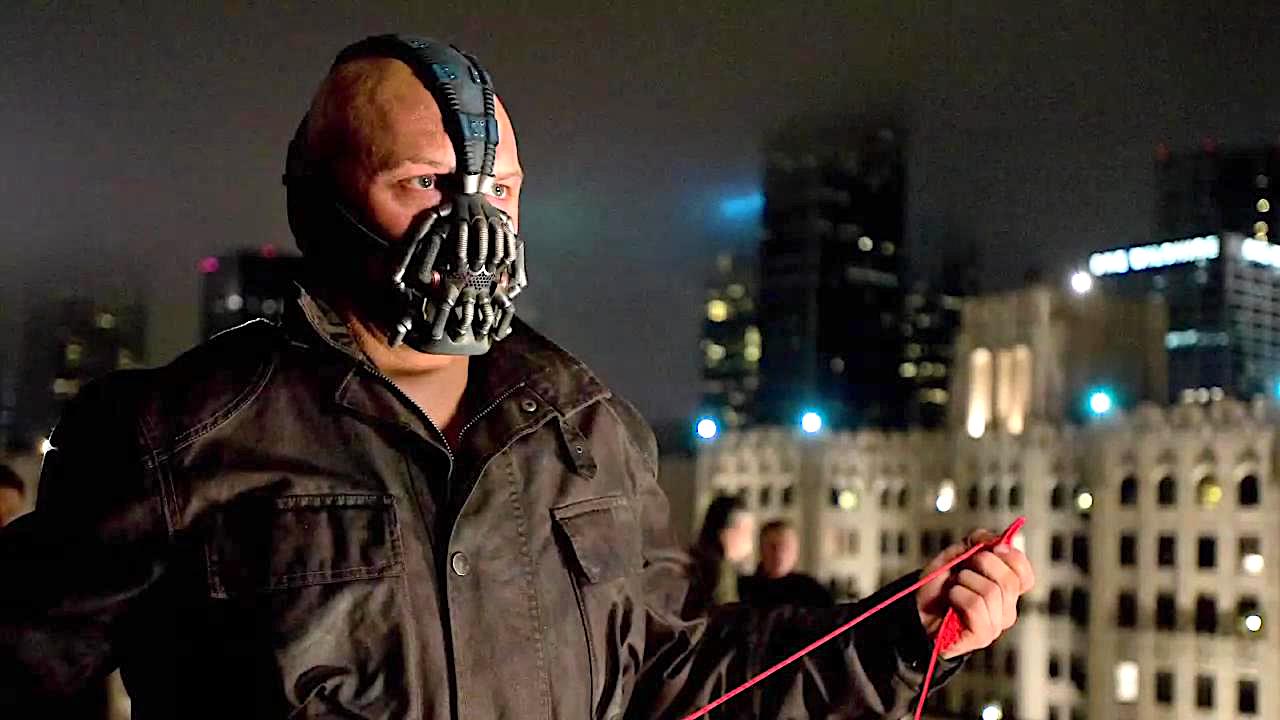 Let me say this at the onset, the posters of ‘The Dark Knight Rises’ are absolutely gorgeous. They succeed in setting Nolan’s envisioned dark and bleak visual style for The Dark Knight trilogy. Going in for TDKR expecting nothing less than a visual spectacle, I can’t say that I was disappointed, because the film indeed looked beautiful on the big screen. However, compared to other Nolan properties having first rate cinematography (‘Interstellar’, ‘Inception’), and even some other recent DC Comics properties (‘Man of Steel’, ‘Batman V Superman’ and the recently released ‘Wonder Woman’), the film pales in comparison. Memorable visuals are few, and far in between. Nolan’s insistence on using practical effects over special effects is completely justified though, by the film’s sweeping use of them. 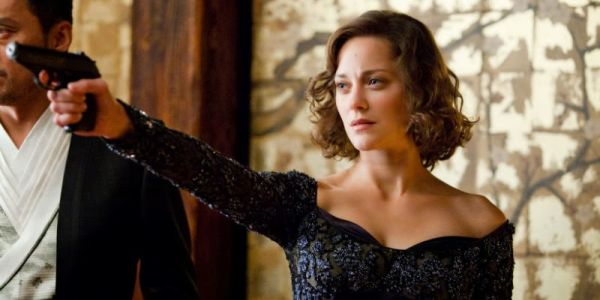 The Dark Knight rises boasts of an extremely talented ensemble cast of Academy Award winners and nominees, as is the case with most of his other films, some of them having collaborated with the director on multiple occasions (Sir Michael Caine, Joseph Gordon-Levitt, Tom Hardy, Marion Cotillard). It then comes as a setback of sorts that none of them gave a performance worth remembering, something that is highly unusual for Nolan’s films, be it Guy Pearce’s career redefining turn as Leonard Shelby, Al Pacino’s portrayal of a disturbed detective in Insomnia, Matthew McConaughey’s portrayal of a distressed father in ‘Interstellar’ or Heath Ledger immortalising the Joker on-screen. TDKR features not one such performance, or even close to it.

Christian Bale seems worn out, even seasoned actors like Gary Oldman and Sir Michael Caine come off as one dimensional, and you can’t help but feel that Tom Hardy’s Bane was a misfit. One particular scene where Marion Cotillard’s character dies towards the end of the film, is so bad that it’s good, something that is counterproductive for a film of this nature.

10. Lack of a Strong Primary Antagonist 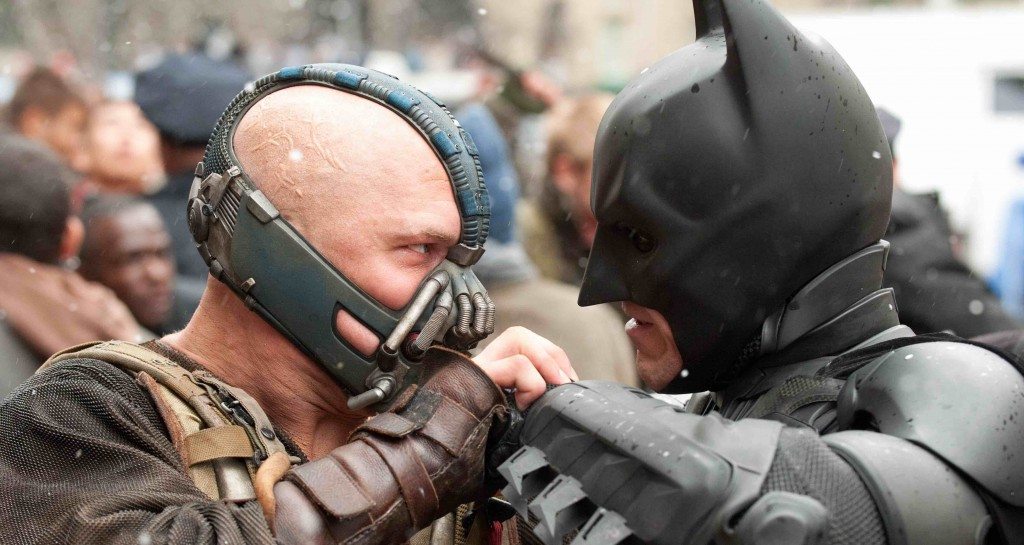 ‘The Dark Knight Rises’ has Tom Hardy in all his physicality, portraying the mercenary Bane, the primary antagonist of the film. Departure from the source material aside, the menace associated with a villain posing a city wide threat seems somewhat absent here, despite Gotham facing its biggest threat and Batman facing his strongest adversary yet.  What’s worse, is that he is (SPOILER) revealed to be a henchman figure to Miranda Tate/ Talia Al Ghul in the final 10 minutes or so, and is supposedly killed off in an unspectacular fashion by Catwoman, to be followed by Talia Al Ghul dying in a car crash. The DC fan in me never squirmed so hard. Marion Cotillard offered a more menacing turn as Mal in Inception, with close to 15 minutes of screen-time, and did I mention the Joker already?