Will There be a Red Dwarf Season 13 or is it Cancelled? 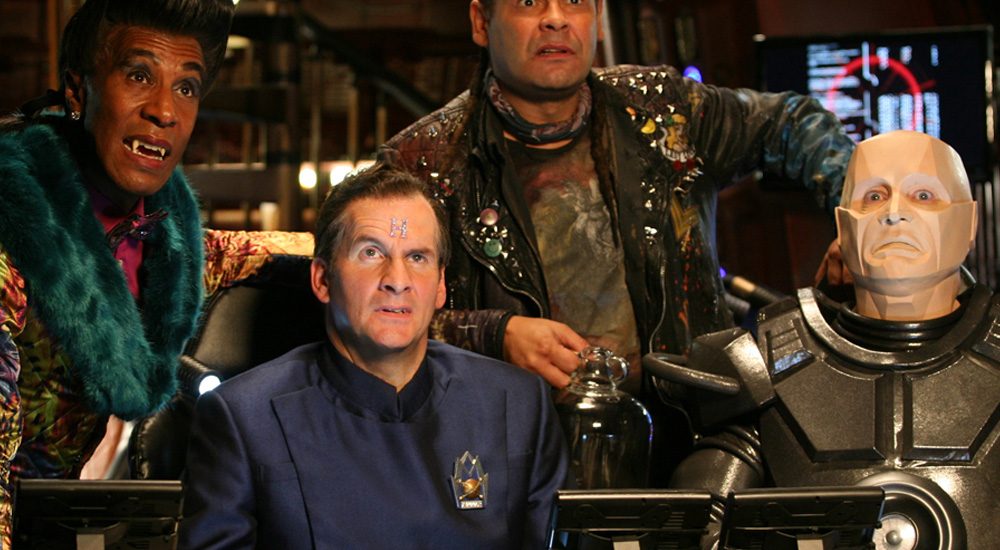 All the events of the comedy series take place in an eponymous mining spaceship — and hence the name. A multiple-award winner and a highly acclaimed show, it has spanned 12 successful seasons to date. So, will it be renewed for yet another season? Well, here is all we know about ‘Red Dwarf’ season 13.

Red Dwarf Cast: Who is in it?

Actor, DJ, and tv host, Craig Charles, stars as Dave Lister, a cheerful Scouser and a self-proclaimed vagabond. Lister is the lowest-ranking crew member on the ship and is lazy, snobbish, and demotivated. But he often manifests courage. He smuggles in an unquarantined cat and after being transported to the future, wants to return to earth, start a farm, open a diner, and live in Fiji. He is apparently the only surviving human and a foodie who holds an innate love for Indian cuisine.

The self-centered and highly unpopular Arnold Judas Rimmer (Chris Barrie) is prone to imposing bureaucratic norms and experiencing neurotic episodes. Because of his mistake, the Red Dwarf faces the cadmium II accident which leaves everyone dead. However, he is the only one who can keep Lister’s sanity under control.

The Cat (Danny John-Jules) is a humanoid entity that metamorphosized from Lister’s smuggled, real cat. It loves to while away its time eating and sleeping. Possessing poor social skills, Cat obsesses over its appearance and later, adopts the qualities of a selfish human.

Kryten (Robert Llewellyn) is a rescue Service Mechanoid from the crashed spaceship Nova 5. Although in the earlier episodes, he does not dodge from his  “behavioral protocols”, later, with the help of Lister, he begins thinking by himself.

Season 13 has been confirmed to feature Lister, Rimmer, Kryten, and Cat, returning and continuing on their various misadventures. The latest season also promises to feature some popular celebs in guest and cameo appearances.

Red Dwarf Plot: What is it about?

The story of ‘Red Dwarf’ begins sometime in the late 22nd century, when an accident kills all the crew members on-board the Red Dwarf. Its only surviving members are Dave Lister and his adopted, smuggled, and pregnant cat, Frankenstein. After three million years when the accident-causing radiation levels recede, Lister (who was kept on ‘statis’ mode by the computer Holly) is revived as the last human in the universe. Additionally, Holly also brings back Rimmer as a hologram to keep a check on Lister’s sanity. Joined by Cat, the trio embarks on several adventures in their spaceship, which involve occurrences such as time distortions, faster-than-light travel, mutant infections, and weird entities. As the episodes progress, the team is joined by a mechanoid named Kryten.

By the time the series reaches its fourth season, the Red Dwarf gets stolen and the team boards the smaller Starbug craft in order to retrieve it. Toward the end of season 7, the team discovers that Kryten’s service nanobots were the ones who had organized the theft. Once the team is back on their original ship, they face yet another problem when a metal-eating virus begins infiltrating the Red Dwarf. This causes all the members to evacuate the ship, leaving behind the four original, primary mates — Lister, Rimmer, Cat, and Kryten

Set against a sci-fi backdrop, ‘Red Dwarf; is essentially a character-driven, humor-packed comedy, with most of the laughs generated from Lister and Rimmer’s discussions — who hate each other but are forced to stay within the same ship.

Red Dwarf Season 13 Release Date: When will it premiere?

Now, as far as next season is concerned, Robert Llewellyn confirmed via a radio interview in May 2019, that the show has been renewed and season 13 is in the making. Its filming should wrap up by the end of 2019. According to Craig Charles, “Filming is going to commence in November through to the December and that’s all we can say really.”

The creators have not come up with an announcement of a release date yet. But considering it would take at least six months to finish the production, we can expect ‘Red Dwarf’ season 13 to premiere sometime in August, 2020. We shall update this section as and when we learn more. We expect the latest season to also air on Dave and consist of six episodes, just like its predecessors.

While we wait for an update on ‘Red Dwarf’ season 13 release date, you can watch the official trailer for season 12 below. You can also head to Dave if you wish to catch up on all the previous episodes from the show. If you want to check out their official merchandise, games, quizzes, and picture galleries, you can visit their official site.