Who Are Red Paladins in Cursed? 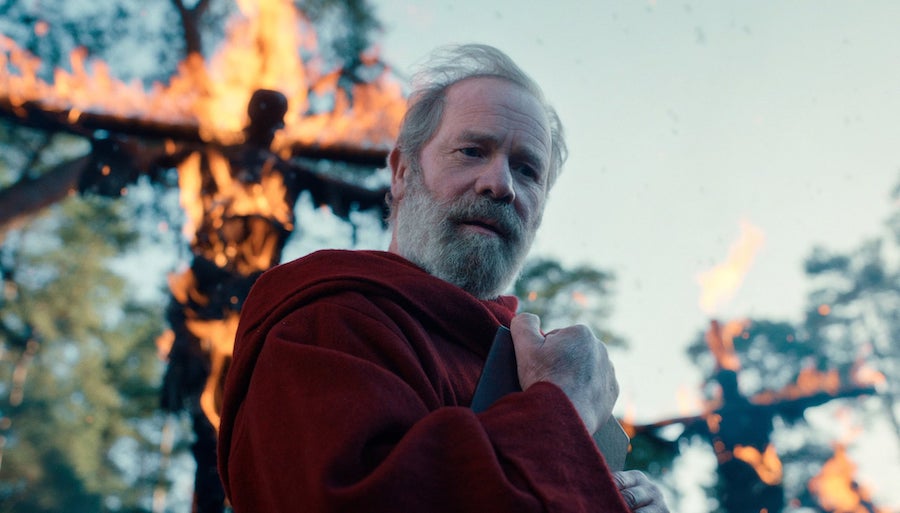 ‘Cursed’ is a fantasy drama full of magic and supernatural elements. It keeps us engaged with its exciting story and introduces us to the characters that we immediately come to like. But in doing so, it also gives us the villains that make our stomach turn. If it focuses on the love and humor between the characters, it also focuses on the savagery and brutality of the antagonists.

We get the first glimpse of the villain of the season in the first episode. Father Carden talks with a child in a quiet and calm tone. But as the whole picture comes into focus, it turns out that the priest, and his followers, are a barbaric bunch who don’t blink an eye before destroying villages. Who are these people and why are they so hell-bent on mass murders and mayhem? Who are the Red Paladin in Cursed? Let’s find out.

Who are the Red Paladin in Cursed?

While giving us a bunch of courageous and righteous characters, ‘Cursed’ balances the scale of its story by introducing the Red Paladins. Dressed in red robes and led by the ruthless Father Carden, the Paladins are out to kill each and every Fey in the world. They are backed by the Church, and their actions often come under scrutiny by their superiors. They are feared by the Feys as well as the general populace, who are forced to paint crosses on their doors when the Paladins come knocking.

Their biggest strength is the Weeping Monk, who has been brought up with the same values and is close to Father Carden. What makes them all the more dangerous is that they are motivated by a singular vision. They don’t have any prospects of power or glory or even fortune. It is the pure hatred in their hearts that drives them to commit genocide. They are ready to kill everyone and anyone, even children, who belongs to the Fey bloodline or wants to support them. They are brutal in their actions and dedicated to their cause, which makes them a force to be reckoned with.

Were the Red Paladins Real?

If you want to know whether the Church ever indulged in violence to force their religion, and killed people because they were different, then the answer is not “no”. Religion has, time and again, been used as a tool to incite fear and terror and push people to forego their original ideologies to fall in line with another one. Christianity hasn’t been untouched by this method and blood has been shed over the religion.

Now, did the Church ever have their own army to fight battles? Yes. Currently, they don’t have a de facto army at large, but they surely had one while fighting Crusades. In the Dark and Middle Ages, religious persecution under Christianity wasn’t unheard of. The eradication of the pagan religions and the infamous witch trials claimed a lot of innocent lives, and we see the same happening in the show.

As for a unit named the Red Paladin, there is none within the Church. One reference to the Paladins comes in the Matter of France. They are described as Twelve Peers, a group of the best knights in Charlemagne’s court, a counterpart of King Arthur’s Knights of the Roundtable. Unlike the knights who were more about adventures and quests, the Peers were much more inclined towards upholding and furthering the Christian model. They were also sent within the people to serve as judges and governors, and sometimes, had entire districts under their rule.

Read More: Who is the Weeping Monk in Cursed?