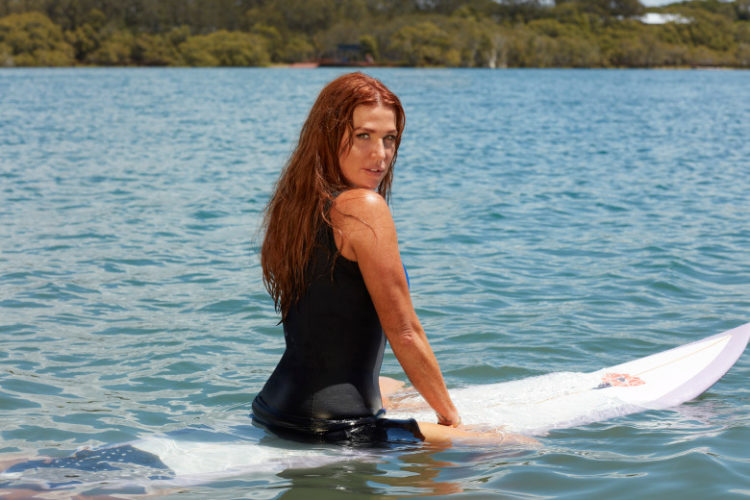 ‘Reef Break’ is a French-American television series that you should watch just for the protagonist and the lead actress who essays the character, Poppy Montgomery. If you find a cooler surfer who can give ‘James Bond’ a run for his money, you may stop reading this article.

Montgomery plays the role of Cat Chambers who used to perform several shady operations for a criminal organization before. Hence, her comparison to ‘James Bond’ is definitely unfair. It would be more suitable to make a comparison with a con artist. On the show, Cat is now a fixer for the governor of Nimitz Bay, a coastal town. Also, she is a professional surfer! Apart from all of that, there is also a love triangle in the mix!

‘Reef Break’ can be considered as ‘Baywatch’ with action (and a female character who has more to do than just running on the beach). The show is enjoyed by viewers for being ” breezy, bright, a wee bit sassy” (Boston Herald).  So if you’re looking for a comfortable action (we know that sounds like an oxymoron) show to cozy up to, ‘Reef Break’ could be your next favorite.

Where Was Reef Break Filmed?

One of the characters on ‘Reef Break’ is its setting: bathing in the sun and splashing on the coast. The backdrop for the crime drama breathes into the plot, characters and everything else on ‘Reef Break.’ The TV show is set in Nimitz Bay in the American territory, Reef Island.

However, for those of you who don’t know, there is no American territory known as Reef Island. The place depicted on ‘Reef Break’ is completely fictional. Hence, Nimitz Bay is also a fictional place that you will not find on a globe. So where are the picture-perfect, coastal places depicted on the show actually located? Contimue reading to find out.

‘Reef Break’ is filmed in the nation where the lead actress, Poppy Montgomery was born. No wonder she owns every frame on the television series.

‘Reef Break’ is filmed entirely in Queensland, Australia. To be more specific, the series is filmed in the city of Gold Coast in South East Queensland. The city is known for its long, sandy coastline which is favorited by surfers. It proves to be the perfect reel twin for the fictional Nimitz Bay.

Coming Up At 10 Pm #ReefBreak [ @reefbreakabc ] On ABC Staring Poppy Montgomery @poppymontgomery Everybody Needs A Break, Why Not A Reef Break on The Beautiful Gold Coast of Australia !! pic.twitter.com/r8QDV4pRQH

However, before moving on to the places in Gold Coast where filming was carried out, it is integral to note the production facility which serves as the base for the French-American production.

A large part of filming for ‘Reef Break’ is carried out at Village Roadshow Studios in Oxenford, Queensland. This is where most of the interior filming for the series is carried out. The production utilizes stages 2, 3 and 4. Sprawling over almost 157,000 square feet, the studio boasts of an extremely talented and experienced crew, thanks to several projects with high production value having been filmed there. For instance, ‘Aquaman,’ ‘Thor: Ragnarok’ and ‘Godzilla vs Kong’ are some of the recent productions to have been filmed at Village Roadshow Studios.

According to Ausfilm, the makers of ‘Reef Break’ also filmed on location extensively. Filming was carried out on Broadbeach, Main Beach and Tamborine Mountain in Gold Coast.

Additionally, post-production work on the series was also conducted in Queensland, Australia. The companies, The Post Lounge and Resin were tasked with the responsibility of post-production.