Reno 911 Season 7: Everything We Know 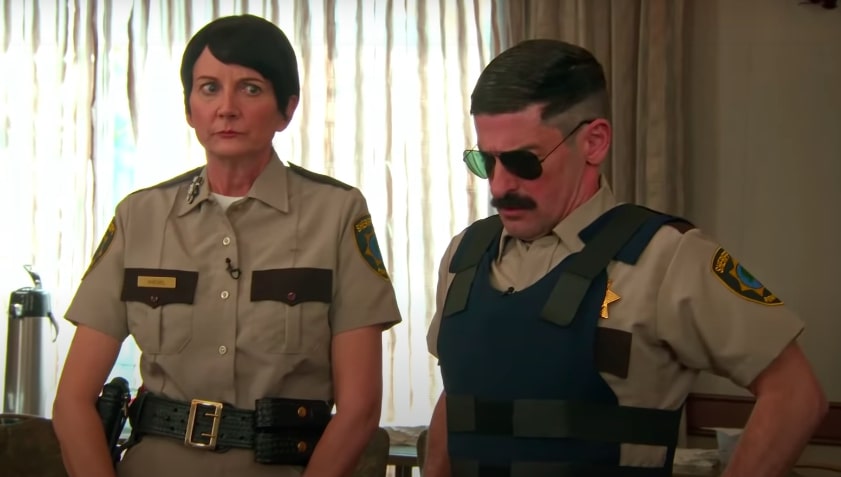 Are you ready for a blast from the past? ‘Reno 911!’ is returning on Quibi, a short-form mobile video streaming platform. The popular comedy series enjoyed its original six-season run on Comedy Central, between 2003 and 2009. For those who have not followed the series, it is a mockumentary-styled parody of documentary shows, especially ‘Cops.’ We have comic actors playing the parts of police officers here.

With mostly improvised material that keeps scripted content to a minimum, ‘Reno 911!’ has had us laughing in the past. Now, it seems the show is returning to leave us in splits once again. Curious to find out about ‘Reno 911’ Season 7? Here’s everything we know.

Reno 911 Season 7 Release Date: When Will It Premiere?

‘Reno 911!’ was greenlit in December 2019, and reports of filming emerged in February 2020. Now, we know that ‘Reno 911!’ Season 7 is slated to release on May 4, 2020. The show makers always intended to ensure that the series reaches the 100 episode milestone. Therefore, they were keen on reviving it. Initially, they spoke to Netflix, but the talks did not go anywhere. Now, with Quibi, they have found the perfect home, as the platform’s short format is an ideal fit for the series.

It has been confirmed that the original cast members of the show are all returning. We have Robert Ben Garant, Thomas Lennon, and Keri Kenney-Silver, who are not just starring but have also written the latest season. Other members who are rejoining them include Niecy Nash, Wendi McLendon-Covey, Cedric Yarbrough, and Carlos Alazraqui. Cast members like Ian Roberts, Joe LoTruglio, and Mary Birdsong, who joined the later seasons of the original run, are also slated to return.

‘Reno 911!’ takes us into the inept Reno Sheriff’s Department, which is a fictional law enforcement office. We see Lt. Jim Dangle head the department in the satirical series. Assisted by his deputies, Dangle goes about trying to ensure peace prevails in his area. Understandably, it is rather difficult because the characters are quirky on their own, but put together as a team; they are a complete disaster. It results in several humorous situations.

We have seen Dangle and his deputies tangle with several issues like substance abuse, mental health, racial and social concerns, politics, and economy. As the sheriff’s department tackles the problems in their unique way, one might wonder if the new season will see a degree of continuity.

Being mostly improvised and unscripted, we do not expect Season 7 to pick up from where Season 6 has left off. Instead, one should expect the show to tackle new themes that are pertinent to present audiences and tie-in with the current social scenario. In the past, we have seen the team is often bested by the guys they are trying to catch. Moreover, the cops have been boisterous, resulting in some hilarious situations. Hopefully, both the elements make a comeback in the new season.

Ahead of the Season 7 release, Quibi has dropped the trailer for an all-new ‘Reno 911!.’ Check it out here to get a taste of the antics you can expect in the coming days.