When Will Restored by the Fords Season 3 Premiere on HGTV? 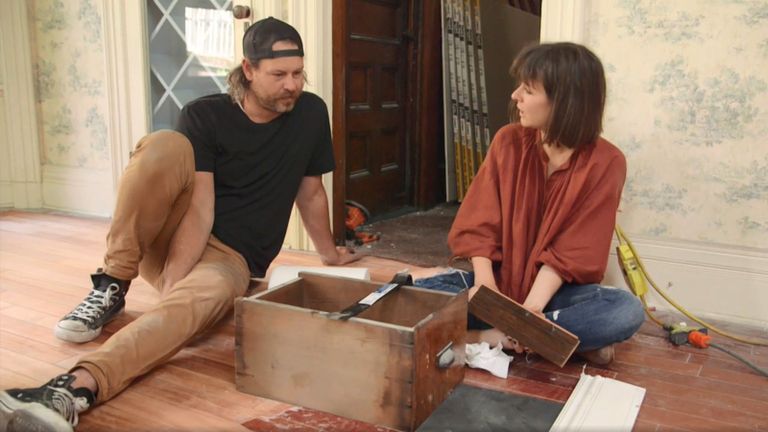 ‘Restored by the Fords’ is a new reality TV show that airs on HGTV. The series first premiered on January 2, 2018. The show centers around two siblings named Leanne and Steve Ford. They are on a mission to renovate old homes in the rural parts of the cities. Leanne is the home designer, and people usually refer to her as the “house whisperer.” She puts her brain as well as her heart behind the project. Her brother Steve flaunts his “MacGyver-like” carpentry skills to bring her crazy ideas and abstracts to life. These siblings have turned various old and outdated houses into masterpieces. This duo is all set to rock the TV series over the seasons.

The series has garnered a solid fan base despite being relatively new and is one of HGTV’s many additions which have to deal with obtaining or preparing the dream home for people to live in. However, while shows like ‘Caribbean Life‘ and ‘Log Cabin Living‘ deal with finding the dream home for buyers who want to get away from the city life, ‘Restored by the Fords’ is more along the lines of not giving up when you have got something great, instead improving on it, to get a version of a dream home.

The show has had two successful seasons so far. Now the question is, will there be a ‘Restored by the Fords’ season 3? Let’s find out.

Restored by the Fords Season 3 Release Date: When will it premiere?

While HGTV has not yet renewed or canceled the show yet, there is no reason to believe that a new season will not be greenlit, considering the already heightened popularity of the show. Our best guess is that if the show does get renewed, ‘Restored by the Fords’ Season 3 can release sometime in March 2020. We will update this section as soon as we hear more.

Restored by the Fords Cast: Who is in it?

The main cast of ‘Restored by the Fords’ includes Steve and Leanne Ford. They are siblings and have grown up together as best friends. While Leanne is always the one with the vision, it is Steve who does the handiwork. They make a great team, and Leanne admitted as much, saying, “It’s very handy to have a handy brother, I’ll tell you that”. The siblings first began working together on Leanne’s first home, which she wanted to modernize despite maintaining its old world charm. When other contractors turned them down, she did a little impromptu demolition of her own and then fell back on the safety net of her brother to fix them up according to her taste.

This works out well for them actually, as Leanne has spent a lot of time in the creative fashion industry, as a stylist and a creative director both in New York City and Los Angeles. Her interests overlap in her description and vision for the interior designing, and she says, “Honestly, the same thing in fashion is what I love about interiors, which is just new ways to connect things; new ways to put things together; mixing old and new, shiny and rusty. And all of those things together are what makes a home interesting”.

Steve, on the other hand, did not start off as a full-time contractor but had been doing part-time construction gigs since the time he was in high school. Thus he was no stranger to this line of work and was uniquely suited to actualize his sister’s vision. Leanne was all praises for her brother saying, “My favorite part about working with Steve is that he can make anything happen. Any crazy idea I dream of, any idea I dream up, he can make happen. That’s very nice in a contractor.”

What is Restored by the Fords About?

‘Restored by the Fords’ centers around the brother-sister duo, who go around fixing houses in Pittsburgh and nearby areas. However, fixing might be a reductionist term to use here for what Leanne does. She breathes magic into the house with her ideas of interior design, which her brother then executes. If Leanne is the brains of the entire thing, then Steve brings the technical skill and knowledge required to turn dreams into reality.

Just because a house is old does not mean that it cannot be modernized. This is the core philosophy that Leanne and Steve bring to the table. It is often hard to hit the right balance between antiquity and modernity, but the siblings get it right. Pittsburgh serves as a good ground for this experiment as it has plenty of old homes, and Steve and Leanne just lap them up, bringing their own set of changes. With a variety of architecture available in the city, every renovation is a challenge and before they are through with it, they ensure that it becomes a work of art.

What stands out in the show is the kind of on-screen chemistry that the two bring. However, this is not really surprising, considering that the siblings have been best friends since childhood and have always had a harmonious balance in the division of labor when it comes to renovations. They each know their areas of expertise and respect the other to give them that space and thus function in a complementary manner.

Hopefully, in the upcoming season, the series will continue in a similar fashion and now that Leanne is a mother, it remains to be seen if her family life has an impact on her work, and if so, then the extent of it could change the dynamic between the siblings. It remains to be seen what new challenges they take up, and which old establishment gets the unique Ford treatment when the new season arrives.

Restored by the Fords Trailer:

While we wait for an update on season 3, check out the season 2 trailer to refresh your memories. If you haven’t seen the show yet head over to HGTV to catch all the episodes of the previous seasons.