Revenge Prank: Everything We Know 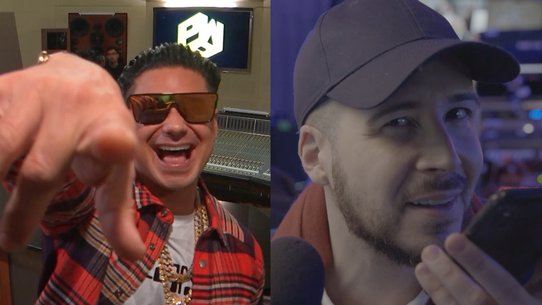 ‘Revenge Prank with DJ Pauly D and Vinny’ pairs up MTV’s favorite, dynamic duo as they surprise unsuspected bystanders with crazy pranks. Each episode sees the stars teaming up with a target of a viral internet prank who wants payback on a friend, family member, or loved one who had previously embarrassed them.

As the narration says in one of the episodes: “What if someone you knew pranked the s**t out of you in front of the entire world? Enter Pauly and Vinny. They’re helping the pranks get payback with the wildest pranks ever. If you can dream it, they can prank it.” Throughout the season, we see the guys scheme a skydiving event, organize a fake SWAT team, and jump out of a coffin in a room full of people.

Well, these over-the-top pranks serve as the ultimate revenge stunt! Echoing the vibes of Ashton Kutcher’s ‘Punk’d’, the series has some outrageous practical jokes in store. Sounds exciting right? So, do you wish to know more about the show? Read on!

The titular hosts of this super-fun series, namely, DJ Pauly DelVecchio and Vinny Guadagnino, are no strangers to reality tv. You might remember DelVecchio from his remarkable pranking skills from ‘Jersey Shore‘. He used to come up with elaborate schemes, which would take his roommates by surprise. In the end, he would pop out from behind a door, screaming, “Prank war champion!” And wherever he goes, he is bound to be accompanied by his all-time buddy, Guadagnino. The duo also appears in MTV’s hit dating series, ‘Double Shot at Love’.

How to Watch Revenge Prank Online?

New episodes of ‘Revenge Prank’ will drop every Thursday at 9 pm ET/ 8 pm CT, right after ‘Double Shot at Love’ season 2, which airs on Thursdays at 8 pm ET. Just tune in to MTV at the above time slots, with the help of a cable subscription, and you are all set. If you are more of an online watcher, you can also catch the episodes on MTV’s official website, right after their tv premiere.

You can additionally stream ‘Revenge Prank with DJ Pauly and Vinny’ on MTV with a live TV streaming service without a cable or satellite subscription. Most of these platforms also offer a free trial. Some of the popular cable-free options to stay up-to-date with the show are Fubo TV, Directv, YouTube TV, Philo TV, Hulu With Live TV, and Sling TV. Almost all MTV shows land on Amazon Prime, following their television release. We will update this section as soon as ‘Revenge Prank’ is available on the streamer.

Check out the trailer for season 1 right here.

Read More: Where Is Double Shot At Love Filmed?