TIFF Review: ‘Beasts of No Nation’ is Dark, Terrifying and Powerful 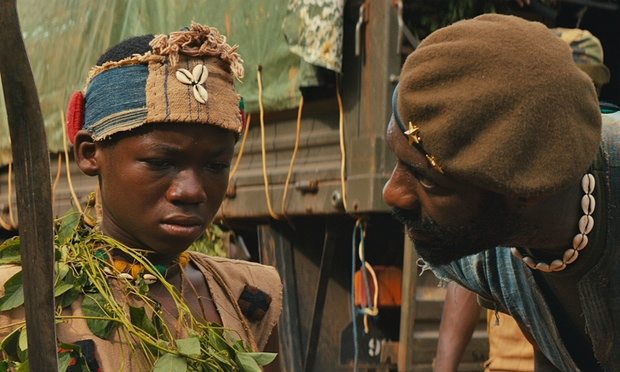 Every few years comes a film that reminds us that movies are an exciting art form, that certain films have the power to elevate the art form. In the seventies, it was Apocalypse Now (1979) which altered the lang of the cinema with its surrealistic nightmare of Vietnam; in the eighties it was Raging Bull (1980), a ferocious caldron of a film about a man at war with himself; the nineties gave us Pulp Fiction (1994), a kick ass, wild ride of a film that announced the arrival of a major new talent, and Steven Spielberg’s masterful Holocaust film Schindler’s List (1993), a virtual documentary like study of one mans private war against the Nazis; the 2000s gave us There Will Be Blood (2007), Paul Thomas Anderson’s spiky study of greed, while in the period 2010-2015, we have ‘Beasts of No Nation’, a film that might very well be counted in the same vein.

A seething study of war in Africa, where a psychotic Commandant portrayed with alarming intensity by Idris Alba trains young boys to be killers for his cause, which seems to be against anyone who does not do his bidding. We saw something akin to this in Blood Diamond (2006), though that film had something else as its main narrative, and this one explores just that happening. The picture is seen through the eyes of a young boy, Agu (Abraham Attah) who loses his parents and is taken in by the commandant, who senses an anger in the boy who needs to be unleashed, that he can exploit. What he does not count on is the boys innocence and love of life, a child who misses his parents and the loving family he once had, his friends, whom he played with in their village. Yet that innocence will be eroded slowly, but what is incredible is that the child holds onto his hope. Surrounded by the most beauty visual images of lush jungle, yet asked to commit the most horrific acts the boy evolves, and though horror is all around him, he struggles to hold onto his past ands his decency, the lessons his father taught him. Abraham Attah is simply a revelation as the child, his large eyes offering windows into his soul, which is being assaulted at every chance by the vicious, seething Commandant, a deeply psychotic man exploiting children to do his bidding, yet though oddly drawn to the charismatic leader.

In this role Idris Elba is light years away from his superb performance as Mandela a couple of years ago, and simply extraordinary, raging with hatred and purpose. He is among the most terrifying villains you would have seen recently, yet never what we expect, which is what makes the performance all the more frightening as her commits each atrocity with such dutiful purpose.

Fukunaga, who has worked on the script and film for a number of years does a stunning job of directing the picture, allowing the color to slowly seep out of the film as the boy becomes more engrained to the Commandants way of thinking. He shoots the picture very much through the eyes of the child, so the initial chaos of the attack on the village is rightfully shot with hand-held cameras and is chaotic on purpose. This is first film from Netflix and it is a hell of a way to start and a bonafide masterpiece.