All throughout Season 5 of ‘Better Call Saul‘, we have seen Jimmy McGill toying with the idea of eventually becoming Saul Goodman, completely. Always an anti-establishment figure, Jimmy also a grand sense of self, which coaxes him to try and have his own way in every situation.

While there’s always been a bit of Jimmy remaining, the latest episode sees Saul Goodman taking over. It remains to be seen whether this leads our lawyer to immediate tragedy, or the eventual tragic consequences, that awaits him at the end of ‘Breaking Bad‘. Read our recap and review of Episode 7. Spoilers Ahead! 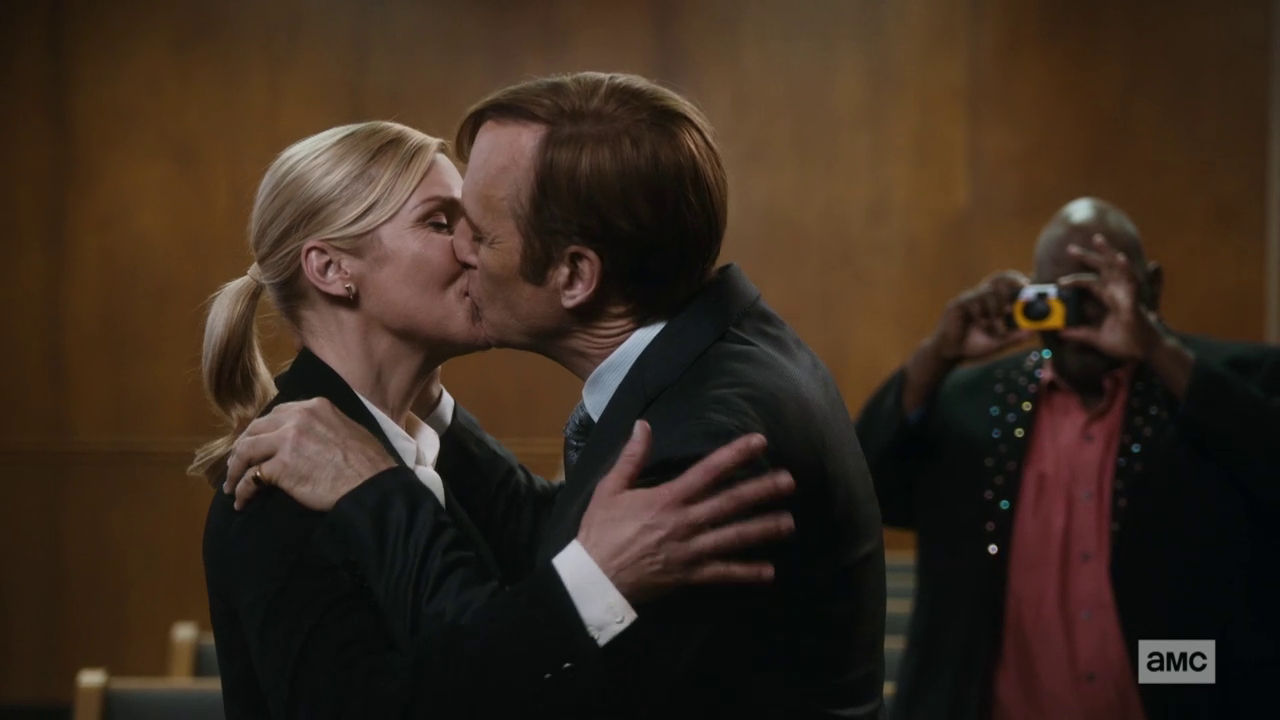 Titled ‘JMM’, the episode sees Kim and Jimmy in court, getting married. Soon, they go off to tackle their respective workdays. Kim accompanies Rich to Kevin’s office. The two try to make amends with Mesa Verde. Meanwhile, Jimmy has to represent Lalo in court, after Mike’s stunts get the Salamanca cartel member, arrested.

Kim handles her side of the business with a degree of assertiveness. Jimmy is faced with the dilemma of whether he wants to be a ‘friend of the cartel’. He pulls some strings to represent Lalo fantastically, in court. Moreover, after his marriage, he’s more open to Kim and tells her about his client.

While Lalo has a good day in court, Gus is tied up in the business side of things. He has to allay all of Madrigal’s fears after they have lent him quite a lot of money. Gus also seems to be playing the long game with Lalo, as he blows up his own outlet, keeping with Lalo’s instructions to Nacho.

As for Mike, he seems to be in a good place, willing to play the cards he’s been dealt, and makes up with his family. Jimmy, on the other hand, still seems affected by Chuck’s death, and roars and raves at Hamlin in the corridors of the courthouse. 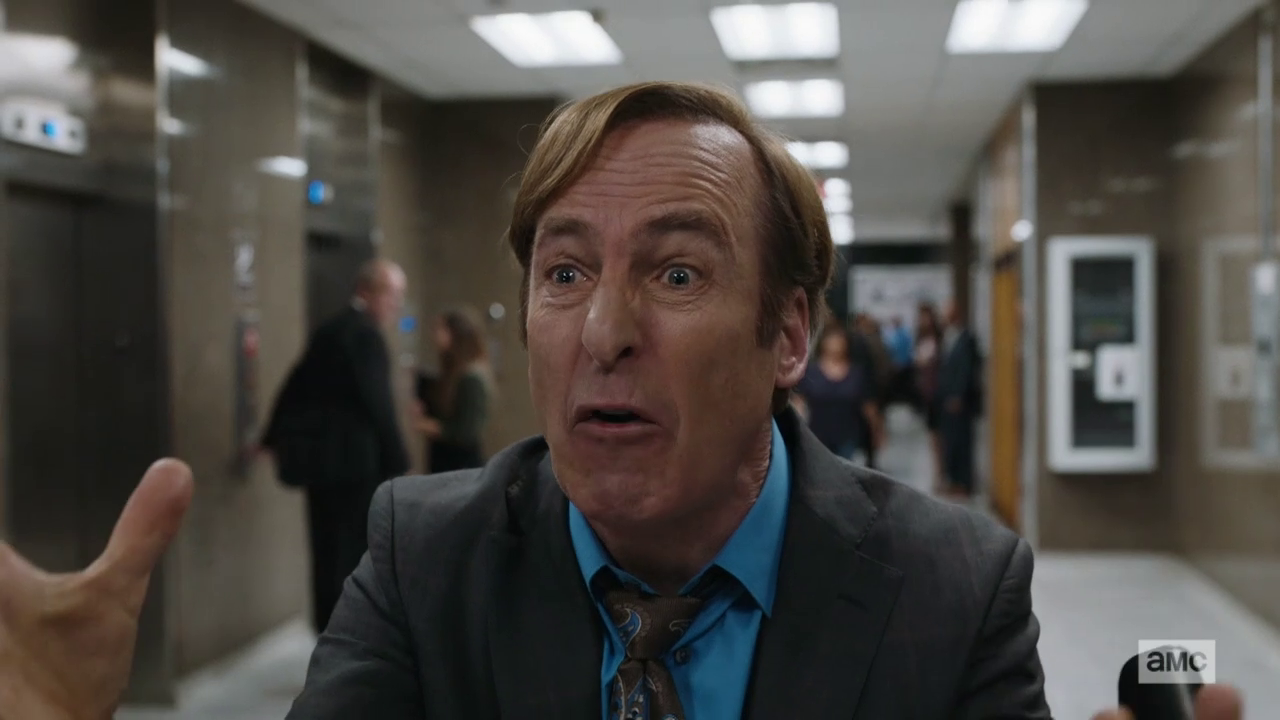 The episode’s title can be deciphered in three different ways. JMM can stand for James Morgan McGill, “Justice Matters Most”, as Jimmy coins for himself, or Just Make Money. It appears that Jimmy has already moved past ‘justice matters most’, and gone on to ‘speedy justice for you’.

However, it is Lalo’s suggestion that eventually becomes the very ethos of Saul Goodman – Just. Make. Money. Saul is not interested in morals, ethics, or emotions. He is out to get rich quick. He’s always been this way since Slippin’ Jimmy ran cons in Chicago. While we know Saul eventually uses the show’s title as his catchphrase, Lalo’s term remains etched as Saul’s cornerstone.

Similarly, Lalo opens the doors for a new world to Saul. He can be a friend of the cartel if he helps out Lalo. We don’t know how this will play out exactly. By the time we see Saul in ‘Breaking Bad’, he has connections to the world of cartels but is not a heavy hitter himself. Therefore, the relationship with the Salamancas is not likely to be fruitful.

This episode is perhaps one of the best when it comes to capturing the transition between Jimmy and Saul. It starts and ends with Saul in the courthouse. The first instance, however, is semi-sweet. Kim and Jimmy do intend to go through with the marriage, seemingly due to spousal privileges, which will prevent Kim from testifying against Saul’s indiscretions.

However, we see a much more sensitive side to Jimmy, as he feels Kim might be getting the short end of the stick. There’s also a bit of Jimmy left when he comes forth and confesses about the opportunity from Lalo. Ultimately, Kim and Jimmy’s wedding marks the start of Kim’s tragic course. Saul seems to recognize this too, but Kim has confidence in her hare-brained scheme of the marriage ensuring Jimmy’s honesty to her.

This brings us to the second instance in the courthouse, where Saul is representing Lalo. The episode has a wonderful cut scene, where we see Jimmy looking at Whalen’s family (Whalen is the man Lalo killed while trying to uncover the secret of Gus’ lab). He seems genuinely remorseful, and yet, the scene cuts to the next instant. Saul is on his feet, and fighting to secure Lalo’s bail. Almost like one of Walter’s fugue states, Jimmy seems to be gone. Saul has taken over, and he is not playing nice.

Undoubtedly, years from now, this episode will be revisited as the moment Jimmy allowed Saul to take over, in the courtroom. It also remains an instance of the show makers taking a liking to the character, to an extent that they decide to leave the moment of transformation off-camera, giving us a jarring but highly impactful cut scene.

Outside the courtroom, we have yet another instance of Saul Goodman’s mightiness. Through powerful imagery, we see Jimmy looking at the Whalen family grieving. The camera is placed strategically, to see just half of Jimmy’s face. It captures the duality of Saul and Jimmy perfectly.

Ultimately, we come to the end of the episode, where Saul has the outburst at Howard Hamlin. The first time Jimmy had met Hamlin, he’d put across a good impression of Arthur Jensen’s speech in ‘Network’, about meddling with the forces of nature. This time, as Saul, there is no impression, just Saul’s own grandioseness. The speech is remarkably reminiscent of Walter White telling Skyler that he is the one who knocks.

Saul is beginning to embrace his god complex, as he follows Howard, shouting about lightning emanating from his fingertips. The camerawork is again exquisite here, almost a tip of the hat to the ‘Birdman‘ scene, where Michael Keaton’s character walks along the pavement with Birdman whispering in his ear. Saul’s forceful speech drives Howard out of the courthouse, in the episode’s last striking image.

The courthouse now belongs to Saul Goodman. Whereas Jimmy greased the wheels at the courthouse, to get his way, Saul is much more aggressive, and much more amoral (which will help Walter White in the future). For now, he is content to remain on his course, and just make money. And thus, ‘JMM’ comes to an end, becoming one of the strongest, and best-executed episodes in this season of ‘Better Call Saul’.