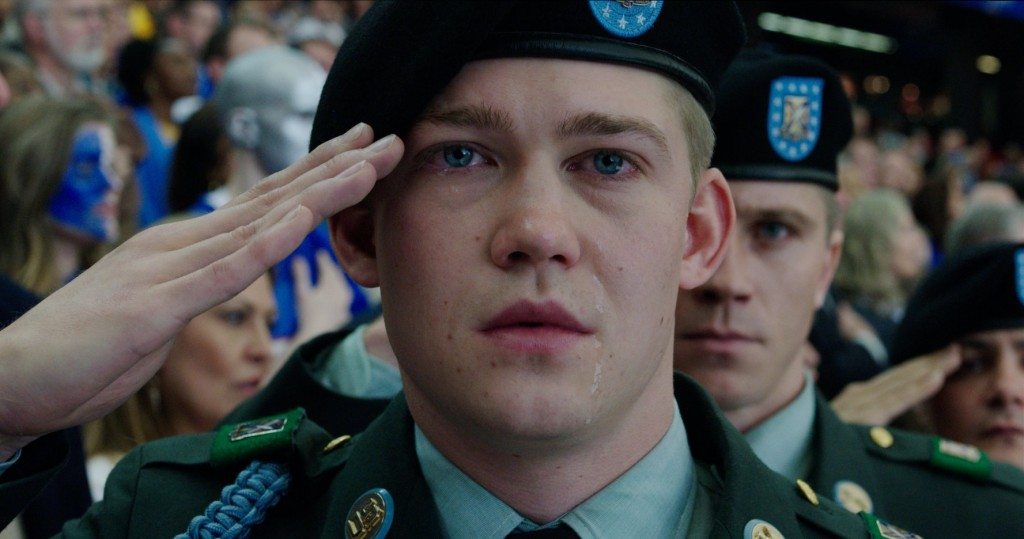 Ang Lee’s ‘Billy Lynn’s Long Halftime Walk’ is the skeleton of a movie that could have been. There’s hope for something great sprinkled throughout the movie but, sadly, it doesn’t add up to much.

Most of the talk surrounding the film has been about Lee’s decision to shoot the film in 3D, 120 frames per second, opposed to the standard 24. There are a very limited number of places that are capable of showing a movie in this format, so I saw a normal 2D version, without the allegedly distracting high frame rate.

Most qualms I’ve heard about the film were regarding the high frame rate but you have to give Lee some credit; he isn’t afraid to try new things. It’s unfortunate that ‘Billy Lynn’s Long Halftime Walk’ wasn’t a stronger film to overshadow its technical problems.

The story centers on the Bravo Squad, who return home from a tour in Iraq to a victory march at the 2004 Super Bowl. Billy Lynn (newcomer Joe Alwyn), a 19-year-old decorated hero, gets the brunt of the attention, seemingly to his dismay. His family is excited to see him, including his sister Kathryn (Kristen Stewart), who begs for him not to return, fearing he may never come back.

The majority of the film takes place at the football stadium, incorporating flashbacks to Iraq when they were in active duty. The squad, led by Dime (Garrett Hedlund, the film’s strongest performance), are paraded around next to Destiny’s Child and celebrated for their services. There are promises of movie deals thrown their way by fast-talking agent Albert (Chris Tucker) and Norm (Steve Martin), who might be interested in bankrolling the film.

‘Billy Lynn’s Long Halftime Walk’ has several affecting moments and delves into some interesting questions about PTSD, especially with these characters who are thrust into the spotlight upon their return.

Mere moments don’t make a film, however. Even seeing the film in its normal frame rate, ‘Billy Lynn’s Long Halftime Walk’ suffers from distracting directorial choices by Lee. Several conversations between characters are shown with a close-up of the character speaking directly to the camera, which will remove you from the conversation completely. The movie jumps around so much and is haphazardly cut together (by Lee’s usual editor Tim Squyres), that there isn’t much of a chance to become emotionally involved in what should have been an emotionally charged film.

‘Billy Lynn’s Long Halftime Walk’ created such a beautiful trailer that it was easy to be excited for this film. It quickly fell from an Oscar contender to something you might not remember in the months to come.