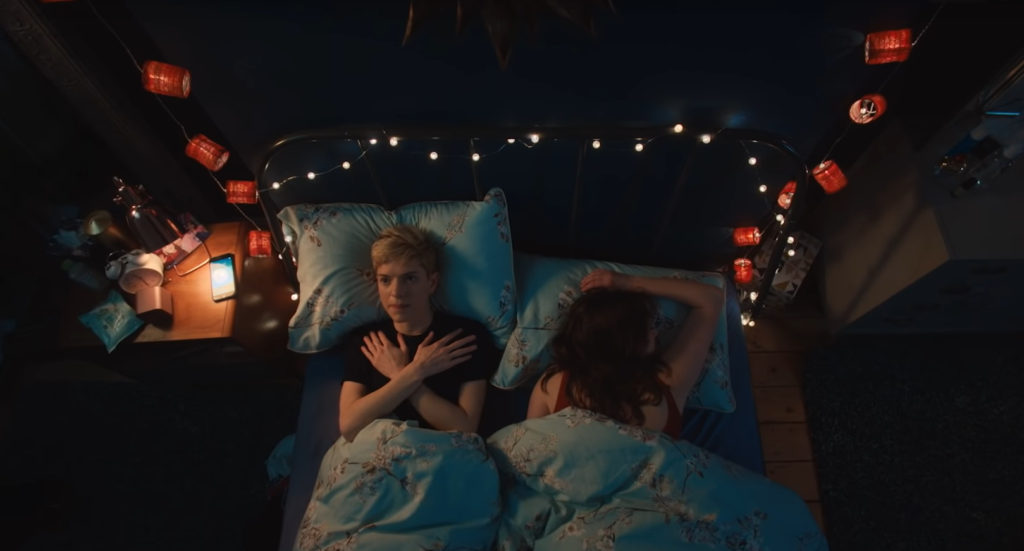 After presenting to us Mae and George’s individual struggles in the first episode, ‘Feel Good’ turned the spotlight towards Mae in the second. In the third chapter of the story, our attention is turned towards George, who had been distracting herself as well as Mae from her own problem by continuously stressing on Mae’s addiction. Now, she finds herself in a situation where she has to make a decision. Either she tells her friends about Mae or continues being in an imaginary relationship with Jonathan Crenshaw.

While attending an NA meeting, Mae gets a text from George which makes her run to her school in a hurry. Once there, George hides her in a cupboard when another teacher shows up in the class. Their conversation reveals to Mae that George hasn’t told her colleague about her being in a relationship, let alone being in it with a girl. She leaves dejected, for which George tries to make up later. It comes to their attention that Mae can’t come, which leads George to explore other options to spice up their sex life while Mae tries to understand the underlying reason.

She realises that her lack of excitement on the sexual front is because George continues to keep their relationship a secret. To make up for this, George takes Mae with her to Binky’s party, but still can’t tell the truth to anyone. Mae storms out and at Maggie’s place, she discovers that her little chat with Lava got her to reconcile with her mother. George gets drunk and ends up at the hospital.

George might have easily given in to her attraction towards Mae when they first met, but she is still too closeted to invest completely in the relationship. She has compartmentalised the two parts of her life. In one, she tries to keep Mae at bay whenever she mentions meeting with her friends. And in the other, she lies to her friends about being with a certain Mr Crenshaw. She is happy to keep both these lives apart from each other, but when it begins to affect her love life, she has to make a difficult decision.

Through George, ‘Feel Good’ focuses on the influence of society and the culture that we grow up in and how it makes us uncomfortable in our own skin. It makes us insecure about our sexuality, and even if there are people who have loved us our whole lives and have been there for us, we fear that they might not accept us as is if we tell them that we are a bit different than they imagined.

More than the world’s refusal to accept George, it is about her own inhibitions to accept herself. The reason that she doesn’t want to come out of the closet is that she fears humiliation. She fears that she will be laughed at and her reputation with her friends and family will not be the same. She also struggles to come out because she has never had someone that she could trust enough to talk about herself. Moreover, she has seen how her friends and family talk about homosexuality. If she tells them that she is gay, she fears that she might become the talk of the town.

Of course, George is not to blame, not completely, in all of this. Mae is right to want more from George, but George has been a part of the society that has loved her for long that she fears they will hate her when she tells them she is not straight.