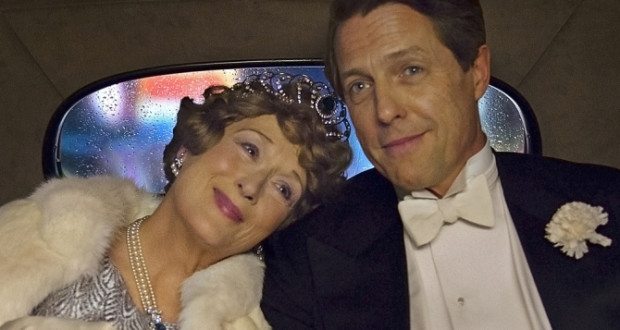 By now there is nothing Meryl Streep has not done well on screen, and there is likely nothing she cannot do. She is that rarity among actors, wholly gifted, with the innate ability to just do anything brilliantly, and she has spent the last forty years giving us her finest work on the screen. The winner of three Academy Awards, six awards from the New York Film Critics Circle, the most Academy Award nominations of any actor living or dead, Streep is an icon the likes of which we have not seen before, and we will not see again. The greatest acting is all about truth, and I have yet to see Streep give a performance that was not truthful. In fact I daresay she might be incapable of doing so.

She is wonderful in ‘Florence Foster Jenkins’, portraying a talentless opera singer in turn of the 20th century New York, protected by nay sayers by her agent and husband (who sleeps with another woman), and when the critic crucify her she becomes something of a cult hero after fighting depression. Jenkins was a very real person, quite the character apparently, a wealthy socialite who fancied herself a great opera singer, but in fact who possessed no pitch nor tone, no rhythm, brutal pronunciation of words, and though she loved to be onstage, she had no skill at all.

Her husband, St. Clair Bayfield (Hugh Grant) was himself a woeful actor, but at least seemed aware of his own shortcomings! That he protected his wife from the attacks that would come later, display a love for her, though they had a most unusual marriage as he openly had a mistress and spent his nights with her. Jenkins relied on him for support in the moral sense, and to pretty much agree with everything she said and compliment her atrocious singing.

Here is where Streep soars, because we know she can sing. She knocked it out of the park in Mamma Mia (2006), a stupid movie, but which allows her to display her pipes, and of course she sang that great tune at the end of Postcards from the Edge (1990). Here she sings badly, which is hard for a good singer to do, yet she does as always pull it off flawlessly.The look of bliss on her face as she screeches and assassinates the words of the song she is attempting is ironic because she honestly does know she is terrible. Like the terrible filmmaker Ed Wood (1994) she has great ambition, just no talent. None.

It is a light, breezy performance for Streep, yet make no mistake she fills the character with depth and humanity. Can you imagine loving something so much, believing you are gifted and then discovering you are anything but? The pain that must have caused this poor woman cannot be imagined. The actress captures that with dignity, and allows us in to feel her pain. Another Oscar nomination is likely.

Hugh Grant is an actor who I don’t hold in very high regard. He tries too hard to be witty and urbane, just tries too hard, Only once have I liked him and that was in Notting Hill (1999) his romance with Julia Roberts that was lovely. Here he is quite good, middle age suiting him, taking him to a deeper place as an actor. No longer a British pretty boy who can get by on his wry smile and good looks he must create a character here and does just that.

Stephen Frears, a fine director, gives us a lovely recreation of the period, but realizes this is a showcase for Streep, and is wise enough to turn her loose. I suspect the best kind of direction for the actress is “OK Meryl…go” and off she goes.