We’ve already seen an iteration of Girls Trip this year – just a month ago, in fact. The Scarlett Johansson-led Rough Night followed a group of long-time gal pals, who reunited for a bachelorette party and crazy, R-rated shenanigans ensued.

While it’s inevitable that Girls Trip will be compared to Rough Night, there are some major differences. Director Malcolm D. Lee’s film is pretty consistently funny, even when hitting the occasional lull in its two-hour runtime, and features a quartet of characters that are hilarious, fully realized and extremely brash in equal measures (some more than others – more on that in a bit).

The tried-and-true tropes and character archetypes are there at the beginning of the movie. Four friends, who were inseparable throughout college and known as “the Flossy Posse,” went their own ways and haven’t seen each other for some time, decide to reunite for a trip to New Orleans. Ryan (Regina Hall) is a successful lifestyle guru, who is giving the keynote speech at Essence Fest in NOLA, brings along the rest of the posse: doctor Lisa (Jada Pinkett Smith), gossip blogger Sasha (Queen Latifah) and loose canon Dina (Tiffany Haddish). 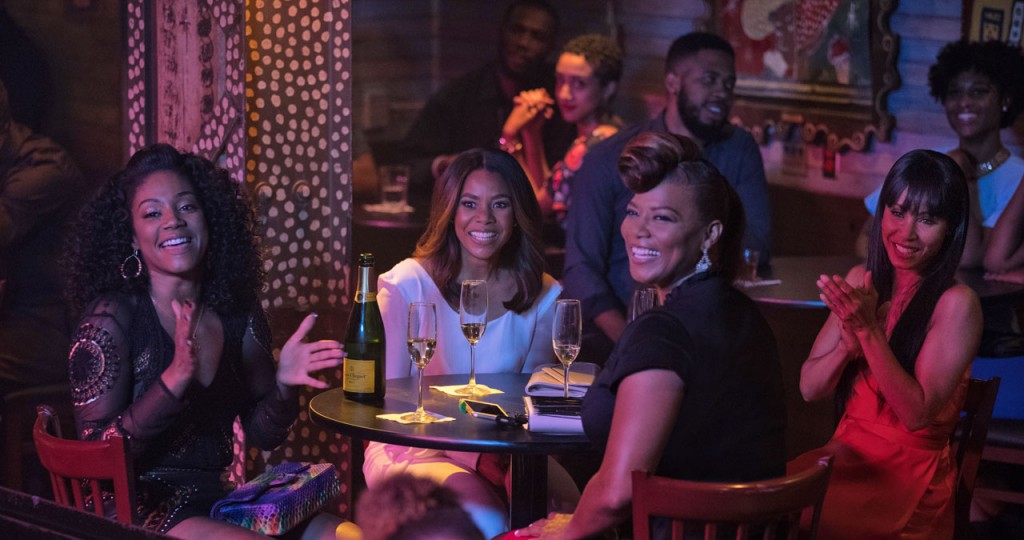 All of the friends haven’t seen each other in five years but bring a great deal of excitement and memories along on the trip and some expected baggage that has gone unspoken. Once they get to New Orleans, they are really focused on having a good time, drinking and just enjoying each other’s company. As you could expect with a movie like Girls Trip, outlandish scenarios arise, eliciting shock and laughter in equal doses.

Every beat Girls Trip takes has been lifted from a movie you’ve seen a million times but Lee’s cast and the script by Kenya Barris and Tracy Oliver bring a fresh jolt of energy to the movie. Unlike Rough Night, we spend two hours with real people, who have been written as characters rather than an assigned trait. Hall, Latifah and Pinkett Smith all get moments to shine, earn laughs and their serious moments.

In a major breakout role, Haddish steals every scene she is in as the hot-tempered and all around aggressive Dina. There are scenes where I was laughing harder than I have in a movie in some time because of Haddish’s fireball energy, which explodes in every line she delivers. She’s manic, over-the-top and never afraid to be real with her friends, telling them what they need to hear even when it could hurt their feelings. Haddish has a lengthy list of television credits and a few movies but Girls Trip gives her a chance for all of us to notice her.

Girls Trip is further proof you can be a nasty, vulgar, hard R-rated comedy, while being substantive. Thanks in large part to the cast; Girls Trip is the best comedy of 2017, so far.