Review: ‘My Blind Brother’ is Good Until It Abandons its Edge 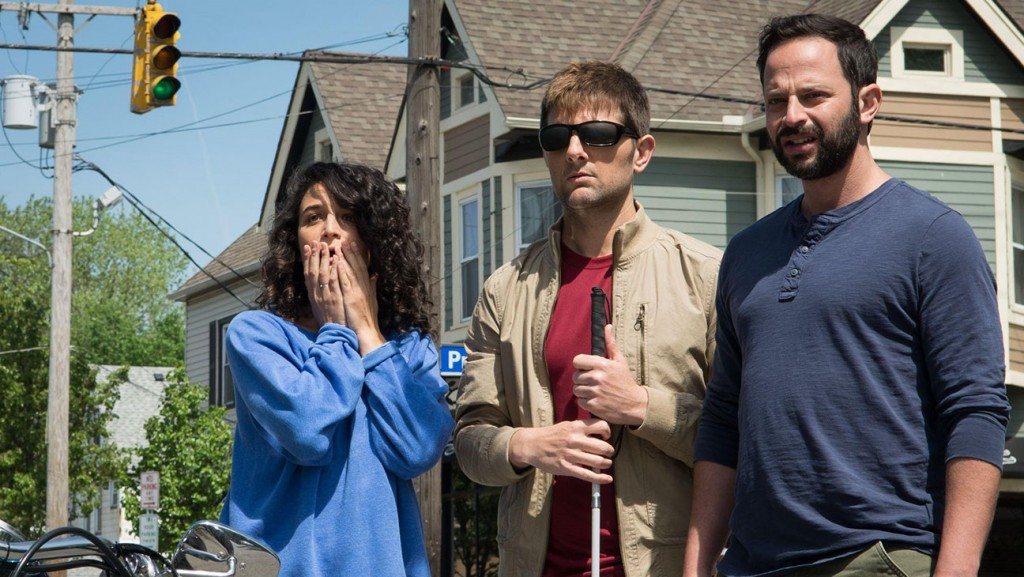 Bill (Nick Kroll) witnessed an accident that left his brother, Robbie (Adam Scott), blind. Ever since the accident, Bill has been by his brother’s side, helping guide him through life. Doesn’t that sound sweet?

It does but it’s not. Bill doesn’t want to be helping Robbie but feels obligated to because he saw his accident happen. Bill is much happier lying on the couch, watching TV or going to bars and doesn’t really want to spend the time or effort helping Robbie. To be honest, who could blame him? Robbie can be insufferable, expecting everyone to bow down to all of his achievements.

None of the characters in My Blind Brother are overtly awful or malicious but rarely are they likeable. One night out drinking, Bill meets Rose (Jenny Slate), who is still dealing with a lot of guilt she has surrounding the death of her boyfriend. The two have fun drinking together, which results in a one-night stand. Bill would like to see more of Rose but she can’t leave his house the next morning any quicker.

Robbie decides his next big endeavor will be to swim across a lake to raise money for charity. He enlists the help of someone else to guide him through the process and wants Bill to meet her. Turns out the person is Rose and a love triangle forms.

Bill has often lived in the shadows of Robbie’s accomplishments after his accident and there is often a constant and unspoken competition between the two of them. Rose just ends up being the next battle between the two brothers and neither of them knows how it will end. Rose and Bill share a connection but she feels guilty dumping Robbie for his brother. So much of what the characters in My Blind Brother do are fueled by guilt. These people rarely feel anything genuine.

This gives writer-director Sophie Goodheart’s film an edge and a rampant wickedness that runs through most of the film. (This is her first feature, which is a longer version of her short). Even when the characters are intolerable, it’s interesting to have a romantic comedy that dares to be a little mean. The film ultimately abandons it edge when it predictably moves into a sweeter tone, which even as expected as that is, really is a let down.

Kroll and Scott, who have worked together before and developed a rapport, have a believable chemistry as dueling brothers. Kroll gets the less showy role but his character is much more interesting as he is constantly living in a world where people only want to talk about his brother. Scott is all-in as Robbie but the character becomes grating after a while.

My Blind Brother is forgettable but mostly enjoyable film. If anything, Parks and Recreation fans (such as me!) will enjoy seeing Scott, Kroll and Slate have a little mini-reunion for 85 minutes.