Review: One-Way to Tomorrow is a Feel-Good Romance Drama 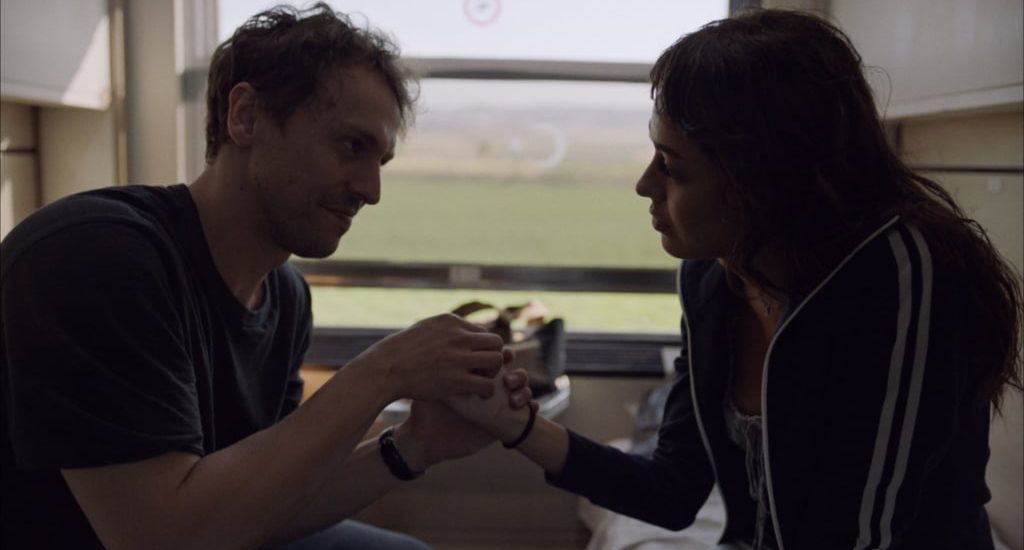 With a prolonged spell of silence, ‘One Way to Tomorrow’ introduces two strangers who are aboard a train leading them to a known destination but an unknown future. One thing leads to another and an awkward conversation sparks between the two. But what starts off as an interesting conversation between two intentionally flawed characters soon turns into a mirror that makes you reminisce about your own desires, fears, insecurities, and most of all, relationships.

Two strangers, Ali and Leyla, end up in the same carriage of a train heading from Ankara to Izmir. Their ten-hour journey starts off on a negative note where Ali tries to be friendly with Leyla, but she ignores him. After a heated start, Ali manages to convince her that he’s well-intentioned. Although Leyla still seems a little hot-tempered, she starts to show some interest in Ali when he tells her that he’s traveling to Urla to attend a wedding. During these moments, when Ali tries to find out more about her, she hastily changes the topic and gets back to questioning Ali about the wedding he’s going to attend.

Ali, who was quite open about his private life from beginning itself, pours out all of his secrets to Leyla. He tells her that his ex-girlfriend is about to get married in Urla and he’s only going there with the intention of getting her back. But as dreamy as Ali initially seems, it takes Leyla a few seconds to give him a major reality check and make him question his intentions.

One Way to Tomorrow Review

Throughout its runtime, ‘One Way to Tomorrow’ drops crafty motifs that divide its narrative into eight different parts. Each of these parts not only marks a milestone in the relationship of the two characters but also shows how they’re together growing out of their toxic pasts. Primarily driven by the dialogues of its characters, it elevates its simplistic plot with the performances of its strong cast. Furthermore, the filmmakers of the movie seemingly adopt a quasi-documentary style of filming with several shots being depicted from the perspective of a third invisible character. This approach almost makes you feel like you’re actually watching the two characters from a distance.

Midway through its runtime, just when ‘One Way to Tomorrow’ starts to lose itself in the conversations of its characters, it drops an unforeseeable twist. This twist binds the lives of the two characters and also gives its storyline a new direction. Up till this point, the film’s pace feels painfully slow. But with its subtle little twist, the emotional rapport between its two characters begins to escalate and starts striding towards something much deeper. Even so, despite having all the right ingredients to be a memorable romance drama, ‘One Way to Tomorrow’ falls short of what you expect from it.

When watched in swift succession, all of its parts coupled together make-up for a promising bittersweet ending. However, considering how it struggles to keep you interested in the beginning, I’m sure that most viewers will find it hard to get past its mid-runtime mark. In all of its pitfalls, there’s one brief scene that totally blows you away, both thematically and visually. In this scene, the two characters step out of the confinements of the train, and for once, find themselves in the world outside. The female character, Leyla, who was previously holding herself back, completely pours out everything that she feels. And moments after, when they head back to the train, she shuts herself off again as if nothing ever happened. The breathtaking countryside hilly backdrop of this scene makes it even more enchanting.

Overall, ‘One Way to Tomorrow’ makes good use of its budgetary constraints by fully utilizing its limited setup. There are also moments in the film where the chemistry between its two leads almost feels magical mostly because of its well-written dialogues. Even so, the low-key conversations of its characters are not able to elevate it above other conventional offerings of the romance genre. One can still appreciate it as a feel-good romantic interlude.