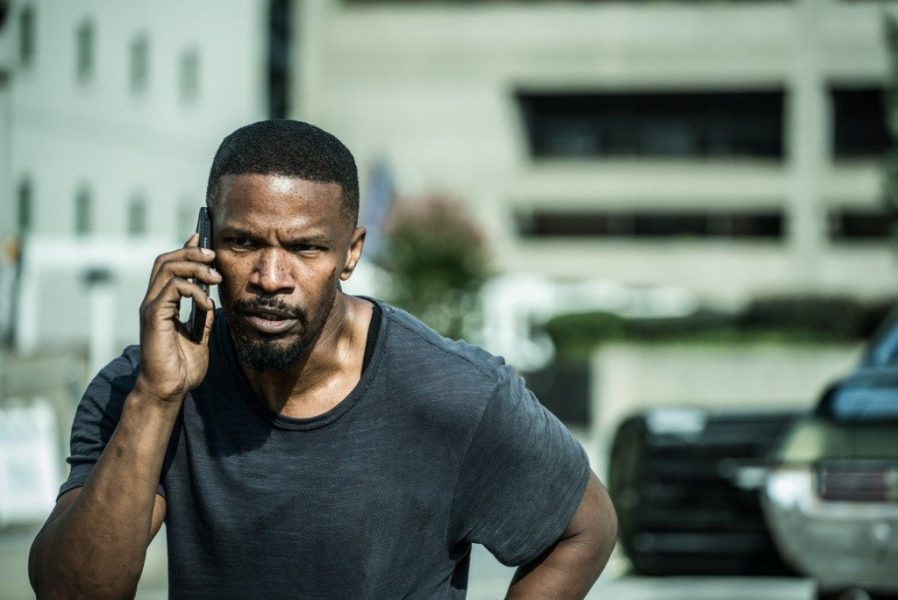 If anything constructive came from watching the new Jamie Foxx thriller, ‘Sleepless,’ it’s that I learned about the French film ‘Sleepless Nights,’ which I need to seek out and see. Apparently it’s much better than it’s American remake. Who knew?

The sort-of English remake is the kind of disposable movie going offered to the masses come any given January, a notorious month for lousy films and wasteland multiplexes. Everyone is busy seeing the movies that are collecting all the trophies, so studios dump the movies they have no hope for into cinemas after the first of the year.

Director Baran bo Odar’s ‘Sleepless’ is utterly defenseless against its bad reviews but all I can offer is an apathetic shrug. It’s not exactly a ringing endorsement but for 96 minutes my brain was off and I just absorbed the outlandishness of every frame of this big, dumb action spectacle.

Foxx plays Vincent, who is rushing away from a drug heist with his partner (T.I.), having just stolen 24 kilos of cocaine and left two dead bodies behind. But surprise, surprise, Vincent and his partner-in-crime really are partners on the Nevada police force and they have just messed with the wrong drug dealers.

One afternoon, Vincent is spending some rare quality time with his son, Thomas (Octavius J. Johnson), and a couple of masked guys rip Thomas from the car and take him away. Vincent finds out he has stolen drugs that belonged to casino owner Stanley Rubino (Dermot Mulroney, trying so hard to be slimy and menacing with his goatee, slicked back hair and orange tan), who really needs to get the cocaine back to his boss (Scoot McNairy).

The majority of ‘Sleepless’ takes place in a casino as Vincent tries to get his son back from the bad guys, while evading a fellow officer, Jennifer Bryant (Michelle Monaghan), who is desperate to expose Vincent as a dirty cop. To make Vincent’s night even more stressful, his ex-wife Dena (Gabrielle Union) keeps calling him to check on Thomas.

‘Sleepless’ hits all of the beats you would expect of a dirty cop genre picture, never surprising but always watchable. As the leading man, Foxx doesn’t do much of interest, mostly growling as he hobbles around the casino, frantically trying to find his son (oh, he’s bleeding through this entire movie due to a stab wound from the carjacking that cost him his son).

If you’re itching for a mindless shoot-em-up action film, where Foxx drives a car through a casino, you’re in luck because ‘Sleepless’ will be your perfect night at the movies.