Review: The Players is an Entertaining Adultery Comedy 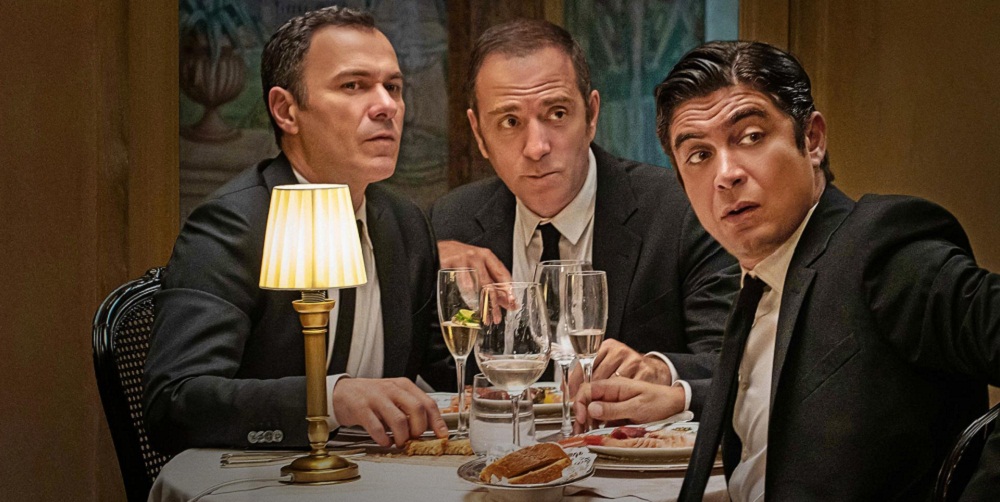 ‘The Players’ (Gli Infedeli) is a simple character-driven sketch comedy that never aspires to step into serious waters. And even during its brief moments of seriousness, it never drags its depiction of racy extramarital affairs. Although easily forgettable, there sure is something about its nooky jokes, occasionally hilarious punchlines, and its team of charismatic actors. To many, its continental depiction of sex and marriage may seem a little over-the-top or simply unappealing. Even so, it’s quite appreciable that even with its portrayal of unapologetically sexist characters, it never seems misogynistic in any way.

The first short of the movie is quite simple. It just centers around a couple who are traveling to the Maldives for a holiday. But for some reason, the wife suspects her husband of adultery. She feels anxious, paranoid, and keeps a close eye on her man almost all the time. When given the opportunity, she checks his phone and finds things that she should never have known. Second short of ‘The Players’ centers around a husband and wife who confess that they’ve been cheating on one another. However, instead of questioning their marriage, they simply call things even and move on.

The next short in line is all about a frustrated married man who attends an official party in the hope that he’ll get “lucky” before the sun goes down. He relentlessly hits on all the women from his office, but unfortunately for him, nothing works out. But even after being rejected by almost everyone, he just can’t stop being who he is—a cheating husband who is willing to do just anything to get laid. The fourth short of the film takes a look at an old couple who seem to be happily married for years now. However, the husband is up to no good. He sneaks out of his home almost every weekend, pretending that he’s going to watch a game of basketball. But, instead, he visits sex workers and cheats on his wife. When his wife figures out his little secret, she plots the perfect revenge.

The penultimate short shows the extent to which a man is willing to go just to gaslight his wife. When his wife figures out that he’s cheating on her, he devises the perfect plan to make her believe that she has lost her mind. It does work in his favor, but karma comes biting back at him. The film ends with a 10-minute short that revolves around the misadventures of three friends who get lost in their “man talk” but little do they realize that they’re about to make a big fool out of themselves.

Not every standalone short of ‘The Players’ is as funny as the others. Even so, it has its share undeniably hilarious and witty moments that eventually make it worthwhile. I believe the shorts of the movie are intentionally ranked in such a way that they just get better with time. The prelude short seems very generic in context with its story, and I would be exaggerating if I called it amusing in any way. It is bereft of laughs. But at the same time, it sets your expectations so low that you’re later quite blown away by its overall rollicking tone.

For the most part, the credit for the film’s effective comedy goes to its two leading stars, Riccardo Scamarcio and Valerio Mastandrea. The actors keep reappearing in every short, switching up between different personas, hairstyles, and even sexual preferences. With each role, they bring a kind of unique charisma that makes you forget about their roles in previous shorts and immerses you into their present character. For instance, there’s one short where Riccardo Scamarcio plays the role of a typical sexist loser who fails to impress any woman at his workplace. Contrasting this, in almost every other short, he plays the role of ladies’ man, who gets everything he wants. In both of these diverging roles, the actor’s performance seems believable.

Out of all the shorts featured in the film, I’d say the fifth one is the most memorable. Although a little exaggerated, it has the longest runtime, which allows it to develop its characters a little more than the others. It also adopts a very twisty storyline which keeps you on edge throughout. Not to mention, even its underlying tone and message seem clear. Overall, the tales of unfaithfulness in ‘The Players’ are, at best, quite enjoyable. Moreover, the film only tries to give its viewers a modern perspective of relationships. It neither preaches about what’s morally right nor does it pass judgment.