Review: The Quarry is Made Better by the Lead Performances 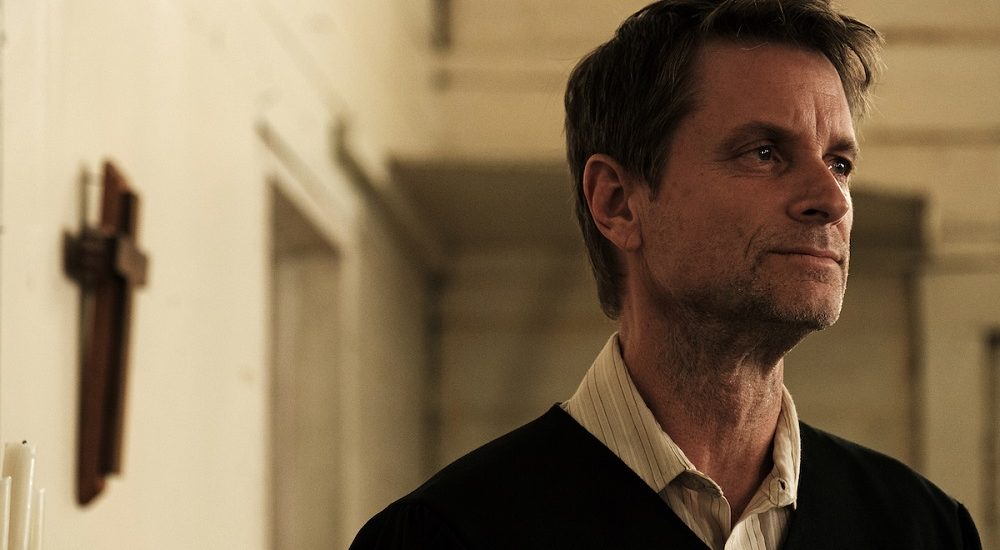 How far do you have to run to leave your past behind? How corrupt do you have to be not to let anything affect your conscience? We are defined by the choices we make, especially the ones in the aftermath of something terrible. ‘The Quarry’ follows the story of a man who struggles to come to terms with his actions. He doesn’t want to get caught for the crimes he has committed, but his conscience won’t let him sleep soundly.

The town of Bevel welcomes their new priest, David Martin. He has the responsibility of the church, which doesn’t have much of an audience anymore. However, his sermons change everything. The congregation expands, and people realize that this priest is unlike any they have ever had before. What they don’t know is the priest is an impostor.

In reality, he is a murderer who is on the run from the law and took the opportunity to have a new life with a new identity. However, when a dead body is discovered in a nearby quarry, trouble begins. On the outside, the priest has to maintain the façade of being a man of God, an upstanding citizen. On the inside, however, he is plagued by the conscience that nags at him to confess.

Though pitched as a crime thriller, ‘The Quarry’ is not really it. The story is pretty straightforward; it comes clean with the audience quite early and pretty quickly. You know the crime, and you know who did it. What the film focuses on is how much do you think you actually know the Man?

Instead of relying on the usual tropes of the crime genre, this film takes a laid-back approach. There is no cat-and-mouse chase; there is no superficial thrill. Instead, there is an undercurrent of the themes that resound intensely with the viewers. It is about human emotions, the conscience, and one man’s struggle to keep his guilt at bay if he wishes to survive. Instead of a whodunit, we get a character-driven drama that centers on the protagonist fighting his inner demons.

Shea Whigham plays the role of the man who remains unnamed throughout the film. He takes over the identity of the priest whom he had killed on the way to the town where he hopes to have his fresh start. The actor, whose impressive filmography speaks volumes for his talent, succeeds in catching the pulse of the character that demands a range of emotions from him.

From killing a man in a fit to finding hope in helping the congregation, the Man’s emotional dilemma demanded Whigham to display these sentiments through actions rather than words. He doesn’t need to go into a lengthy monologue to tell the audience how he feels at the moment. His sullen expressions, dull eyes, and hopeless gait are enough to bring you in sync with his emotions.

In contrast with this, when the Man has something that makes him hope for the future that is not tainted with the sins of his past, the hint of a gleam in his eyes and a smile does the job. A similar intensity is found in the performance of Michael Shannon. He shifts from certainty to confusion, wondering whether to trust his instincts or accept what is in front of him.

Keeping the cast scant, the film entirely focuses on the characters and their arcs. While the actors do a commendable job, there are times when the story feels somewhat hollow. The tug-of-war for the Man’s conscience, sometimes, loses hold of the situation, and just like the town, some scenes feel empty. The melancholic score in the background tries to fill up this space. It even adds to the foreboding of the events, in harmony with the flow of the story. But there are times when the seams become visible, and you wish these parts had been handled better.

Apart from its theme of crime, punishment, and forgiveness, the film also sheds light on the prejudice against people of color. It plays a vital role in shaping the story, directing it towards its end, but the audience might not feel the message reverberate with the same intensity as they might have witnessed in other films before.

‘The Quarry’ delivers a stirring experience. It demands the price of redemption and focuses more on the forgiveness of self than seeking it outside. It is about the journey that one needs to undertake on the inside. As the Chief says, guilt is a heavy burden. Not every man can carry it.