Review: ‘Valerian and the City of a Thousand Planets’ is Messy and Over-imaginative

Think of every fantasy and science fiction film you have ever seen. I mean ever! Take bits and pieces from each, throw it all together, toss it up on the screen and you have Luc Bessons’ new film Valerian. You can easily spot elements of Star Wars (1977), The Lord of the Rings (2001-02-03), Game of Thrones, Logan’s Run (1976), Besson’s The Fifth Element (1997), even as far back as Things to Come (1940) you will find it here in ‘Valerian and the City of a Thousand Planets’. It seems like the creator sat down and created every possible type of alien character ever and tosses them into the film.

Years ago, while watching my daughters and her friends at a sleepover, I watched them mix at least nine sodas together and down it, foreshadowing college drinking games. I sense a Besson did just that with this busy, always in motion movie.

My best analogy for this horrible film is eating a meal, the food is poisoned, hits the stomach acid and is vomited back up as this is vomited onto the screen. Easily among the worst films I have seen this year.

Luc Besson has given us some great films, Leon: The Professional (1994) and The Fifth Element (1997) two of the best films of the last thirty years. Each is dazzling in its originality, brimming with superb performances, and contains some of the most remarkable images in cinema.

After ‘Valerian..’, I left the cinema numb. I doubt I ever will see the film again (God forbid). I doubt I will ever think about it again. There are times the screen is filled with so much wonder you can hardly believe what you are seeing, but then it comes crashing down to earth, usually the moment anyone speaks. The effects are mind-boggling, truly, but there are so many of them happening at once it becomes tedious. 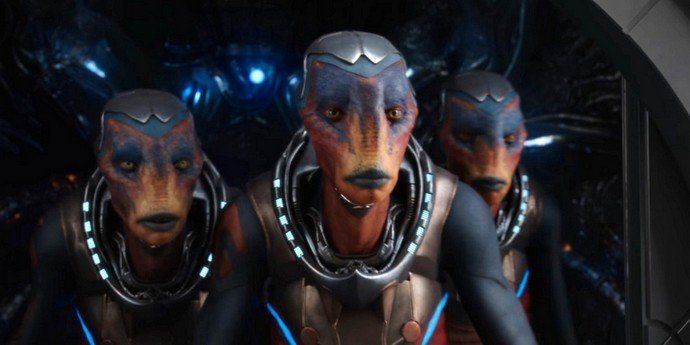 It feels like Besson opened his skull and imagination and everything he had ever thought of made it to the screen.
It should not have!

The human eye and ear can take in just so much, and there is way too much activity, movement and noise going on to be able to focus on anything. And then to add to the chaos, not a single actor has the strength or talent to stand out, but then again they have no characters written for them, and we do not care for them one iota.

Understand I am numb after seeing this, numbed by sensory over load meaning way too much going on folks, and none of it make any sense.

It took a long time for me just to figure out Valerian was a character! Dane DeHane, said to be a major new talent, is dull as dull can be as the so-called hero of the film. Having portrayed James Dean a couple of years ago, he seems to have decided to portray every character as though he was Dean himself, mumbling his way through each sentence. It is a dreadful performance from an actor who takes himself way too seriously. DeHane should take some lessons from his co-star Cara Delevingne, who is the best thing in the film as his partner of sorts, lighting up where there is in the film with her presence.

Clive Owen shows up as the bad guy, but way too late in the film to spark any interest, by the time he comes into the film we are bored, finished and done with the picture. Not even scene stealer Ethan Hawke can make a difference.
The movie is at the end not fun, not interesting, simply a huge mess of a movie that should never have been made. They should take the reels, put them in a vault somewhere and let them rot so that all traces of this film is gone forever.