Review: ‘War For the Planet of the Apes’ is the Best Movie of the Year (So Far)

‘War For the Planet of the Apes’, directed sublimely by Matt Reeves, the finale in the new Apes series is the best film I have seen this year. Yes I just said that, and I mean it. Will the Academy finally figure out a way to honour Andy Serkis? The gifted actor created Gollum in The Lord of the Rings Trilogy through motion capture, Kong in King Kong for Peter Jackson and Caesar in the Apes films. With computer sensors attached to his body, his movement and facial expressions are fed through the computer program that allows the artist to crest the hyper realistic character for the screen. Those characters each have great humanity, but not without Serkis.

The ape leader Caesar is growing old, his hair grey, his eyes brimming with intelligence. He has grown tired of the fighting between the few humans left. The Apes live peacefully in the dense forests, but again man — this time led by a Kurtz like commander well played by wild eyed Woody Harrelson — come looking to destroy the Apes and their leader. 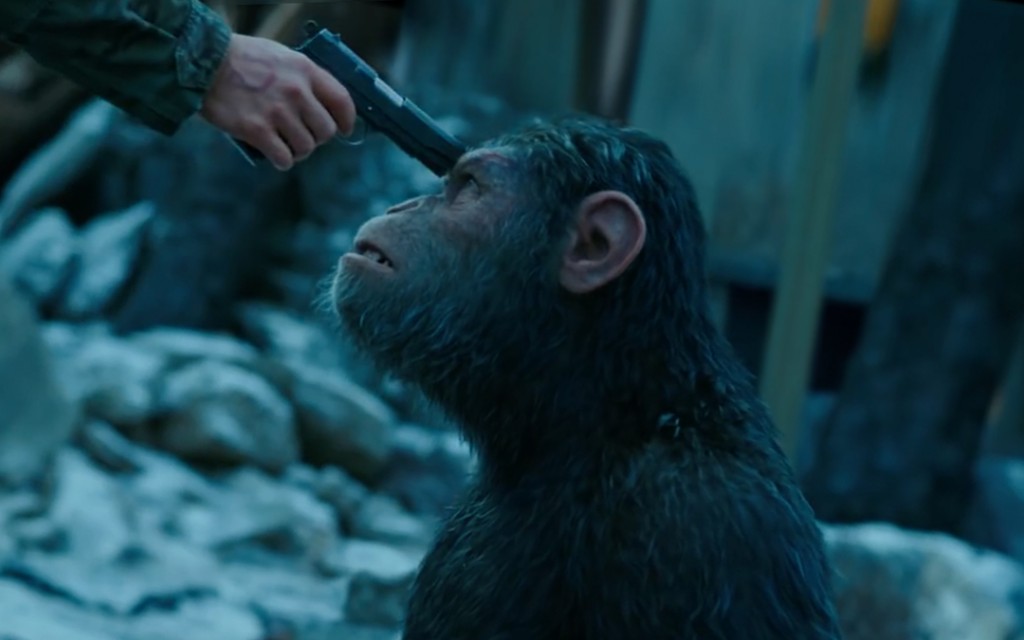 Caesar has avoided war for many years but when one close to hm is killed, his anger peaks and he cannot contain himself. We understand he bears no hatred for mankind by the way he looks at the mute child Nova, taken in by the Apes, but he does loathe the Commander. Caesar does not understand this form of hatred, man is the only creature who kills because he can, and the brilliant ape does not comprehend that. For all his intellect he lacks the darkest aspect of humanity, which is not a bad thing.

While seeking a new place in the forest for his growing colony of Apes, Caesar comes across a camp where apes are enslaved, just short of a concentration camp, run by the dangerous commander (Harrelson). He has Apes in the camp, as slaves denying them food and water, all part of his master plan.

Fueled by a devastating personal loss and what is right for his village of simians, Caesar fights back, but we can sense the weight of conflict on him throughout the film. He is weary, until energized by a tragedy.

Serkis is magnificent in the film as Caesar, bringing as he did in the previous a sense of what Daniel Day-Lewis gave us in Lincoln (2012). As the leader of his people he has great responsibility on his shoulders, yet he too is free, and when does he get to enjoy that? There is love in Caesar, we see it for his family, but also for Nova, the stunningly beautiful mute child taken in by the Apes. That love, is what makes him more humane than the humans in the film.

Matt Reeves, who directed the previous film, once again guides the story with great confidence.

The film looks beautiful, the lush green forests with towering trees represents a kind of paradise for the apes. In a sense it is a reversal of Apocalypse Now (1979) with the Kurtz like colonel played by Woody Harrelson seeking out Caesar so humans, nearly extinct, can regain a foothold. Harrelson, as always is brilliant, and the story is not one sided, we see his side of it all. Where he goes off the rails is in his absolute disregard for the Apes well being, he sees them as animals and they have advanced far beyond that. Caesar is more humane, decent and fair than the colonel. He has the qualities we hope all people have, but do not.