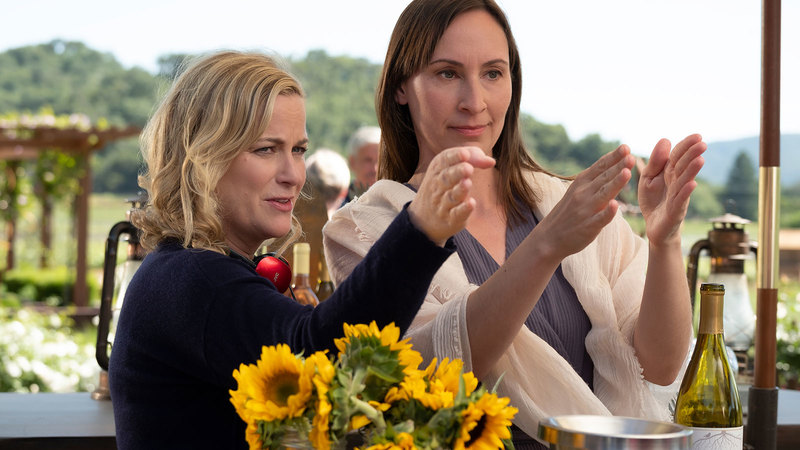 Netflix has had some great collaborations with SNL graduates. Be it Tina Fey’s ‘Unbreakable Kimmy Schmidt’, an absolute joy of a show that tackles with some serious themes, or Amy Poehler’s ‘Russian Doll’, another comedy that has grave issues at heart. It only seemed logical that if Poehler was to make her directorial debut, it should be for Netflix. Inspired by the true experience of the actresses’ getaway, the film tells the story of six best friends who spend a weekend together at Napa. Drinking heaps of wine while bonding with each other, what could possibly go wrong for them? 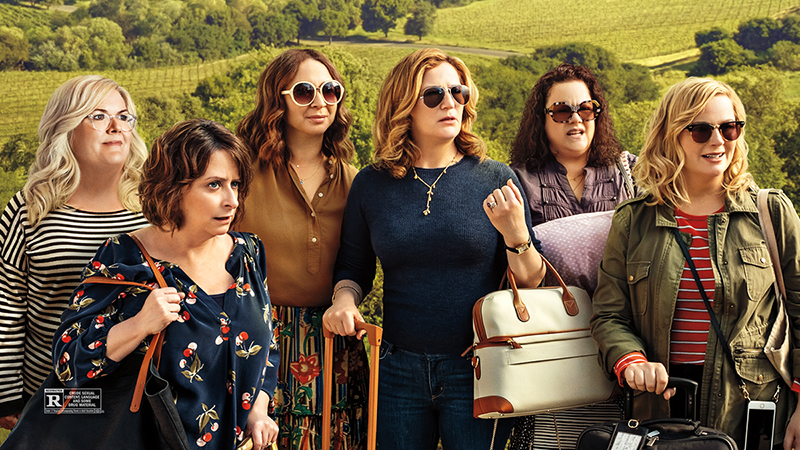 ‘Wine Country’ follows the story of six middle-aged friends who plan a weekend getaway in order to celebrate “the big 5-oh!” of one of them. They haven’t had such a get together since one of them in the group got married, which is what makes this trip all the more special. They plan to drink wine and reconnect, or at least, that’s what the owner of the villa they have rented suggests them to do. Abby (Amy Poehler) has taken it upon herself to chalk out an itinerary for them. She has planned everything down to the minute and wishes the group the stick to it if they want to have maximum fun. This displays Abby’s need to exert control, which seems rather amplified in this particular weekend.

Then there is Naomi (Maya Rudolph), one of the chilled-out people who doesn’t want anyone on their phones because that’s not what they are here for. But then, her efforts to keep herself away from her own phone indicate something troublesome in her life. Next is Catherine (Ana Gasteyer), a workaholic who is, evidently, the most successful of them all. However, her too much indulgence with the phone segregates her from the rest of the group. Val (Paula Pell) is legit cool and just wants to find someone she can connect with over the weekend. She does find such a person, Jade (Maya Erskine). However, the age gap between them might become a problem.

Jenny (Emily Spivey) rarely attends any gatherings, which makes Abby book only five rooms, just in case. She somehow brought herself to be here this time, but here anxieties haven’t left her alone. And then there is Rebecca (Rachel Dratch), the birthday girl who insists that age is just a number. But too much insistence on her part tells everyone that she has denial problems, especially about her husband, Brian, whom no one likes.

The Good and The Bad 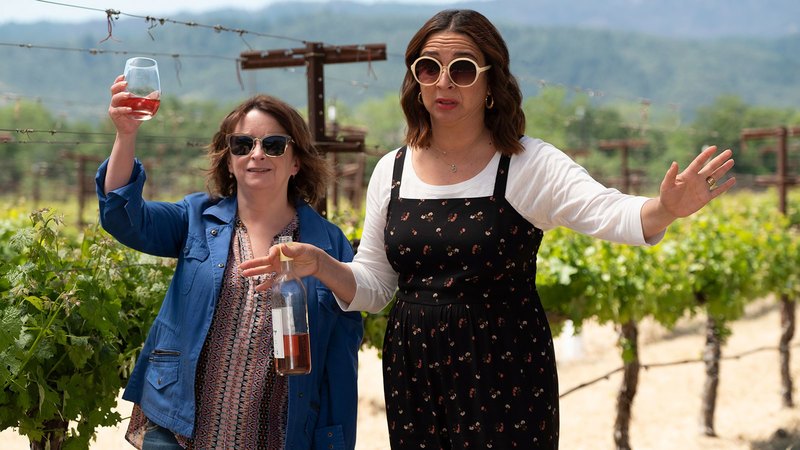 Since almost the whole cast of ‘Wine Country’ consists of SNL veterans, one goes in expecting great writing, riotous comedy, undercurrents about one subject or the other, and excellent acting. There is excellent acting, 100% per cent. The rest, however, I am not so sure about.

Starting with the good things, ‘Wine Country’ takes a step away from the otherwise clichéd storytelling of buddy comedies. The genre has become a bit stale now, always being about young people on a sojourn to form connections while drinking, partying and whatnot! For once, the story puts another demographic in the lead and presents an opportunity for the audience to understand their struggles, especially with the mid-life crisis, and even tries to repaint the picture of the otherwise stereotyped image of women in this age group. This allows the story to take a turn away from the mandatory hook-ups and heartbreaks scenario. There are no young and “too beautiful to be true” women storming the city with all they have got.

‘Wine Country’ is more grounded and hence, seems truer. What is the life of a 50-year-old like, you ask? They have back pains, they have a whole bunch of things to which they can say “the things we say now”, and they wonder what mixing MDMA and their meds would do to them! The difference between the millennials and them is also highlighted through their experience with Val’s love interest, Jade. It is things like these the audience can relate to, which makes the film successful on many fronts. But is that enough to counter the bad things?

One of the better things about ‘Wine Country’ is the bang on chemistry of its cast. However, even that couldn’t save it from becoming bland more often than not. Starting with the treatment of the characters, this was to be a story about six friends, but only four, at most, got that spotlight. While some shine, others are mostly in the background. Even Tammy has more exposure in the story than Jenny. A bit more balance for everyone would have served the story better.

The next disappointment comes from the lousiness of the dialogues. Maybe it’s just because we had so high expectations, especially considering that Poehler has recently delivered ‘Russian Doll’, one of the best Netflix shows of the year. There were moments where some punches landed really well, the ending especially, where the physical comedy took over. But for the most part, it seemed rather lacklustre. There were spurts of laughter, but they were too far and too few. It would have been easier to overlook this lack of comedy had the other half been more powerful. The part where the ladies show their vulnerable sides, where some serious discussions take over. But even in those moments, you wish there was a bit more depth. 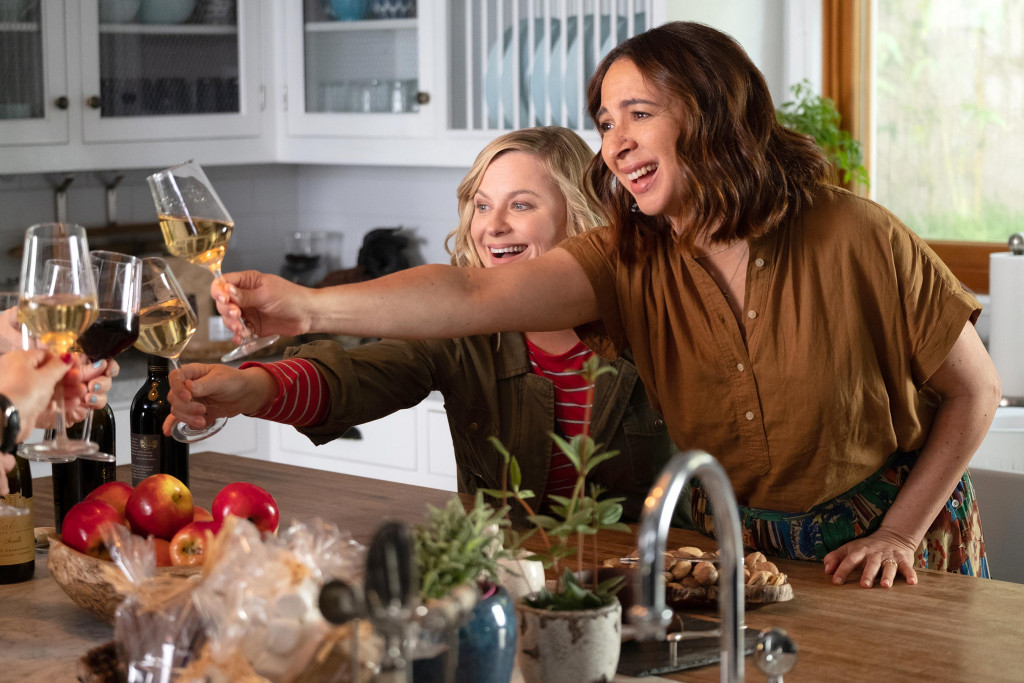 ‘Wine Country’ is a bag of mixed feelings. I am not the one to compartmentalize the audience according to the genre, but it will mostly appeal to people who are in the middle of their mid-life crisis themselves. There are some things that youngsters just can’t relate to! But even they can enjoy the film, wondering if they can have the same life in their friendship as the ladies have in the film. It is definitely “squad goals”. Weighing all the good and the bad in the film, I think that it could have been better. The idea was certainly fresh and the execution could have used a bit more sharpness. All in all, something was lacking in ‘Wine Country’. Be it the laughter that it certainly could have used more, or the flair that seemed to dampen with every scene, this film failed to achieve the balance of its comedy and seriousness.