Who is the Richest Cast Member of The Real Housewives of Dallas? 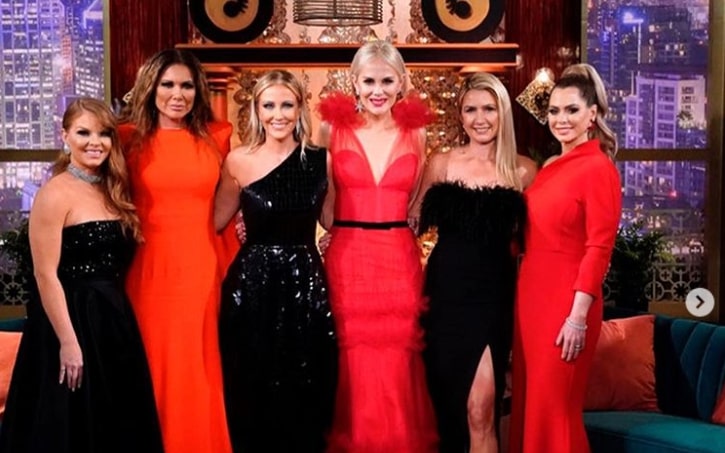 Bravo’s popular reality show ‘The Real Housewives of Dallas’ is the ninth spin-off of the franchise. Having debuted in 2016, it has released four seasons till now. Giving us a glimpse of what it is like to live as a wealthy housewife in the Texan city, the show has gained a wide base of fans who binge-watch the series as their guilty pleasure. Envious yet fascinated by these women’s dramatic and luxurious lifestyles, followers often wonder how rich these housewives actually are. Well, now you have the answer!

Kary is yet another housewife who married a rich man. She was born in Mexico and came to the US when she was 16 years old. The feisty Mexican-American woman lives in the same posh neighborhood as Kameron and D’Andra. She was introduced to her co-stars in season 4. Her husband is a successful businessman, and that inspired her to bud as an entrepreneur too. After her fame from RHOD, she recently launched her own jewelry line called Kamo by Kary. She has also appeared on shows like ‘Celebrity Page’ and ‘Below Deck Mediterranean’. She currently lives in a mansion worth $5 million. As of 2020, Kary Brittingham’s net worth is close to $1.5 million.

#friday #feelings 🍄 .. Anyone else keep sing 🎶 Waiting for the world to change 🎶 .. @beaubumpas 📸 @vip.artist 💄 @thecandytopia 🏨

The short-tempered RHOD cast member, LeeAnne, was a model who competed for the title of Miss USA in 1989 and made it to the top 10. She appeared in various TV commercials and shows like ‘Big Rich Texas’, ‘Miss Congeniality’, ‘Home Improvement’, ‘GCB’, and ‘Chase’. She had moved to Los Angeles for a while due to her modeling and acting career. Furthermore, she has anchored and played host for various reality shows. She recently launched her own clothing line called Infinity Dress, which sells garments that can be worn in different ways. LeeAnne is very proactive in the charity circuit. She is involved with many volunteer organizations and NGOs. She is currently married to her long-term partner, who is a former law enforcement officer. As of 2020, LeeAnne Locken’s net worth is close to $2.5 million.

I’m moving into spring fashion with @luxieclub If you haven’t heard of Luxie, it’s a must!!! Personal shopping, monthly sales for the looks, handbags that you just have to have. Luxie will take care of you and find what your looking for. Sharing with you my Prada they found for spring. I love it, love Luxie and so will You!!!!

Brandi, who has an on-and-off friendship with most of her co-stars, has managed to earn some big bucks through her television fame. Famous for being an All-Star and a five-time cheerleader for NFL team Dallas Cowboys, she shot to fame with RHOD. She has even worked closely with the government in the past under contractual roles and also mentored cheerleaders at various institutes. She was also crowned Miss Austin Teen, and the former spokesmodel was featured on the cover of Varsity Magazine. Her appearance on the likes of ‘Entertainment Tonight’ and ‘Celebrity Page’ only helped her gain more popularity. Supporting many local and national NGOs, she married her high-school sweetheart, who runs a million-dollar business himself. As of 2020, Brandi Redmond’s net worth is close to $4 million.

Last night I had so much fun playing dress up with the kids in the photo booth area 🥰👑 I also had a great time with my @idontgivearippodcast cohosts @mommadeesimmons @amyvanderoef @idgrtommy at the Rock the Runway: An Evening in Marfa event for @kiddskids presented by @kiddnation here in Dallas! The night was filled with laughs, love, and a beautiful message to appreciate what you have in life and never take anything for granted 💕 The kids at the event truly touched my heart. I’m so happy that I was able to experience such a warm, grateful and heartfelt evening. I’m so excited to see all of the pictures from the 2020 trip to @waltdisneyworld as these kids deserve the WORLD 🌎🌈❤️ Cheers to giving back and appreciating life one day at a time! XO #RHOD #HNGM #UltimateLiving #IDontGiveARipPodcast #BravoTV #BossBabe #Charity #Dallas #Marfa #MarfaTexas #KiddsKidds #DisneyWorld #Grateful

The only child born to millionaire parents, D’Andra, already comes from a wealthy family. A businesswoman and socialite, she studied nutrition in college. She had always been inspired by her entrepreneurial, confident, and outspoken mother, who started a business related to nutritional supplements. D’Andra had been working with the Department of Energy in Washington DC when she came back to Texas to take over her mother’s business. Having inherited her mother’s power and business acumen, D’Andra has been a receiver of many awards that she achieved through her work. She is currently married to a famous photojournalist. As of 2020, D’Andra Simmons’s net worth is estimated to be $4 million.

Always look on the PINK side of life 💗🌸💕 Today is #InternationalPinkDay, and YES… I am celebrating!!! It’s more than just a color, International Pink Day is a day against bullying, discrimination, homophobia, biphobia, transphobia, and cyber bullying. The #DayOfPink is to show the world we won’t tolerate harassment or discrimination! Pink is also the symbolic color for the fight against breast cancer! Yes, I have always LOVED the color, but it truly is #MoreThanPINK to me, and there is a deeper meaning to being a #pinkaholic! We are girly, silly, loud, crazy about PINK… but we are also fighters, and LOVE relentlessly. Be yourself, be bright, be strong, be MORE THAN PINK 💓 #rhod

Even though Kameron lives in the poshest neighborhood of Dallas, that lifestyle cannot be fully credited to her hard work or reality TV fame. Kameron originally hails from California. She married her college boyfriend, Court Westcott, who belongs to one of the most prestigious, wealthiest, and well-known families of Texas. Court, too, is a businessman and venture capitalist. He had helped Kameron get her business off the ground. A popular socialite, she had worked as a dog clothing designer and launched an organic dog food line. She became famous through RHOD and got involved with various local volunteer organizations and charities. As of 2020, Kameron Westcott’s net worth is estimated to be $4.5 million.

Whenever you don’t understand what’s happening in your life, just close your eyes, take a deep breath and say… “God, I know this is your plan. Just help me through it.” I know I don’t understand or know all of your struggles, but know that you are in my thoughts and prayers daily. I am sending you love tonight ❤️

Stephanie, the richest housewife of Dallas, was born in Oklahoma and raised in a humble home. After pursuing a degree in Psychology, she started working as a social worker. She also modeled for fashion labels all over the States and Europe. She shot for the likes of LA Fitness and Planet Fitness. She soon caught the eye of Travis Hollman, a big fish in the world of business, and they got married. She moved to Dallas and continued her charity work. She has two sons and was supposedly a fan of The Real Housewives Franchise when a friend recommended her to the producers. An Instagram celebrity and influencer, her reality TV fame also helped her earn through appearances on ‘Entertainment Tonight’, ‘Hollywood Today Live’, ‘Home & Family’, and many more. One of the richest housewives of Dallas, she also runs her own fashion blog. As of 2020, Stephanie Hollman’s net worth is estimated to be $18 million.