When Does Rick and Morty Season 4 Episode 5 Air on Adult Swim? 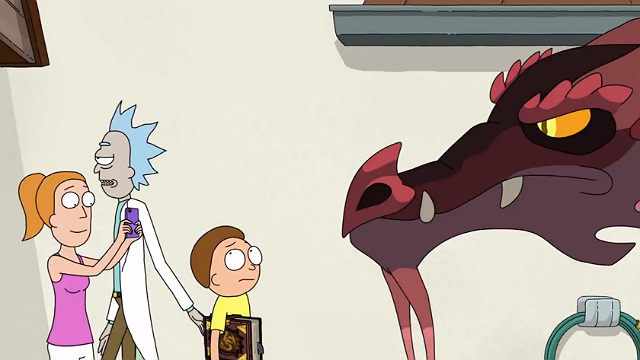 ‘Rick and Morty‘ is a show quite unlike any other. We get generous doses of nihilism, cynicism, and existentialism in the series, which centers around the adventures of Rick Sanchez, who is accompanied by his grandson, Morty. Morty serves as a sort of moral compass to Rick, who is extremely Machiavellian and disregards most of the societal structures. However, the rest of the family, including Rick’s daughter, that is, Morty’s mother, is pretty normal. Morty’s father struggles with his marriage and Rick’s influence on the family, while Summer, Morty’s sister, is concerned with her social standing.

Over the seasons the show has amazed us, giving us fodder for thought, while not holding back on the laughs. Naturally, you might be wondering about the latest episode of the show, but before we recap Episode 4 for you, let us walk you through where and when you can see the fifth episode of ‘Rick and Morty’.

Rick and Morty Season 4 Episode 5 Release Date: When Will it Premiere?

For now, what you need to know is that Episode 5 is slated to air on December 15, 2019, at 11:30 p.m. ET on Adult Swim. The official synopsis of the episode reads, “Lots of things in space broh. Snakes and sharp stuff.”

Where to Watch Rick and Morty Season 4 Episode 5 Online?

In case you are wondering about where you are going to watch the latest episode of ‘Rick and Morty’, we have got you covered. Since it is an Adult Swim show, you can check it out on the channel. If you cannot get to a television, or do not have a cable connection, you can watch it on the app or website as well. Since Adult Swim has been known to organize some free streams for reputed shows like ‘Rick and Morty’, you can catch them if you are in luck.

Alternately, you can use the platforms which offer cable-free live streaming. These options include Hulu with Live TV, FuboTV, Sling TV, AT&T TV Now, and YouTube TV. Since many of these services offer free trial periods, you could avail of the opportunities. However, you must remember to cancel the subscription once the trial period is up. While this covers most of the options, you could refer to our more comprehensive and detailed guide to where to watch ‘Rick and Morty’ here.

The new episode has been titled ‘Claw and Hoarder: Special Ricktim’s Morty’. It involves dragons, wizards, and a talking cat. The episode starts with Morty escaping after having broken into a prison to retrieve an item for Rick because Morty had been promised a dragon for his work. Initially, Rick is unwilling to live up to his end of the deal but ends up relenting and ordering a dragon for Morty. A wizard delivers the dragon with instructions.

Meanwhile, Morty’s father discovers a talking cat, who convinces him to take it to Florida. As the two have some beach fun, Morty has a swell time with the dragon, but it irritates Rick. However, a confrontation with the dragon goes differently than was expected, and Rick begins to develop a liking for the dragon. The two even ‘soulbond’, which is a merging of the souls, and looks sexual. Morty is disgusted by it and tears up the contract. The wizard reappears and begins beating the dragon, calling it a slut.

Upon returning home, the dragon is asked to leave since Morty is disgusted by the sexual nature of ‘soulbonding’. Both Rick and Jerry are highly disturbed after reading the mind of the talking cat and erase their memories at the end of the episode.