After hearing another story of Rick, the man-with-a-mustache gets pissed off and meets a girl. The girl recounts how she entered the train and how a woman who dated Rick told her a story about him. Then, it is revealed that the man-with-a-mustache is Rick, and the girl is Morty. They both take their original forms. Moreover, the train is an “anthology:’ a figurative device.

Then, the ticket checker (TC) appears and starts attacking Rick and Morty. Rick kills the ticket checker by blowing a hole in one of the windows, which sucks the TC out. Then, the TC “wakes up,” and it is revealed that he was in a simulation at an arcade. He begins to question reality, but the top half of his body starts floating in the air. 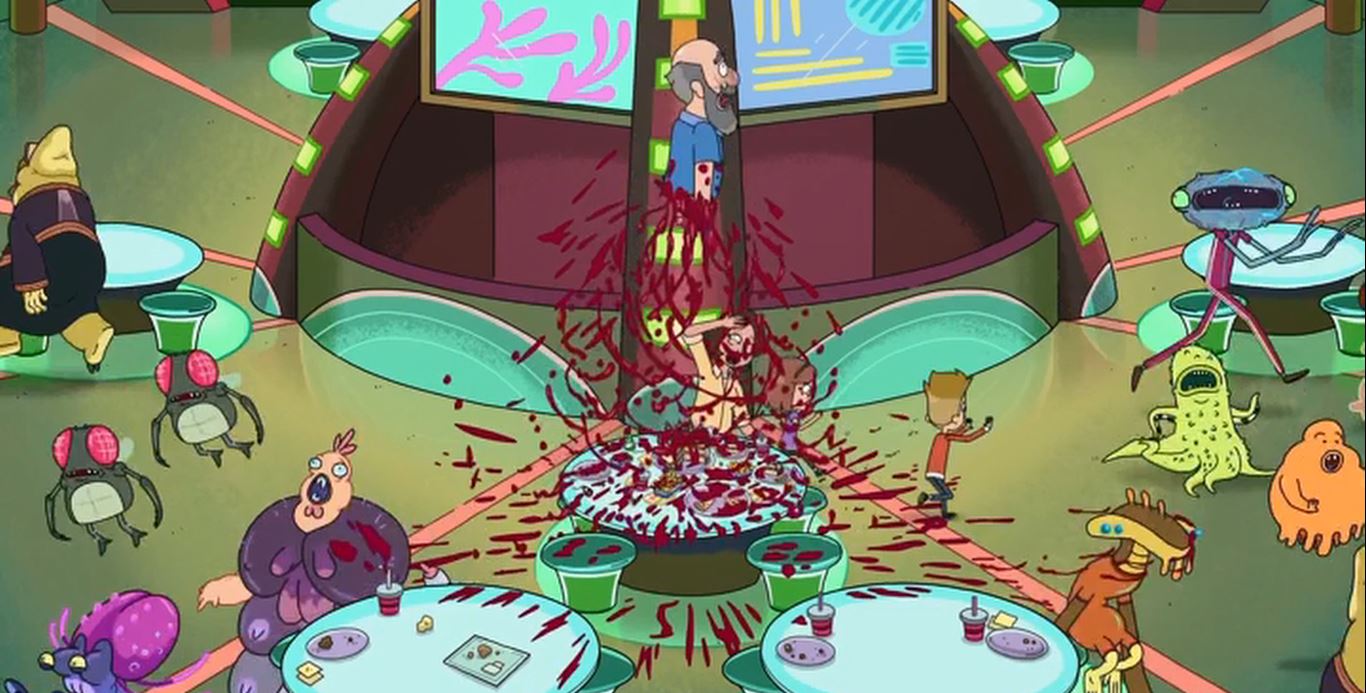 Rick and Morty appear and attack all the officers. Then, they make a complicated plan based on the structure of the train. Then, the scene switches to Rick dancing with Bird Person. Then, the scene changes back to the arcade. It is revealed that the TC has become a legend. A couple of aliens are shown smoking a bong and discussing how the “floaty body man” is real. The two then proceed to discuss various theories regarding his existence.

Back to the train, Rick and Morty are on top of the train. Rick asks Morty to narrate a story that is unrelated to them. After Morty narrates an awful story, Rick asks him if he knows about the Bechdel test. Rick’s oxygen from his suit starts to run out (the train is seemingly in space), and Morty begins to narrate a story about two women who talk about things that do not involve men (Bechdel test). Morty narrates a story about his mother and Summer, which ends with the two shooting scorpions using lasers from their vagina.

Back in the train, Rick and Morty meet the Storylord. The Storylord starts attacking Rick and Morty, and with each punch, the two “remember” another story. For instance, Morty wakes up, escapes a vat, and dodges multiple Ricks (0:45 in the trailer attached above).

Then, Rick wakes up at home and sees Morty playing with a model train. Morty tells Rick that he bought the train from the gift shop of the Citadel of Ricks. Rick tells Morty that his only purpose is to consume. The model train derails, and Rick re-emphasizes how Morty should consume and buy another train. Then, in a post-credits scene, Rick and Morty are seen in a promotional video spoof of the model train.

Similar to the first episode of the fourth season of ‘Rick and Morty,‘ the sixth episode marks the beginning of a group of episodes with the writers shedding off fan theories and expectations. In fact, this episode manages to do that in a more outlandish and meta manner. There is at least one meta-comment every thirty seconds as the episode prepares viewers for the rest of the fourth season.

The episode not only highlights the brilliance of the writers but also of the show’s marketing campaign. Most of the scenes in the trailer, which led to elaborate fan theories, were shown in this episode itself, throwing these theories and expectations out of the story-train window. By doing so, ‘Rick and Morty’ urges its viewers to be satisfied by the mere act of consumption. Hence, viewers might not get to see an Evil Morty storyline or even some form of continuity. The continuity tank exploded, remember? But, the show’s writers firmly put their foot on the ground to tell fans that the cosmic confusion of the show is here to stay. That is its appeal, and the writers are not bowing down to fan expectations any time soon.

Basically, the episode is a long and meta ride to convince viewers to stop deconstructing. The writers are always going to stay one step ahead, and fans just need to accept that. The execution is no less of a genius act than the conceptualization of the story train. The episode is effortlessly funny, like a scene in the episode when Rick and Morty discuss how they can still derive humor by making things more simple and straightforward.

The number of references in the episode is practically uncountable. First of all, the train, apart from symbolizing storytelling, also seems to be inspired from Bong Joon-Ho’s ‘Snowpiercer.’ For instance, the face-off with the Storylord in the last compartment seems to be reminiscent of Wilford in Bong Joon-Ho’s film. Apart from that, there is also a mocking reference to capitalism, which is the central theme of ‘Snowpiercer.’ Apart from that, the episode also mocks religion and the Bechdel test in a glorious fashion. Our verdict: the episode is one of the most Ricktastic ones of the series.