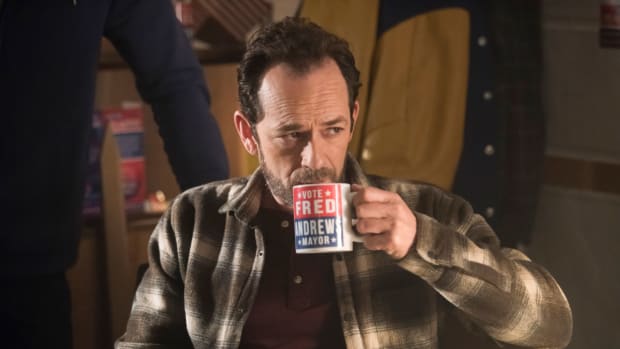 The CW show ‘Riverdale‘ resumed filming from March 6, Wednesday, after suspending production on March 4, Monday, after Luke Perry passed away due to complications that arose from a massive stroke. Deadline reported that the show had gone dark for two days, as the cast and crew mourned the demise of Perry, who played the role of Fred Andrews on the show.

To give you a little backstory, ‘Riverdale’ is based on the Archie comics and Perry played the role of the father to the protagonist Archie Andrews, portrayed by KJ Apa. Understandably, Perry was well liked on set and has been on the minds of the cast and crew as they returned to film the show without him. Warner Bros. Television, The CW and the executive producers of ‘Riverdale’ including Greg Berlanti, Sarah Schechter, Jon Goldwater, and Roberto Aguirre-Sacasa released a statement about Perry’s passing away, saying, “We are deeply saddened to learn today about the passing of Luke Perry. A beloved member of the Riverdale, Warner Bros. and CW family, Luke was everything you would hope he would be: an incredibly caring, consummate professional with a giant heart, and a true friend to all. A father figure and mentor to the show’s young cast, Luke was incredibly generous, and he infused the set with love and kindness. Our thoughts are with Luke’s family during this most difficult time”. Aguirre-Sacasa had also written separately about Perry, “Going through pictures on my way to set. Our heart, always. Tonight’s episode of #Riverdale finds Fred doing what he does best–helping Archie”.

The show makers also assured that all remaining episodes of ‘Riverdale’ would be dedicated to Perry and included a touching tribute to the first episode that aired after his death with an In Memoriam note. Stars KJ Apa, who plays Archie, and Camila Mendes, who plays Veronica Lodge, Archie’s ex-girlfriend, both took time to express their grief over Perry’s death. Apa who was closest to Perry on-screen, sharing a father-son relationship, posted the song ‘The Background’ by the Third Eye Blind. The lyrics read, “Everything is quiet, since you’re not around, and I live in the numbness now, in the background”. Camila too shared a touching message, saying, “He took care of us all. An authentic man who took pleasure in offering us his guidance and wisdom. His presence was healing; he had the ability to make you feel comfortable and at ease within seconds of seeing him. I will never forget the collective shock and distress we experienced when the news broke on set. We lost a dear friend. My heart hurts for his family and anybody who had the pleasure of knowing him. Rest in peace, Luke. Although you’re no longer around to wrap me in the warmth of your hug, I can still remember what it felt like. Whenever I think of you, I will remember that feeling”.

In the meanwhile, the show’s writers have already started tweaking the scripts for the remaining Season 3 episodes after Perry’s passing. However, it is unclear how they plan to handle this loss. While Perry will be seen in the remaining ‘Riverdale’ episodes that had been shot before his death, his last appearance will be in Quentin Tarantino‘s film, ‘Once Upon a Time in Hollywood‘, that is scheduled to hit theaters on July 26, 2019.