When Does Robot Chicken Season 10 Premiere on Adult Swim? 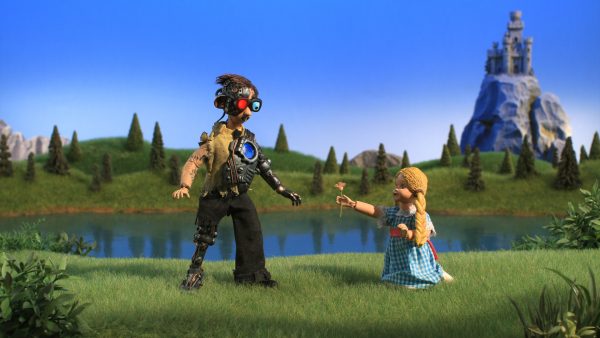 Robot Chicken Cast: Who is in it?

Most of the characters in ‘Robot Chicken’ are voiced by creators Seth Green and Matthew Senreich. Actor, voice artist, producer, writer, and director Green is best known for his appearances on ‘Radio Days’, ‘My Stepmother Is an Alien’, The ‘Austin Powers’ franchise, ‘The Italian Job‘, ‘Scooby-Doo 2: Monsters Unleashed’, and ‘Guardians of the Galaxy‘, among others. He is also recognized as the voiceover artist for Chris Griffin on ‘Family Guy‘.

Meanwhile, Senreich is a notable screenwriter, tv producer, and director. Joining the duo as guest voiceover artists is a rotating panel of numerous actors — which changes from season to season. For example, in one of the episodes from 2007’s installment, there was an episode dedicated to ‘Star Wars‘ that featured the voices of Star Wars leads such as George Lucas, Mark Hamill, Billy Dee Williams, and Ahmed Best.

Green and Senreich are expected to be back for season 10.

Robot Chicken Plot: What is it about?

Inspired by the ‘Twisted ToyFare Theater’, which is a funny photo comic-strip that appears in ToyFare: The Toy Magazine, the name for ‘Robot Chicken’ is based on a certain dish served in a Chinese restaurant named, Kung Pao Bistro. Green and Senreich had once visited the eatery and after that, came up with the title of the series.

The concept of ‘Robot Chicken’ is primarily about mocking pop culture while taking references from trending films, toys, shows, and beliefs. It adopts a similar trope to that of famous comedy sketch shows such as ‘Saturday Night Live’. In order to tell the stories, it uses stop motion animation of toys, action figures, claymation, and multiple other objects such as tongue depressors, The Game of Life pegs, and popsicle sticks.

One very interesting idea that is frequently depicted on the show is about a scenario when fantasy entities would find themselves in a real-life situation. For instance, on one sketch, Stretch Armstrong loses his powers because of his advanced age. As a result, he needs a corn syrup transplant. On another episode, we witness Optimus Prime performing a prostate cancer PSA on humans. Again, there is this incident when Godzilla faces problems in the bedroom.

Originally, ‘Robot Chicken’ opened with a sequence, where a deranged scientist discovers a chicken killed on the road. He brings it back to his laboratory, wanting to transform it into a cyborg. His experiment proves successful and the chicken opens its laser eyes, pointing toward the title appears ‘Robot Chicken’. The scientist then forces the chicken to watch multiple tv screens that finally converge to the main subject of the show. On the 100th episode, Robot Chicken ends up killing its creator when the latter confiscates its girlfriend Cluckerella.

From season 6 onwards, we see a role reversal in the opening sequence — with the chicken actually discovering the decapitated body of the scientist and not vice verse. He plans on taking revenge by converting this dead human to a robotic cyborg. As a result, from the sixth installment onwards, the scientist’s laser eye points to the title.

From season 8, we witness the current opening sequence where Robot Chicken is found frozen on a block of ice. It is taken to a futuristic lab by another scientist, who is a descendant of the former mad scientist. He brings out the chicken from its frozen state and re-animates it. The rest of the events are similar, with the chicken being compelled to watch a wall of projected images with multiple shows while being strapped to a chair and its eyes being held open through calipers. This fresh opening was implemented since, in the finale of season 7, the mad scientist’s son rips out his father’s eye to open a biometric-operated door to create a gang of half-cyborg animals. This posse creates havoc and ends up kidnapping all the five Presidents of the US, including Jimmy Carter, George H.W. Bush, Bill Clinton, George W. Bush, and Barack Obama. Our reanimated Robot Chicken and the new Mad Scientist form a team and join hands to rescue the abducted politicians.

It will be interesting to see what new adventure does Robot Chicken goes on in season 10.

Robot Chicken Season 10 Release Date: When does it premiere?

You can check out the official trailer of ‘Robot Chicken’ season 10 below. If you wish to catch up on all the previous episodes from the series, you can head to show’s official website.