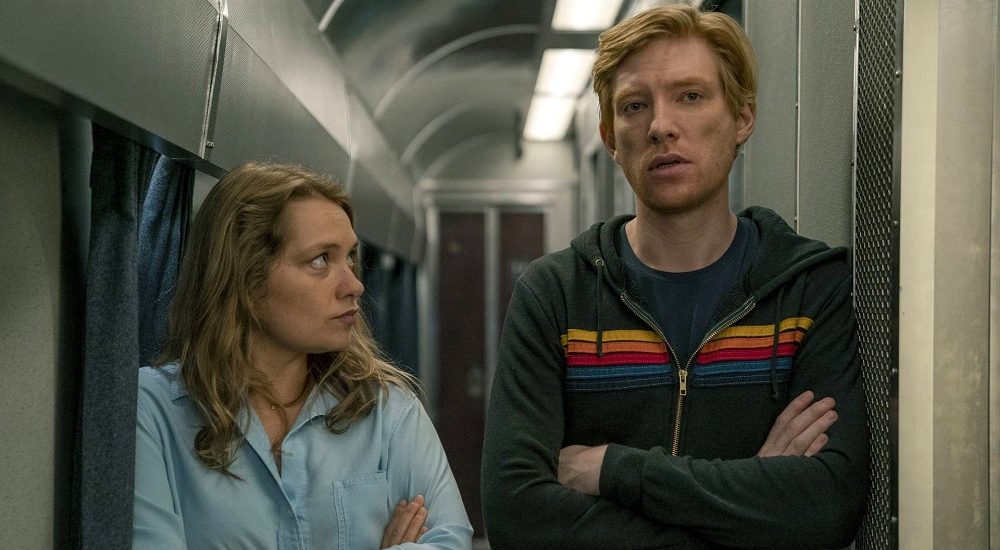 ‘Run’ had started with Ruby. We found her sitting in the parking lot waiting for nothing to happen, and then, something happens. We can tell a lot about her from the way she talks and fidgets and tries to hide things from Billy. Her backstory is not a difficult one to deduce. She is caught up in just another cycle that a lot of people might find themselves in. What we can’t put the finger on is what’s going on with Billy? We did get some hints about his career and what might have happened, but the way his side of the story has been shrouded, it looks like he might have had a better reason to run. What did you do, Billy?

Billy is in his room, hammered, just as he had told Ruby. He is also crying but, most importantly, hiding. He texts “RUN”, but before he can wait for the reply, a call startles him. It is Fiona, and she is bringing over some people. Billy tries to stop her, but when “RUN” comes back, he leaves all his cares behind and heads for New York.

Back on the train, Billy is still shaken by the fact that Ruby left behind her husband and children to honor their pact. Ruby, oblivious of what he knows, thinks that he is not interested in her anymore because of her body. They fuss around a bit in the roomette, but another call distracts them. Ruby doesn’t want to take it, but Billy insists that she does.

In its second episode, ‘Run’ once again flaunts the incredible chemistry between its leads. Having known each other so long ago, there are a lot of things that they don’t know about each other. There are secrets between them, which the show keeps suggesting at with a here and there dialogue or behavior. However, they still know each other pretty well; well enough to know just what will chafe the other one. They are playing with each other, testing each other’s patience, while also keeping their own in check. This teasing is made more exciting by the way the actors have picked up on their characters.

This episode also gives more room to Domhnall Gleeson to tell us more about Billy. We still have little to no idea of what exactly he is running from and where Fiona fits in his story. But the obscurity of his motives has only made us surer of the fact that at this point, he has nothing to lose. Whatever he has left behind is worse than the consequences of running away bring for him. The same, however, does not hold true for Ruby.

How does a woman leave behind her husband and children for a single text from a person that she used to know? Life must have been pretty bland for her, but it still doesn’t make much sense. One of the reasons behind that is you wouldn’t expect such a thing from a woman. It would have been easier to believe had genders been swapped. A man is not held accountable for leaving behind his children as much as a woman, and perhaps, this is precisely why Vicky Jones decided to put Ruby in this situation and not Billy.

When Billy texted Ruby, he didn’t know what her life was like. He didn’t consult or plan, and now that he knows what Ruby ran away from, he is feeling guilty about it. That’s what adds more tension, and hence, more excitement to the story. She thinks he is bothered by her body and what age has done to her, but he is upset by her C-section scar, which reminds him that he has put her in a very difficult situation.

‘Run’ carefully treads the grounds of its leads’ simmering mutual attraction, serving the consequences, and keeping the mystery alive by hopping around from one genre to another. There is a balance of comedy, sexual tension, fun, hostility, and conflict in the series. We don’t know what comes next, but we are enjoying what’s in front of us, just like the characters.

The scene in the roomette where Ruby and Billy try to have sex is funny and naïve. Their banter makes it rom-com-ish, especially the part where Ruby says that she will do it with whoever comes out next from the restroom. When it is an Amtrak 10, Billy gets nervous about whether she will actually go forward with it or not. For Ruby, this is something exciting, just to prove that she can be exciting still. For Billy, however, it is a mix of emotions. He is jealous but also concerned because he knows that, for her, this would mean cheating on her husband, which he would be held accountable for. He doesn’t want to be pinned down with yet another blame.