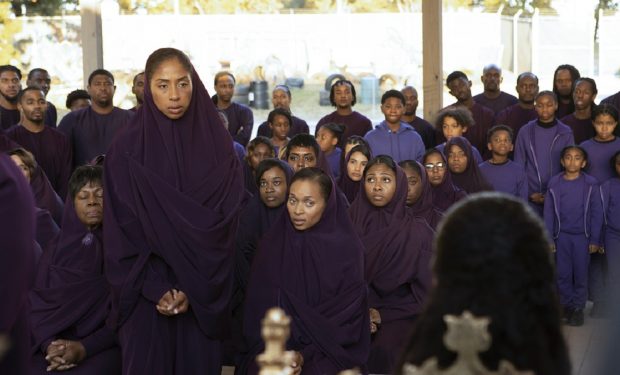 In the latest episode of ‘Tyler Perry’s Ruthless’, titled ‘The Purge’, Andrew is given a critical and difficult mission. On the other hand, The Highest brings together the Rakudushis with an impassioned speech while Joan attempts to gain Ruth and Tally’s trust. Finally, Oliver confronts Lilo about Lacey. Now, the series is all geared up to release its 20th episode. Read on to know when the next episode will hit tv screens.

Where to Watch Ruthless Episode 20 Online?

‘Ruthless’ airs new episodes every Thursday at 10 pm ET. You can catch episode 20 by tuning into BET through a cable connection. Additionally, you can stream the released episodes on the show’s official website by visiting BET.com or BET+. Live-streaming, cable-free platforms include FuboTV and Sling TV. You can also catch the episodes by subscribing to BET+ on Amazon Prime Video.

The upcoming episode is called ‘The Dark Walkers’ and here is its official synopsis as outlined by BET: “The Highest suspects that Dikhan is with someone then finds out who it may be. Lilo disrupts the status quo at the compound in several ways. Ruth plans an escape while Brian sneakily tests Lynn for drugs.”

Following its midseason premiere on November 26, 2020, ‘Ruthless’ has seen several plot developments. Ruth and Tally find out that one of the cult members is planning an escape. Dikhan is confused about his feelings for Ruth while Oliver is assigned to the recruitment segment. Again, Marva guides Lynn on a tour through the camp while Dikhan comes to know about the Rakudushi’s poor financial condition. Meanwhile, when The Highest pushes Paula to the extreme, Tally wonders what really happened to the latter. Lacey and Oliver go on a romantic outing in the woods and Sarah confronts Andrew regarding his involvement with the Rakudushis.

Later, Sarah is suspicious when she discovers Andrew’s picture with The Highest, and Ruth is disturbed when she gets to learn about Marva’s “special assignment” for some of the other women. Ruth teams up with Zane but Joan’s sudden interest in helping Tally arouses her suspicions.  Dikhan is wary of Andrew’s activities while Melinda comes up with a dangerous plan at the sheriff’s office. In the 19th episode, Andrew is tasked with a sensitive and extremely difficult mission. The Highest delivers an impassioned speech and is able to rally the Rakudushis for him. On the other hand, Joan tries to gain Ruth and Tally’s trust, and Oliver asks Lilo about Lacey.