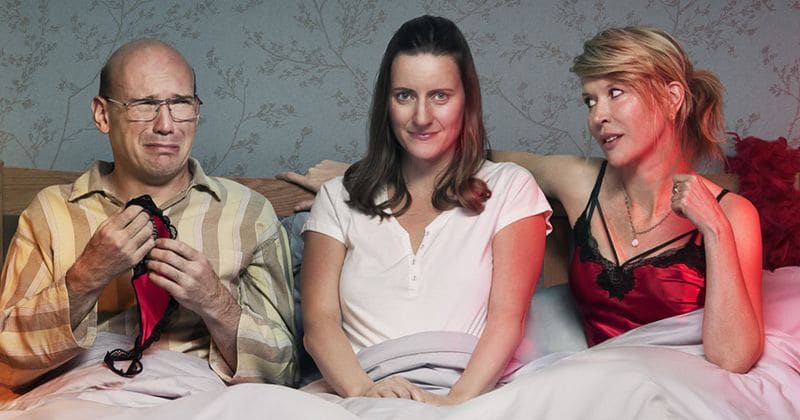 Sally4Ever is a British series that originally premiered on October 25, 2018, in the United Kingdom on Sky Atlantic and 11 November 2018 on HBO network. Hush Ho and Various Artists Ltd are the production companies of this series. This comedy series is written, created as well as directed by Julia Davis. It is executive produced by Sam Bain, Julia Davis, Philip Clarke, and Jesse Armstrong.

Sally4Ever revolves around Sally who has lived a boring life for 10 years with her fiance David. Everything changes one night when David asks her to marry him. A girl named Emma arrives who changes Sally’s life forever. They both embark on a wild love affair which soon goes out of control. There are some scenes in this series like the tampon scene, as it is being called, which some audience might find controversial.

Sally4Ever Cast: Who is in it?

The main cast members of the show are: Catherine Shepherd who plays the lead role of Sally in the series. Julia Charlotte L Davis plays stars as Emma; Julian Barratt Pettifer plays Nigel; Alexander Tulloch Macqueen plays the role of David who is Sally’s ex-husband; Felicity Jane Montagu appears as Elanor. The show also stars Steve Oram and Jane Stanness in the roles of Mick and Deborah respectively.

Sally4Ever Plot: What is it about?

Sally is a mid-level marketing executive who wants to have some fun. She is seen dating her nebbish boyfriend for a period of ten years and is living a life that can be called mundane, to say the least. One day, she encounters Emma who is a free-spirited, charismatic, impulsive and seductive boho actress and singer. Apart from singing, Emma also works as an author, poet, and musician. Sally decides to end her relationship with David and begins a whirlwind romance with Emma. She reveals to David that she is not attracted to him anymore and hasn’t been for “seven years or so” of their relationship despite still loving him. A distraught David ends up with a broken engagement and his mother’s beautiful wedding dress that he had offered to Sally to wear on their wedding day. Meanwhile, Sally and Emma’s wild affair takes the form of a deep, romantic relationship.

There are some wildly passionate sex scenes filmed between our two heroines that raised one too many eyebrows. As per a review by Guardian, the lesbian love-making between Sally and Emma may have surpassed all the greatest hits by the creator of the series. The review reads, “the zenith – or nadir – is the extended sex scene between Sally and Emma that confirms Emma’s lesbian awakening and encompasses all its creator’s greatest hits: intimacy viewed through a corrupted lens, a lingering look at bodily fluids and functions you would rather glance swiftly over, parodies of screen conventions, alongside somehow (given the unremitting physicality of the activities) a flaying of the soul.”

Sally begins to enjoy her life, but things quickly deteriorate and before she realizes it, Emma begins to claim Sally’s life in every possible way. Their relationship quickly goes out of control as their fling takes a sudden turn and Emma finds herself in a nightmare. The cringe comedy them takes shape of a thriller series. Emma gets dangerously obsessed with Sally and begins to dictate her life. In an episode, she crosses her boundaries as she hides Sally in the attic. The audience is in for a ride for seven half-hour episodes. The first season has gained a 97% rating on Rotten Tomatoes. The series has also received a score of 77 out of 100 on Metacritic which means the response from critics has been very favourable.

Sally4Ever Season 2 Release Date: When will it premiere?

Season 1 of Sally4Ever premiered on October 25, 2018, and ran till December 6, 2019. Some critics called it “brilliant, but more than usually disturbing”, while there was also a section of the audience that took issue with some of the scenes portrayed in this series. However, most seemed to have loved it and are rooting for it to return. In order to find out why Emma has suddenly grown possessive towards Sally, we need a new season. However, no announcement regarding an air date has been made by the network.

Even though there has been no confirmation on Season 2, we expect the show to be renewed. There is a good chance of Sally4Ever Season 2 releasing this year in November or December 2019. Davis (Sally) is hopeful the series has been accepted by the audience enough to warrant a new season. She said, “I can imagine it’s going to be an acquired taste. It could be that not everyone is going to love it. But at the core, there is a dramatic story running through, regardless of all the comedy and uncomfortableness.”

While we wait for an update on Sally4Ever Season 2, check out the season 1 trailer to refresh your memories. If you haven’t seen the show yet head over to HBO to catch all the episodes of the previous season.