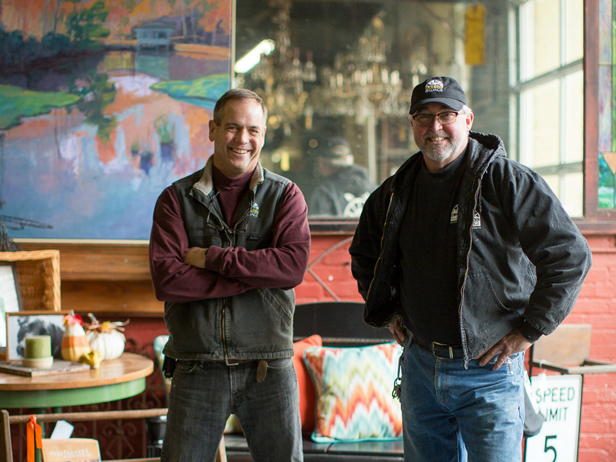 ‘Salvage Dawgs’ is a reality series that first premiered on November 8, 2012, on DIY Network. The show follows Black Dog Salvage, a renowned warehouse that features antique and commercial salvages, and its owners, who recover vintage pieces from old and historic buildings and structures of America. Once they are recovered, they sell them at a profitable price. The salvaged pieces can include doorknobs, cabinets, old bricks, ceramic tiles, antique mantels and anything that the salvagers seem fit.

There are many shows based on the concept of restoration but they generally revolve around cars and homes. To come up with a concept of salvaging is quite uncommon on the television and challenging as well. A lot of people do not understand the use of securing pieces from a structure condemned for demolition. The people on the show also take the risk of buying those pieces that are old and have no guarantee. However, there are people who are passionate about restoring them as well as collecting them, and ‘Salvage Dawgs’ follows such passionate people in the show.

The series has run on for a long time, 11 seasons to be exact, and fans might be wondering whether a Season 12 is on the way as well. We get into that here, after sharing a quick look at the show.

Salvage Dawgs Cast: Who’s in it?

Salvage Dawgs Plot: What is it about?

The series starts with the crew salvaging the Izard House, a vintage cabin built sometime in 1892. They are able to recover a Dixie Oak stove, a box bay window in one piece, old poplar wood, and a stairwell. In the following episodes, they restore wooden louvers, open-wire baskets, and an old barber chair by salvaging an extremely old mill.

Later in the season, the crew members salvage items from a luxury hotel (built in 1962), James House (built in 1893), an old tearoom (built in 1892), a few more vintage houses, stables, church, and cabins. The items restored are sinks, wood, doors, cabinets, begs, and musical instruments.

Over the seasons, the crew salvages items from more vintage houses, power plants, cabins, barns, restaurants, banks and more. In the last season of the show, the Dawgs salvage the 100-year-old Moose Lodge in Jamestown and collect newel posts, stained glasses, and window panes. While harvesting items from sporting goods store at the Capital Center, the Dawgs salvage an electrical system and remove exterior beams for a cantilever bench.

They salvage a home at Jamestown, N.Y, that was expanded to create a huge Moose Lodge. They complete their last round of salvaging in Largo, Md., once again at the Capital Center. They salvage a Mediterranean-style mansion and a governor’s mansion in Livingston, N.J.

Salvage Dawgs Season 12 Release Date: When will it premiere?

‘Salvage Dawgs’ Season 11 premiered on November 4, 2019, on DIY Network. The season was spread across 10 episodes and the last episode released on January 13, 2020. Many of us love being a hoarder. We like to preserve and store things even after people claim them to be useless. Well, they might be useless but, when you refresh your memories attached to things you store over the years, you do not just feel nostalgic but also get reminded of the good old days.

Something similar happens to architectural salvagers. By salvaging vintage pieces, they collect a piece of history. No matter how irrelevant or small those items might be for a lot of people, the pieces are still ancient and have historical importance attached to them. The successful tenure of the show for almost 7 years is proof that there are a lot of people who are as passionate about the concept as the salvagers featured in the series.

While there has been no official announcement regarding ‘Salvage Dawgs’ Season 12 yet, we like to believe there is some time before another installment, as Season 11 has ended quite recently. Our best guess is that ‘Salvage Dawgs’ Season 12 will release sometime in November 2020. We can expect a lot more vintage houses and structures that will take us deep into the history of America, as well as some really fascinating salvages.

You can catch the clipping from one of the previous seasons below to get an idea of the show.