‘Penny Dreadful: City of Angels‘ is a spin-off to the extremely popular and acclaimed supernatural television series, ‘Penny Dreadful.’ The Showtime series tells a story steeped in racial history while evoking supernatural themes at the same time. The show uses Mexican folklore as an entryway into the unknown. The show revolves around a Mexican-American family living in Los Angeles in 1938 and uses various actual historical events to weave a powerful narrative. You can read about the true events depicted on the show here.

However, both ‘Penny Dreadful: City of Angels’ and its parent show are supernatural series at the end of the day. The former derives its mythical quotient from Mexican beliefs and folklore. The protagonist, Tiago’s mother, is seen summoning a deity named Santa Muerte in the first episode, in order to seek her help when she senses things going awry.

Moreover, at the start of the first episode, Santa Muerte is shown with her sister, Magda who threatens to destroy humanity by lighting a spark that would lead to apocalyptic battles between nations, races, and even brothers. Natalie Dormer plays the role of Magda and is seen in multiple disguises throughout the episode. So, who is Santa Muerte and Magda? What kind of relationship do they share?

Who Are Santa Muerte and Magda? 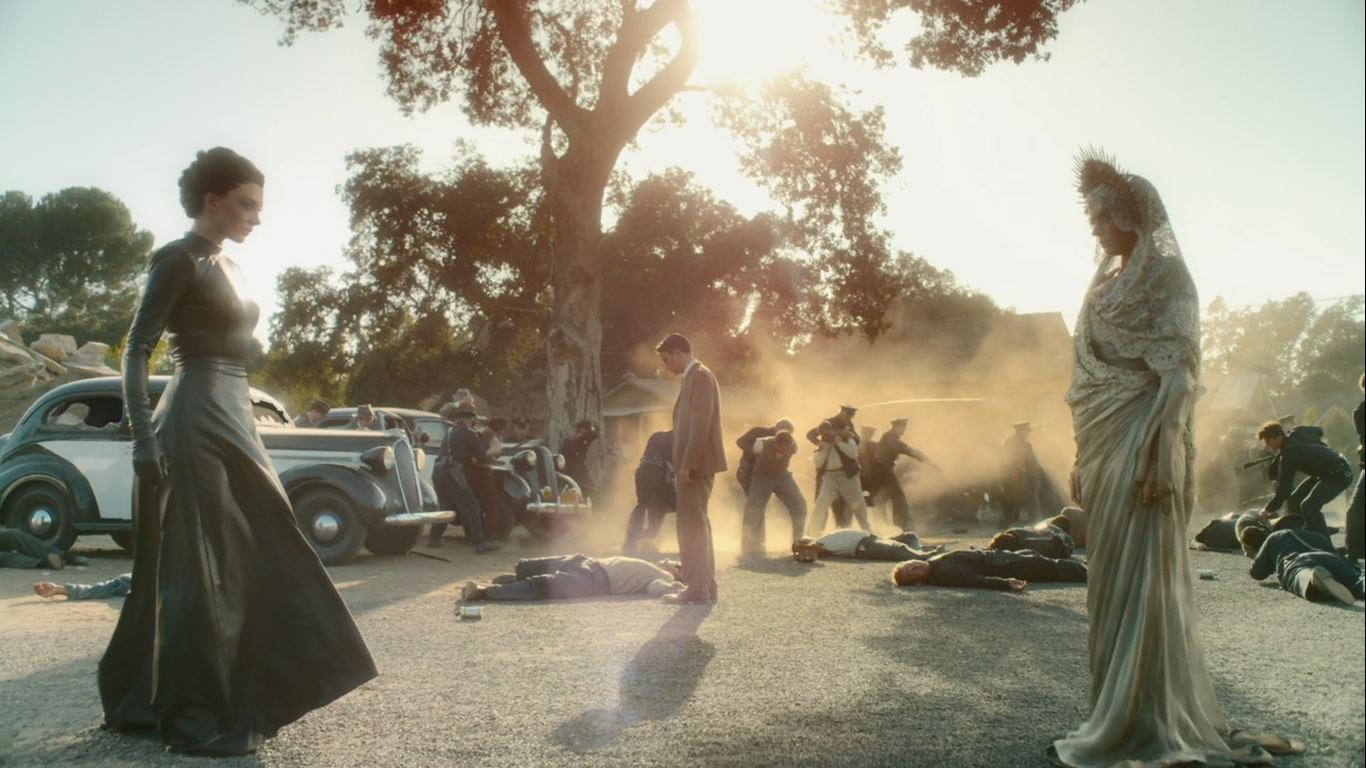 “La Parca” literally translates to “the parched one” in Spanish. As a matter of fact, those who worship Santa Muerte offer the deity daily offerings of water, as it is believed that she suffers from persistent thirst due to her skeletal composition. The Spanish never worshipped La Parca and she was just a mythological figure. However, indigenous Mexicans, before Spanish colonization, believed in several deities of death like the Mayan Yum Cimil and Mictecacihuatl. Hence, when the Spanish brought La Parca to Mexico, it is believed that the indigenous population thought of her to be similar to other death deities and began to worship her.

Santa Muerte is mostly worshipped by women. However, her worship is becoming increasingly normalized and accepted. This is mainly due to the growing popularity and acceptance of the Day of the Dead or Dia de Los Muertos. In fact, Santa Muerte is also associated with an entirely separate religion. However, it is also believed that Santa Muerte speaks to, or can be summoned by anyone who needs her regardless of their beliefs. For example, one can practice Catholicism and still worship Santa Muerte.

Magda, on the other hand, is completely fictional. There is no mythical or supernatural figure known as Magda that exists in Mexican folklore. That is solely a creation of John Logan. She was invented by Logan as a form of alter-ego to Santa Muerte. By doing so, he could portray the darker side of Santa Muerte’s associations with death without really painting Santa Muerte herself as evil.

Firstly, Santa Muerte is seen as a very positive deity. Women worship her for fertility. Santa Muerte is seen as a caring deity who values life as much as she values death. She is also thought to bless worshippers with better health and financial success. However, Santa Muerte didn’t always have positive associations. For instance, various death cults and those associated with drug trafficking have been linked to the worship of Santa Muerte. Some of Santa Muerte’s best worshipers are narco bosses at the core of the Mexican criminal circuits. Therefore she has gained a reputation as the “narco saint,” in spite of other devotees having no associations with anything illicit whatsoever.

However, the rise of drug trafficking actually has a lot of impact on people’s beliefs in Santa Muerte. The Mexican Drug War has been responsible for increased death rates, and many sources believe that Santa Muerte is seen as a symbol of hope. However, for this very reason, Santa Muerte is rejected by the Catholic Church since Jesus rose from the tomb and overcame death as one of his final acts on earth, they tend to view death as an enemy rather than a passage.

Read More: Where Was Penny Dreadful: City of Angels Filmed?