Where Was ‘Saving Private Ryan’ Filmed?

The film is based on the true story of the Niland Brothers. Robert Rodat serves as the writer, who has films like ‘Tall Tale,’ ‘Fly Away Home,’ and ‘The Patriot’ to his credit.

Set during the Invasion of Normandy in June, 1944, the film follows Captain John Miller and his squad, who embark upon a mission to bring home Private James Francis Ryan, after he loses his three brothers to combat. Unfortunately, they cross enemy lines (Nazi-occupied territory) in the process of establishing contact with Ryan’s unit, leading to a lot of chaos. Apart from this, each man starts down the path of self-discovery, to win over an uncertain future with integrity, courage, and honor.

Having won 5 Academy Awards, ‘Saving Private Ryan’ has been a fan favorite for decades. It has received critical acclaim for its realistic portrayal of battle scenes, by being visually stunning and violently scary. On one end, it captures the perils of war, and on the other, it preaches the value of life. Thus, making it one of the few movies that instill your faith in the power of cinema. If you’ve watched the film, you know what we mean.

The intensity of the scenes is manifolded by the breath-taking visuals and hauntingly beautiful score, making them equally a character, as others. Now that we mentioned the visuals of the film, let’s learn in detail about where ‘Saving Private Ryan’ was filmed.

When it comes to the filming locations, Spielberg went all in! The film was extensively shot in England and Ireland, except for the cemetery scene, the filming of which took place in France. Production was also supposed to take place in Seaham, County Durham, but government restrictions prevented it. 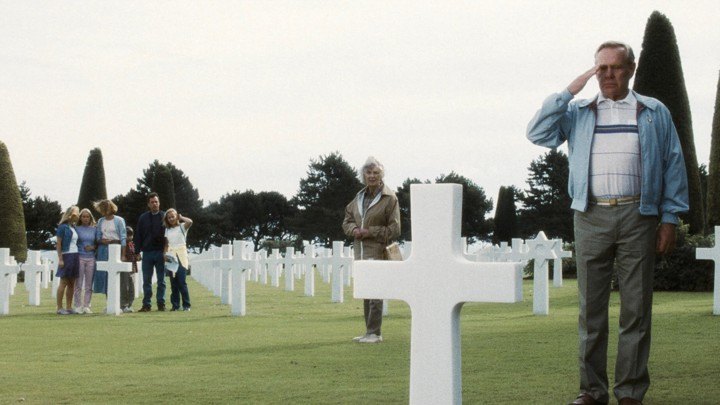 Located in Colleville-esur-Mer, Normandy, the cemetery and memorial honor the American troops who lost their lives in Europe during the World War II. The site contains around 9,400 burials, honoring everyone who fought the war.

The film features the cemetery at the very beginning, when World War II veteran Private Ryan visits Captain John Miller’s grave, accompanied by his family. We can also spot the cemetery, at the ending of the film, when Ryan asks his wife if he was worth the sacrifice.

Hosting over a million visitors per year, The Normandy Cemetery is the most visited cemetery run by American Battle Monuments Commission, the agency responsible for the maintenance of memorials and cemeteries in and out of the US. 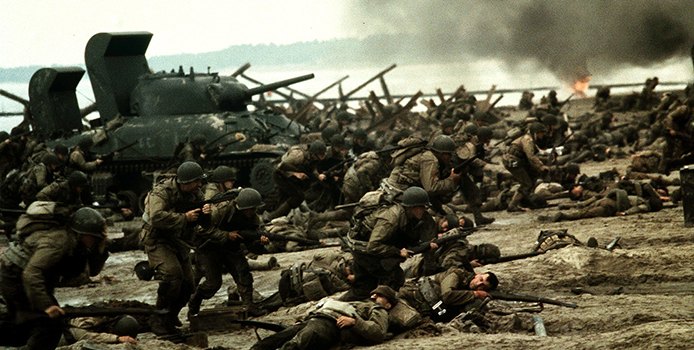 For shooting the D-Day Landings, Spielberg wanted a location that could reproduce the exact event that went down at Omaha Beach, where thousands of American soldiers lost their lives. And Ballinesker Beach, fit the bill.

Located on the east coast of County Wexford, the pristine stretches of white sand of the Ballinesker beach was transformed into a battlefield over a few weeks. The massive x-shaped metal structures which were dropped to prevent the landing were constructed on this beach. Spielberg used gallons of fake blood, barbed wire, and explosions, and the sequence alone cost around $12 million to film.

It demanded the participation of 1,500 extras, which included a few members of the Irish Reserve Defence Forces. The production unit called in members of local WW II enactment groups to play German soldiers. Also, 20-30 actual amputees were used to portray the American soldiers who were injured during the landing. After 15 days of filming, the set was destroyed, and the beach restored its original beauty.

The popular film magazine Empire describes the thrilling Normandy landings sequence as the “best battle scene of all time.” The scene is also listed as Number 1 on TV Guide’s ’50 Greatest Movie Moments.’

Towards the end of the film, it is in Ramelle, a French village, where Ryan is finally discovered. Ramelle is the only fictional town reference used in the movie. It was built from scratch at the former British Aerospace factory, which sits around 20 miles north of Hertfordshire.

Spielberg used the set again for his hit TV series, ‘Band of Brothers.’

An ideal location to shoot Gothic horror and traditional dramas, Wiltshire is highly popular with television and film crews. It has been featured in films like ‘The Wolfman,’ ‘Harry Potter and the Half Blood Prince’ and ‘Creation.’

In ‘Saving Private Ryan,’ the scene that delivers the heartbreaking news to the Ryan household was filmed in Wiltshire. The farmhouse was constructed on Gunsite Road in a village called West Kennett. It was later removed, after the filming.

The scenes which feature the military vehicle attack and German machine-gun emplacement were filmed on the lands of Thame Park, Oxfordshire. Spielberg used the Chapel in Thame Park grounds as the French church in which the American soldiers spend the night.

By respecting the authenticity of the actual events, and being so aware while choosing the filming locations for ‘Saving Private Ryan,’ Spielberg proves that beauty does lie in the details.