Randy Fenoli From Say Yes to the Dress: All You Need to Know 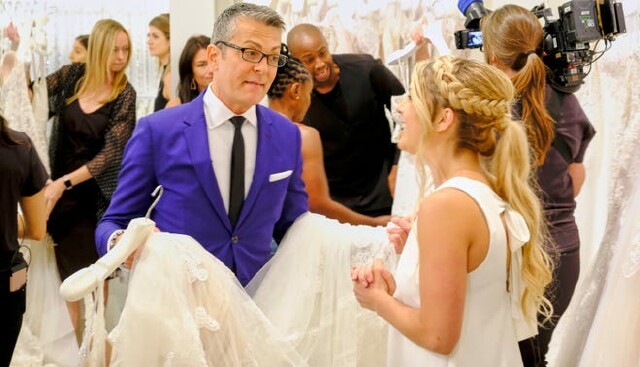 ‘Say Yes to the Dress‘ is a dream show for many a bride who wants to don the perfect outfit as they walk down the aisle to a new chapter of their lives. The series has gained immense popularity over the years, and a lot of it has to do with the expert consultants. One of the most respected people in the series is Randy Fenoli, and it is no surprise that most brides want him to help with the attire. So, who is Randy Fenoli?

Randy was born on April 14, 1970, in Mount Vernon, Illinois. However, he opened up about the hardships in his childhood, during an interview. Randy spoke about how he was born and raised on a farm, and his father was quite abusive. For his entire life, he prayed to get away from the farm and his family. Due to the harsh circumstances, Randy needed an outlet, and Fenoli found comfort in fashion. At the age of 9, he started using his mother’s sewing machine.

She didn’t take too kindly to it and told him not to use her good scissors or sewing machine. Of course, Randy didn’t listen. He sewed his first dress, which his mother wore to work the next day. Down the line, the two remain close, as you can see from this post below.

Mom, Chewy and I want to dearly Thank EVERYONE for your love, prayers, and well wishes! She’s home now and it’s going to be another 6-8 weeks for her leg to heal. Chewy & I are taking good care of her. Again, thank you all for so much love! ❤️🙏❤️ #love #mom #family

In the past, Randy has been linked romantically to Liza Minnelli. Although he’s taken the matter in good humor, Randy has clarified that he is single. It seems that he is closest to his pooch, Chewy, and you can see the two of them having a good time.

The most wonderful thing in my life is sharing precious moments with my little boy, Chewy! He give me so much love and joy! What fur-baby brings YOU happiness? #love #puppy #Dog #blessed

Although he discovered the passion for fashion at an early age, Randy received his professional training at the prestigious Fashion Institute of Technology, where he won several awards. Right after graduation, he launched two bridal industry collections, Randy Fenoli for the Diamond Collection and Randy Fenoli for Dressy Creations. He’s received two DEBI awards (Design Excellence in the Bridal Industry), the most prestigious awards for bridal designers.

He has been associated with Kleinfeld for a long time, and though most people believe he’s still associated with the reputed brand, Randy has gone his own way in recent times. He’s now an independent consultant and earns even more money that way. In an interview with The New York Times, Fenoli said, “Why should I work for someone else in a full-time job when I can earn $20,000 for a four-hour personal appearance?”

Whatever one says, the man is committed to his job. Here’s his most recent picture celebrating the love of all the clients he has worked with.

HAPPY ONE YEAR ANNIVERSARY to all of my beautiful couples! It was such an honor to be a part of your special day! LOVE YOU ALL SO MUCH!!! @sayyes_tlc @tlc @misshayleypaige @kleinfeldbridal @theweddingguys @jamielevinephotography @buddyvalastro #love #wedding #centralpark #bride #bridalmakeup #weddingdress #bridalparty #fashionable #memories #fallbackfriday

Randy also remains a socially aware individual who does not shy away from making political statements. Here’s his post expressing solidarity for the Black Lives Matter movement, which gained steam after the tragic demise of George Floyd in the hands of the Minneapolis Police. He’s also expressed a need for positivity, which we can all use in these trying times.

With all the challenging, sad, and depressing things going on in the world right now, we must keep hope that there are blue skies and happier times ahead. Sending you love! #StayPositive #StayStrong #BlackLivesMatter #Coronavirus #love #joy #peace #healing