‘Schitt’s Creek‘ is a Canadian sitcom that has received widespread critical acclaim for being effortlessly feel-good and humorous. The series proves to be exceptionally warm and hilarious at the same time thanks to some witty writing and talented acting. Moreover, it also proves to be extremely progressive and does so without feeling strained or unrealistic.

The show is created by the father-son duo of Eugene and Dan Levy. In the series, too, they act as father and son. Eugen Levy plays Johnny Rose while Dan plays David Rose. The veteran actress, Catherine O’Hara, plays Moira Rose while Annie Murphy plays Alexis Rose. Interestingly, Eugene Levy’s daughter (and Dan’s sister), Sarah Levy, is also a member of the show’s cast. The show revolves around the once-ultra-wealthy Rose family who get forced to move into a tiny, ugly town called Schitt’s Creek after losing their finances.

In the sixth season of the show, Johnny tries to secure funding for the expansion of the Rosebud motel empire. He wants to make it a franchise. On the other hand, Moira’s movie, ‘The Crows Have Eyes 3: The Crowening,’ gets released, and she hires Alexis as her PR assistant. Moreover, Moira also gets an offer to reprise her most famous character on the reboot of ‘Sunrise Bay.’

Alexis, on the other hand, starts to see extremely viable career options. However, she has to choose between shifting to the Galapagos to be with Ted or breaking up with him. Meanwhile, David prepares for his wedding with Patrick. Towards the end of the series, Johnny and Moira are seen driving out of Schitt’s Creek. Johnny makes the car stop once again to look at the town’s sign one last time. This is what it looks like: 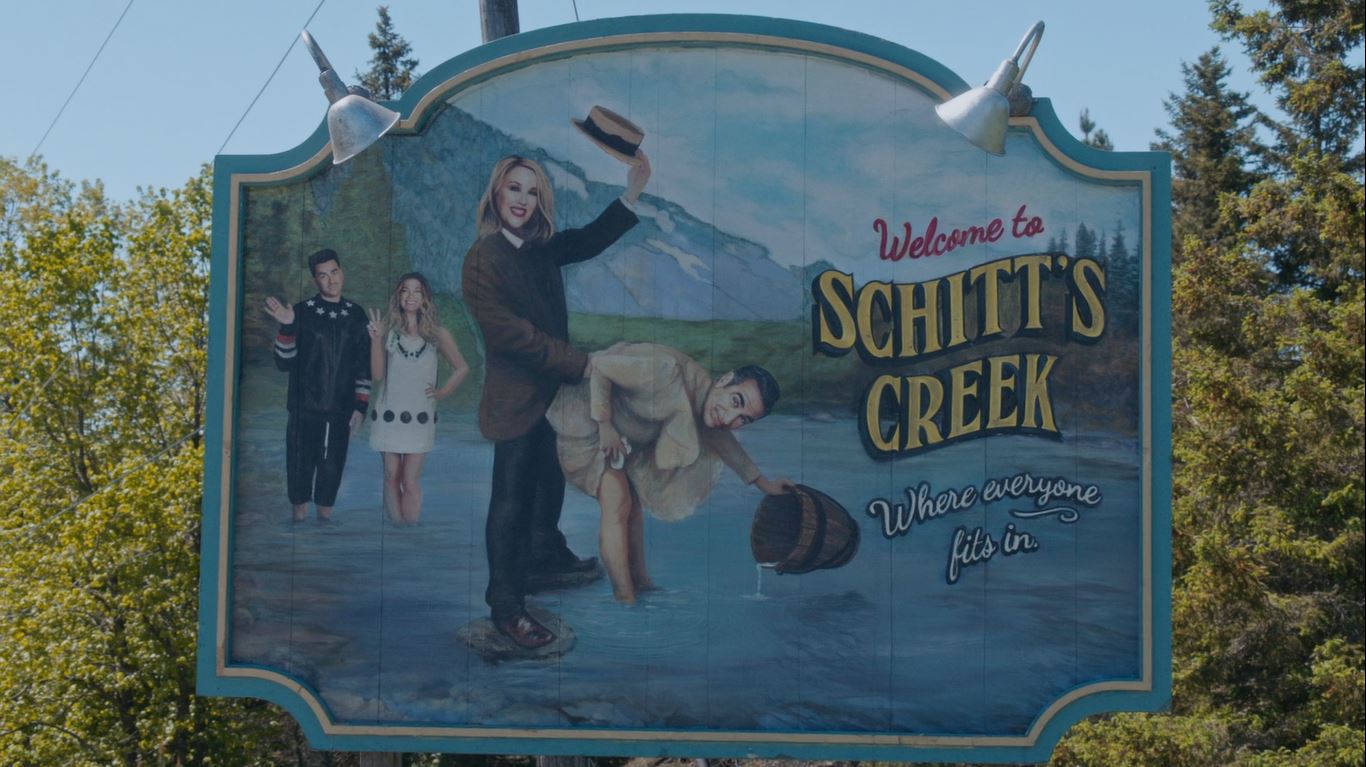 The ending of ‘Schitt’s Creek’ serves as a throwback to probably one of the most hilarious moments in the entire series. As a matter of fact, it is a throwback to what could be considered a moment that sets the stage for the Canadian sitcom. This moment comes in the third episode of the first season when Johnny is seen attempting to sell Schitt’s Creek. However, Johny notices the town sign, which shows two of Roland’s ancestors in a compromising position. He believes that that could prove to be a difficulty in selling the town.

In the final episode (the final scene, to be precise), it is revealed that Roland has the sign painted over to depict the Roses. It serves as a farewell gift. Non-viewers might find this gift to be distasteful. However, it is a testament to Roland and Johnny’s friendship. Roland is often shown making fun of Johnny in a friendly manner. The sign proves to be a fitting gift in that regard. Moreover, the sign is also a testament of the love that the Roses managed to get from the Schitt’s Creek residents: be it from Moira’s Jazzagals, or through David’s store. There is Alexis’ friendship with Twyla too.

So, where did the Roses end up at the end of the series? Well, Moira finally finds work in the ‘Sunrise Bay’ reboot. Johnny manages to secure funding for the Rosebud motel empire to turn it into a franchise. At first, the couple planned on moving to New York City. However, after Moira finds work, Johnny decides to run the Rosebud Motel Empire from California instead.

However, Alexis decides to stick with her plan of going to the Big Apple. This proves to be another proof of her newfound independence. She aims to stand on her own feet, and now, she can truly do that. It will be challenging, but by the end of it, she would have known that she did it all by herself. She does not even accept a large sum of money from Twyla because of that reason. David, on the other hand, is the only Rose who decides to stay in Schitt’s Creek. He has found everything he needs: a loving partner in Patrick, a genuine friend in Stevie, and an up-and-running business in Rose Apothecary.