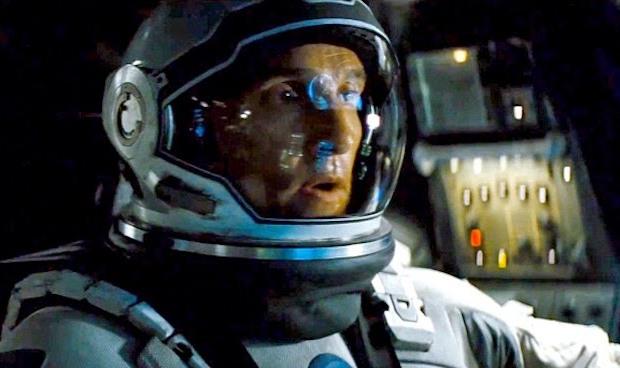 Interstellar, Christopher Nolan’s most complicated movie, is not perfect, and neither is it trying to be (as I write in my review here). It uses the science of interstellar travel, relativity, black holes, wormholes, and fifth Dimension as a tool to tell an emotional father-daughter story.  So, expecting ‘Interstellar’ to be 100% scientifically accurate is not only foolhardy but also, not the right way to watch the film. In fact, many of the theories that ‘Interstellar’ uses haven’t yet been proved, so it’s virtually impossible to portray them on-screen. Having said that, it doesn’t mean whatever ‘Interstellar’ deals in is all bullshit. In fact, far from it. After all, there’s a method behind all the madness that you see in Interstellar. So, let’s tackle it one by one. Here is the explanation of science and logic behind Interstellar. 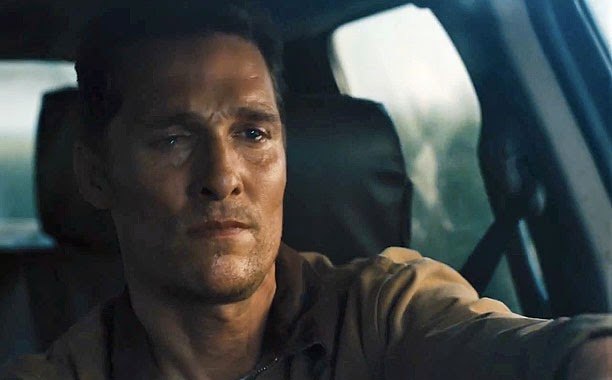 Early on in the film, we find out that NASA is working on a plan to have humanity leave the Earth in the face of an impending catastrophe. The scientists have also learned that an unknown civilization (referred to as “they,” read below) have put created/put a wormhole near Saturn (read about wormholes below). The scientists have also found out after sending a number of expeditions in space that there are three habitable planets in another galaxy. They have named the planets after the explorers who went in search of them: Miller, Mann, Edmunds. And therefore, to understand which out of three planets is actually habitable, they are planning to send a team of scientists (Endurance) to these planets. Meanwhile, Professor Brand (Michael Caine) himself has been working to solve a quantum equation for the last several years that will solve the riddle of space, time, and gravity.

Plan ‘A’: During the time Endurance will be on its interstellar voyage, Dr. Brand will continue working on the equation, which, if solved, will allow them to figure out all the five dimensions, including gravity. After this, their plan is to carry all the remaining population of Earth in a massive space station to whatever the most habitable planet is.

Plan ‘B’: If Dr. Brand fails to solve the equation, they have a fallback option. NASA have harvested a bank of fertilized embryos which will be carried by the Endurance team on their interstellar voyage, and in case the Earth gets destroyed, they will raise the next generation of humanity on a planet that they find most habitable.

Later in the film, Dr. Brand will reveal that Plan ‘A’ was never possible. To completely solve the equation, he would have needed data from the center of the black hole, which was impossible to get, and hence the whole plan was a lie.

Wormholes, and how do they work?

I think the film does a good job of explaining the concept of wormholes in a very short and sweet way. One of the scientists, Romilly, explains it pretty well using paper and pencil; and it is precisely the concept of wormholes. It is a shortcut in spacetime. So, what would take light years to reach in space if followed the normal route, can be reached in a matter of minutes/hours/days through wormholes. Obviously, no wormholes have been discovered yet, but wormholes were always the part of solutions to the Einstein’s field equations for gravity.  Anyway, in the movie, the group of scientists uses the wormhole (which initially scientists think has been put near Saturn by aliens) to reach to another galaxy where the three planets with life potential exist.

Black holes and compressing of time 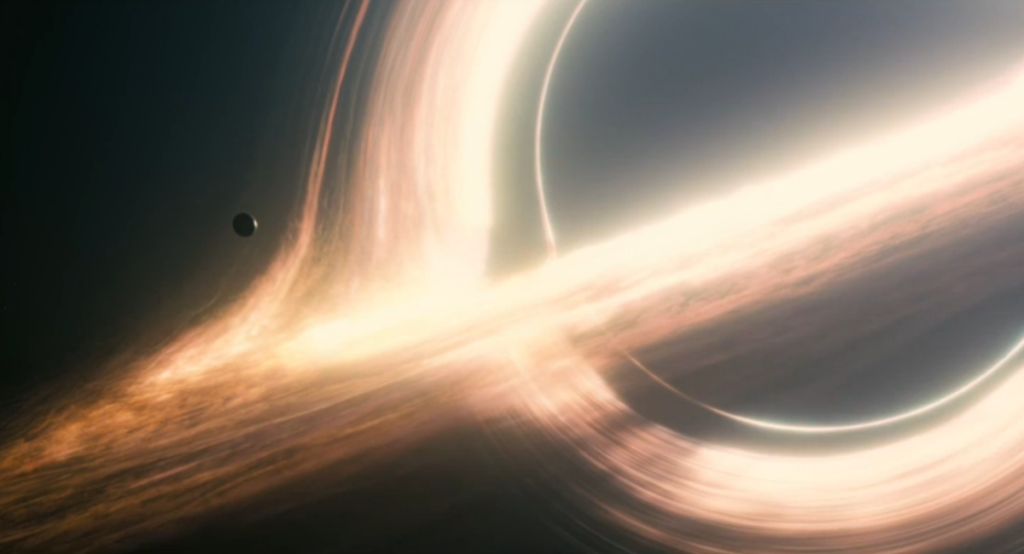 Black holes are regions of spacetime from which gravity prevents anything, including light, from escaping. Kip Thorne, who also helped Christopher Nolan to come up with black hole models, explains Black holes as: “When you fall into a black hole, everything that falls in after you over millions of years, as seen by you inside the black hole, comes pounding down on you in a fraction of a second, because of the enormous differences of time flow,”

In short, a place where gravity is excessively strong. So, strong that it even dilates time. The first planet, Miller, that Endurance team visits, has one hour on its surface correspond to seven years on Earth. It is because, as mentioned in the film, Miller is located very close to a black hole called Gargantua, and hence time moves much slower on Miller than on Earth. 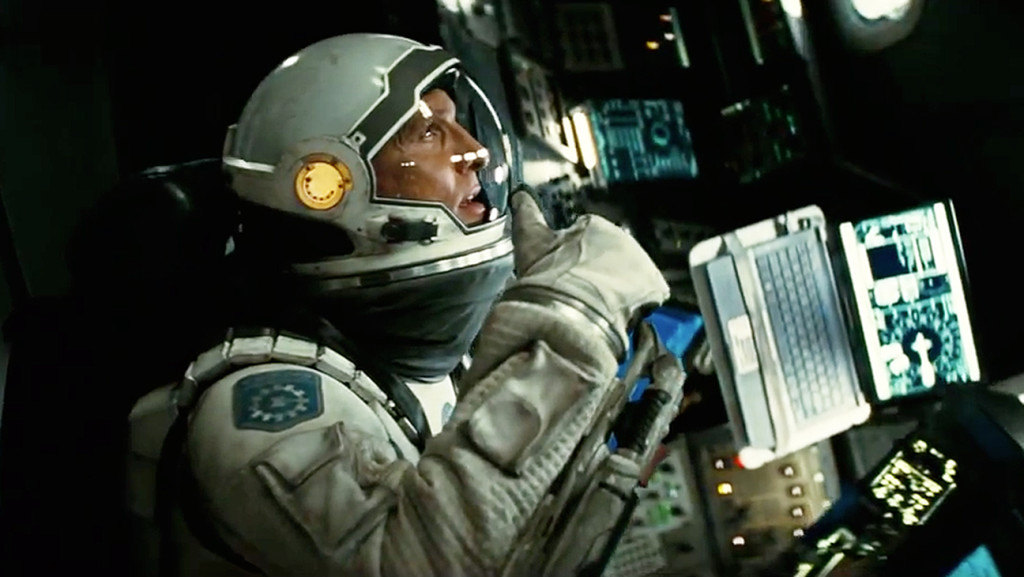 Initially, NASA scientists think “they” to be some extraterrestrial aliens, who are advanced enough to have figured out the five dimensions and hence, can manipulate space and time, and for some unknown reason, are also willing to help humans escape the doomed Earth. NASA scientists also believe it is “they” who have placed the wormhole close to Saturn so that humans can use that as a shortcut to other habitable planets. It is only in the final act of the film when Cooper (Matthew McConaughey) falls into the black hole to finally find himself in a Tesseract, does he realize that “they” are not aliens but actually future humans. The future humans, who have mastered laws of the universe — space, time, and gravity. It is the future humans, too, who constructed the Tesseract for Cooper to communicate with his daughter, and hence, save humans in the past. The implication here is that future humans are trying to save humanity so that they themselves can exist. (I understand, this is slightly ridiculing, since, future humans exist because someone in the past was able to survive. It is kind of never-ending loop).

Fifth Dimension and the ending

The most “difficult to understand” part of the film is Tesseract or the cubic prism, where Cooper finds himself after his spaceship gets destroyed inside the black hole. Basically, it’s a three-dimensional representation of the five-dimensional space. And as already mentioned above, this Tesseract was created by future humans so that Cooper could communicate the data about singularity (center of the black hole) to his daughter, Murph (Jessica Chastain), so that she could solve the quantum equation. So, what is the Fifth Dimension, and why is it important to understand? Let’s dive in.

So, as we all know, we live in a three-dimensional space. As per Einstein and his theory of relativity, time can be considered as the 4th Dimension. If you studied maths and graphs, you would remember that on a two-dimensional graph, we represent the two dimensions with axis x and y. Also, to represent space, we must have a third axis z. With the three axes: x, y, z, we represent the 3D space. Now, imagine this three-dimensional space across a fourth dimension: time. So, what we are saying is, just like in a 2D graph for a constant x, we can go up and down the values of y; similarly, in a 4D space for a constant x, y and z we can go up and down the 4th Dimension, that is time. That’s why and how the theory of relativity supports time-travel.

Now, imagine a 4D space across a fifth dimension where gravity can, too, be controlled. Cooper falls or is rather brought by future humans into this five-dimensional space because:

1st: In a 5D space, he can traverse across time, and
2nd: Since gravity, too, is a variable entity in 5D Space, he can use gravity to communicate to his daughter the quantum data that was needed to solve the equation.

And that’s exactly what Cooper does. He time-travels to his past and uses gravity to move the hands of Murph’s watch to communicate the data to Murph in Morse code. With the data that she gets from her father, Murph is able to solve the equation, which enables humans to master space, time, and gravity. In short, they could now play around with space, time, and gravity. That’s why you will see, towards the end of the film, the sort of world that humans have created near Saturn, a world that defies rules of gravity and space.

I hope I was able to clear most of your doubts about ‘Interstellar.’ I would seriously advise, irrespective of whether you like the film or not, to have a second go at it. I bet you will appreciate it much more. In the meantime, if you have any further questions or doubts, write them below in comments. I will try to answer them to the best of my knowledge.