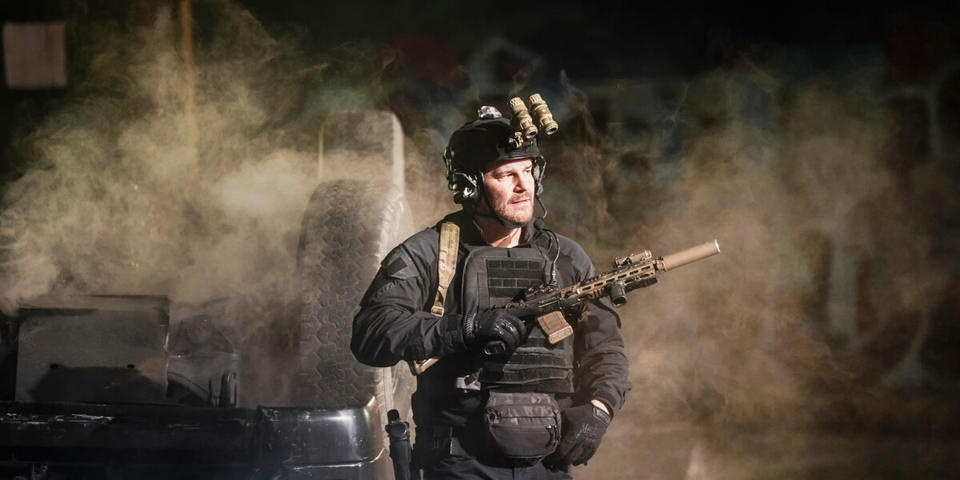 A Benjamin Cavell creation, ‘SEAL Team’ revolves around the personal and professional lives of the officers in the Bravo Team, a sub-unit of The Naval Special Warfare Development Group and a primary special operations force of the U.S. Navy. Currently, in its third season, the military drama has seen dynamic shifts in the relationships of its members. After the infamous brawl at the bar, Sonny has been sent to Texas to attend an advance armory school. Meanwhile, Clay is considering a deviation, while Jason is being pressurized by Lindell to step aside from his position.

In the latest episode, titled ‘Edge of Nowhere,’ Ray tries to lecture Davis, who puts him in his place. He also gets into an ugly fight with Thirty. Meanwhile, Mandy blackmails a corrupt employer of one of the members of the Taliban group, to spy on the dangerous group and offer some Intel to the team. They find out that the extremists are all set to execute a plan to disrupt the peace negotiations between the Taliban leaders and the U.S. Now, you must be wondering about what goes down in the upcoming episode, i.e., SEAL Team Season 3 Episode 19? Well, we are here to help you with that.

‘SEAL Team’ Season 3 Episode 19 is slated for a release on April 29, 2020, at 9 pm ET on CBS. The show follows a weekly format, with each new episode slated to be premiered every Wednesday.

You can watch the ‘SEAL Team Season 3 Episode 19’ by tuning to CBS at the above-mentioned time. You can also catch the show on official website of CBS and the CBS app.

If you don’t have a cable subscription, you can watch the show on DirecTV, and Fubo TV. ‘SEAL Team’ is also available as a VOD service on YouTube TV. You can also purchase the episodes on Amazon Prime.

The upcoming episode is titled ‘In the Blind.’

In the penultimate episode, the elite unit of Navy SEALs might get in trouble after the wayward Taliban Group might launch a surprise attack. Facing a direct threat, the officers might strive to extract a connected member that could provide them with new information regarding a terrorist leader.

Meanwhile, in Texas, Sonny might continue to mend his relationship with his father, Emmet Quinn. Also, it looks like Sonny and Hannah are developing a connection that goes beyond friendship. Does that mean Sonny will finally have someone he connects to at a deeper level? As for Clay, we can expect him to have thoughts about his decision to leave the team after his brutal experience at leadership.

Now that the team has a confirmation from the DIA that Elham Wali, the man they let go, is probably responsible for all this, what will Jason and the team do? Will they be able to catch him again? With an immediate danger lurking in the background, the team will have to pull out all stops to ensure the success of mission Afghanistan.