Are Sean and Abby From 90 Day Fiance Still Together? 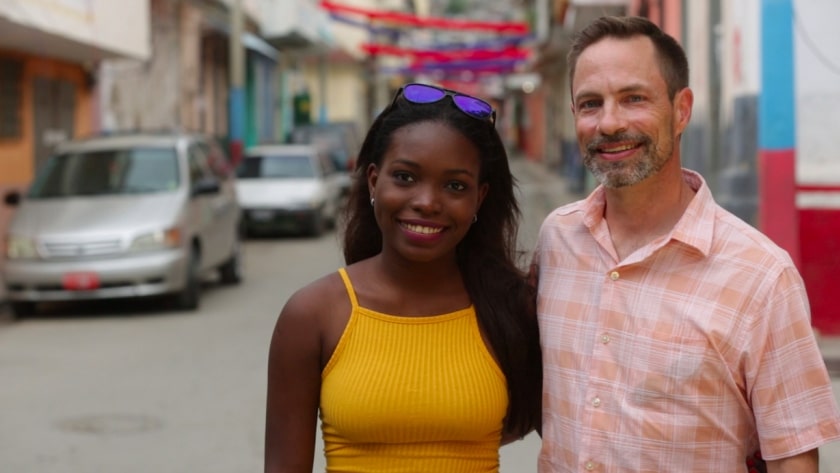 ‘90 Day Fiance: Before the 90 Days‘ is a fascinating series that keeps us entertained with the drama that ensues after international couples meet up for the first time and try to figure out if they want to keep their relationship going or not. If you’ve been following the 90 Day Franchise, you now that while love is expected to conquer all, it is not always the case – especially when cultural differences, age gaps, and ex-boyfriends are added in the mix.

Sean Hiler from Springfield, Ohio, was 47 when he met 20-year-old Abby St. Germain from Haiti on an online dating website. She messaged him first, and after a while of talking, Sean asked for her number. The pair started talking on video calls and their relationship began.

Their time on season one of the ’90 Day Fiance’ spin-off was drama central. When Sean visited Abby in Haiti, he found out that she had been living with her ex-boyfriend Chris, which gave rise to a lot of suspicion and jealousy. Things did not improve when Abby mistakenly called Sean “Chris” during a confessional. Sean went on to demand that Abby show him her phone so that he could check her messages to Chris and find out the truth, but Abby refused and, after a while, walked out of the room.

Things clearly got a little better for them as towards the end of the season as Sean got down on one knee and proposed to Abby. In the tell-all episode, the couple was still happily engaged, and Abby admitted that she would be moving out of Chris’ apartment very soon. The question that remains, though, is, did they make it down the aisle?

Are Sean and Abby Still Together?

No, they are not. Back in March of 2018, Sean announced on his Instagram that Abby had called off their engagement. He later did a half-hour Instagram live where he revealed the reasons behind the break-up and his feelings towards her. Apparently, Abby was tired of all the hate that she was receiving online and in-person from 90 Day fans about her behavior on the show. Along with this, Abby told fans that Sean had hesitated to move to the Dominican Republic to be with her while she finished college. So, the couple called it quits.

Sean and Abby do not seem to have any bad blood and look very happy living individual lives. Sean currently appears to be doing a lot of remodeling and renovation work on houses, and according to his Instagram bio will soon open his business in the Caribbean. He doesn’t seem to be dating anyone as of yet but is enjoying life with his dogs.

Living it up on New Year’s Eve.

Abby moved on from Sean just a month after their break-up and started dating another older man from America, a businessman, but that relationship didn’t last either. Eventually, Abby found Louis from the U.K., and after nine months, was engaged to him. The couple has a YouTube channel together where you can see what all they get up to. In December of 2019, she announced that her fiance visa for the U.K. was approved, and she was moving there to be with Louis.

Hey Guys! I really wanted to keep things private, but I thought since I let you know we were applying for the Family of a settled person Visa(Known as the UK fiance Visa) that you should know that my Visa is APPROVED!!🇬🇧🇬🇧🇬🇧🇬🇧🥳🥳🥳🥳🥳 I'm moving to the UK to be with The man I love. I'm really excited for this new beginning. God knew how hard it was for us everytime we had to say Goodbye. But No more Goodbyes!❤❤🇭🇹🇭🇹🇭🇹🇬🇧🇬🇧🇬🇧🇬🇧 I love you baby @dubesss

Abby and Louis got married in early 2020, and in the post where she announced that she said “I Do,” she gushed about how good her husband was to her and how amazing he made her feel, stating: “His love is truly unconditional. He makes me feel loved every single day. He talks about his feeling. He laughs with me not at me. He defends me. He makes me feel safe in every way. I love him so very much and I’ll show him every single day. I’m excited for this lifetime journey. You really are the best husband anyone could ask for. I’m also very blessed to have your family as my in laws. I’m honoured to be your wife and carry your last name.”

I said I do to my best friend. This is probably gonna be a long caption but it is what it is. I'm very blessed to have Louis in my life. I'm so grateful to him for having giving me a chance when probably nobody else would because of my past mistakes. His love is truly unconditional. He makes me feel loved every single day. He talks about his feeling. He laughs with me not at me. He defends me. He makes me feel safe in every way. I love him so very much and I'll show him every single day. I'm excited for this lifetime journey. You really are the best husband anyone could ask for. I'm also very blessed to have your family as my in laws. I'm honoured to be your wife and carry your last name. You really have changed me and taught me so much. I promise to love you, respect you and be faithful to till death do us part.❤ Mr and Mrs Dubell •#haitiangirl #haitianwomen #UK #relationshipgoals #justmarried #relationshipquotes #couplegoals #interracialcouple #wanderlust #Haiti #passportready #loveisblind #loveisland#ldr #interracialrelationship #interracialcouples #wanderer #interracialmarriage #weddinggowns #weddingplanning #swirler #bwwm #haitianfood #braids #naturalhairstyles #healthy_hair_journey #bigchop #makeuptutorials #eyebrow #4chairdaily

Read More: Are Mike and Aziza From 90 Day Fiance Still Together?