9 Shows/Movies You Must Watch if You Love Love, Death & Robots

Bright neon lights, shiny sharp lines, diverse animation styles, gore, violence, sex, monsters, robots, intense sound effects, photorealistic environments, animated artistry, violent masculinity, and darkness. All these words to just describe ‘Love, Death and Robots’ and I can probably use a hundred more. David Fincher has given us some of the most amazing pieces of cinema in the past like ‘Seven’, ‘Fight Club’, ‘Zodiac’, and ‘Gone Girl’. Add another title to his name.

‘Love, Death and Robots’ is a series of “shorts”, that’s what David likes to call these instead of episodes. All the shorts narrate different stories that are intense, gory and R-rated. The core theme of all of these obviously being love, death, and robots. So we decided to make a list of our own that may not be exactly the same as ‘Love, Death, and Robots’ but surely has shows and movies that are NSFM (Not Safe For Mind) just like it. A warning: scroll down at your own risk, the list below may not be suitable for all. You can also watch several of these movies and shows like Love, Death and Robots on Netflix, Hulu or Aamzon Prime. 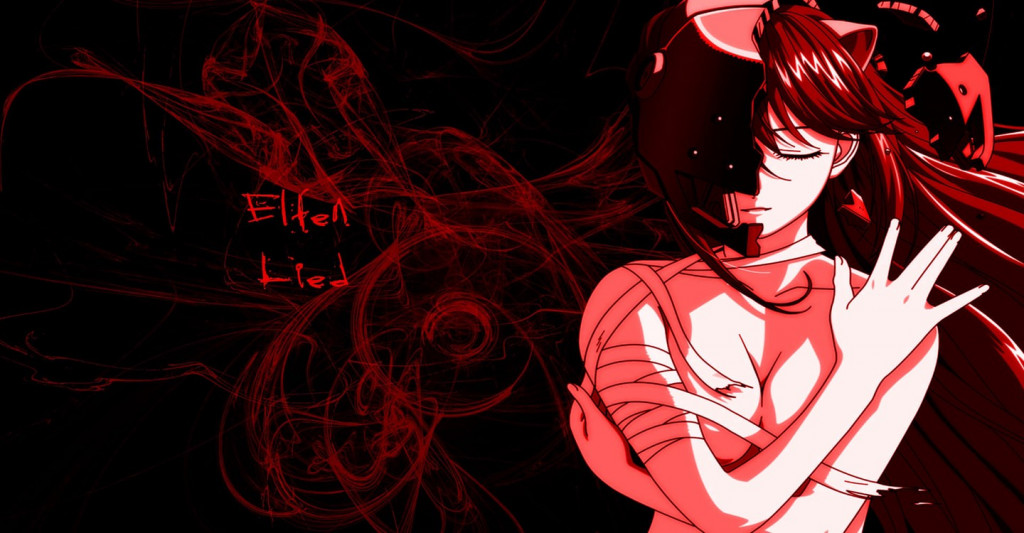 ‘Elfen Lied’ is one of the most beautiful and graphic animes ever. It has a very rich story that will send you through a wave of emotions. The story is of a harmful genetically advanced girl named Lucy who somehow escapes the government and is later found lying naked on a beach by a university couple. The two take her in without realizing who she is and the number of dark powers that she holds within her. Lucy has a split personality and that makes it even harder for anyone to identify the truth that she hides deep within her. But this one is surely not for the faint-hearted because of the amount of gore and nudity has, but isn’t that the whole point of this list? Still, watch this at your own risk. 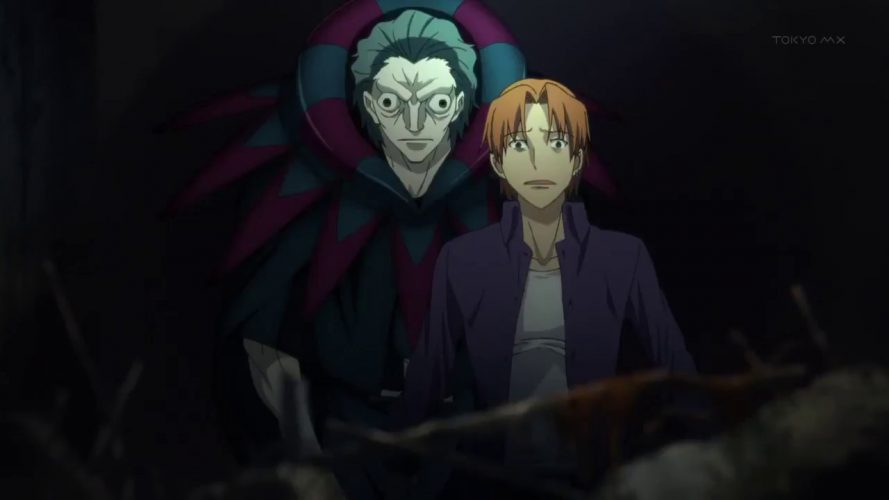 Seven Magi are chosen to get a chance to win a Holy Grail. Each Magi orders a group of superheroes to fight against each other and eventually win the holy grail that holds the ability to grant any wish of its owner. The intense game of survival between all of them leads to the most brutal and disturbing wars. This anime series has a beautiful storyline backed up with some really amazing music. The anime also has the darkest characters with really dark stories revolving around them. Watch this if only you can look past some very disturbing characters and bloody scenes. 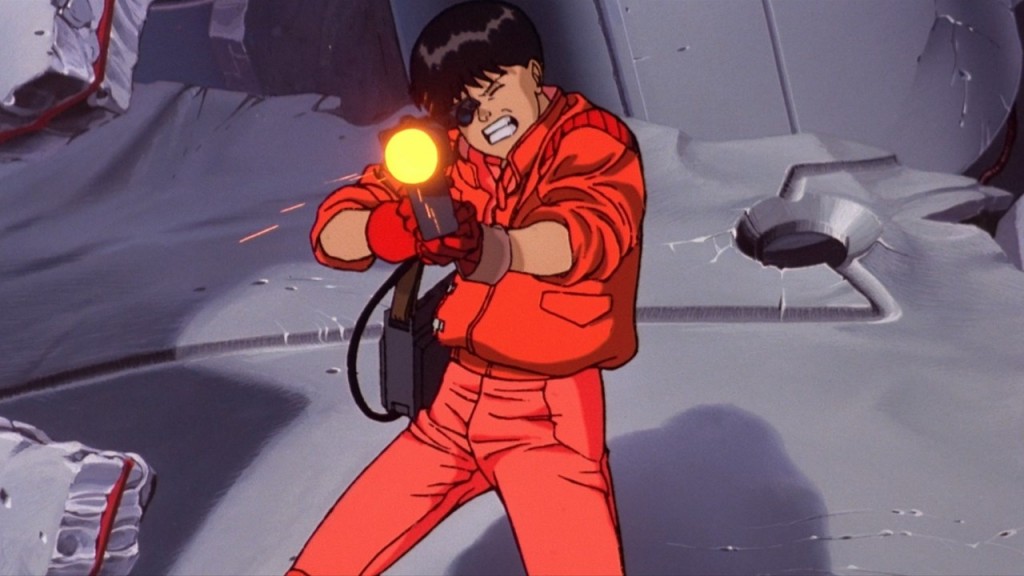 This anime movie came out in the 80s but it seems to have never aged. It tells the story of a biker gang that turns into an unstoppable group of psychopaths with weird powers when a secret government project called Akira puts Neo-Tokyo in danger. The two main characters of this anime- Tetsuo and Kaneda really start to grow on you, the more you watch this. But this anime may not be for everyone as from the starting itself it has an extremely strong language, an attempted rape and also a vicious bloody battle. The first few minutes of this will help you judge whether or not you have the stomach for this one. 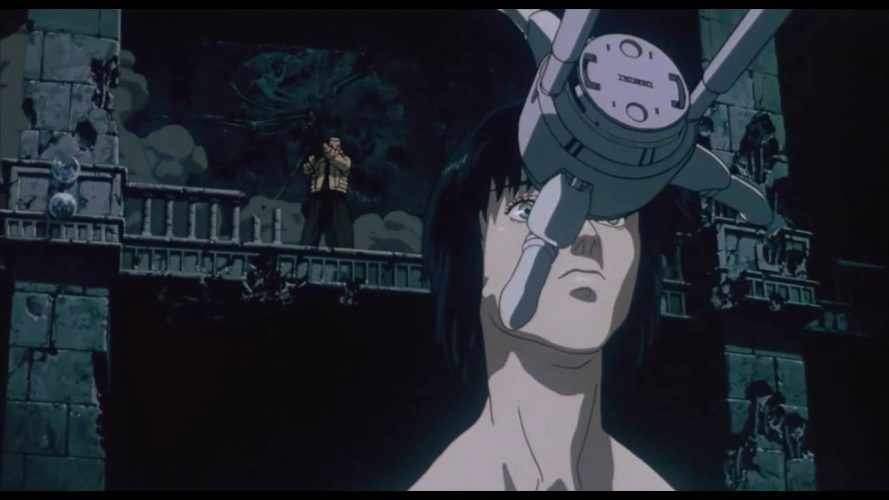 Based in the year 2029, technology has gone too far and humans have the ability to directly download date from the internet into their minds. Cyborgs too have become very common. When a hacker starts hacking the brains of cyborgs to make them commit felonies. Major Motoko has to track down the criminal who also goes by the name of the Puppet Master. This one has a lot of intense action and nudity but still manages to go deep within you. It sticks to you and stays with you long after you’re done watching it. It’s probably one of the best science fiction films you’ll ever see if only you don’t get offended by the graphic violence in it. 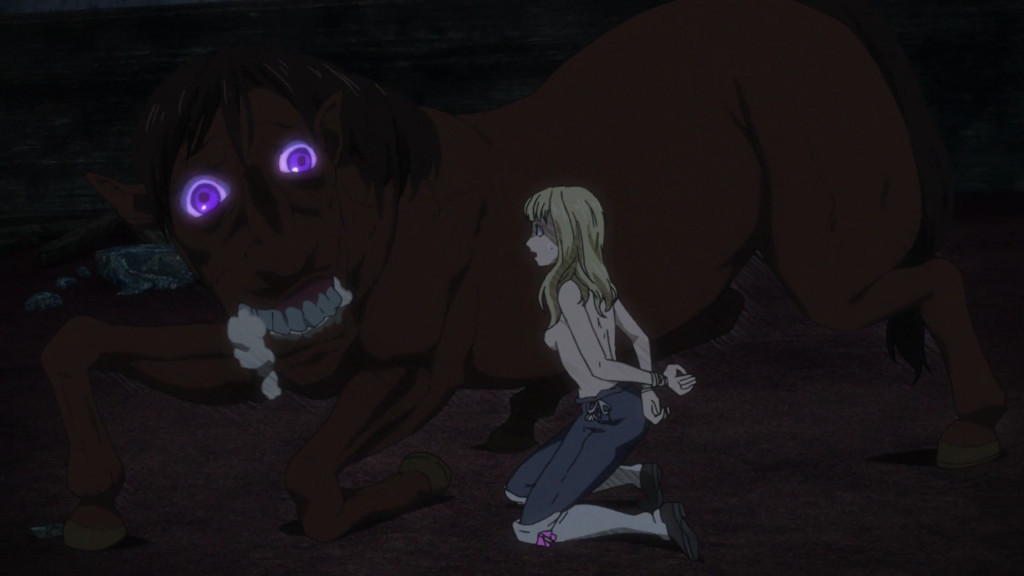 ‘Berserk‘ is the story of a man named Guts who during his childhood kills his guardian in an act of self-defense and runs away. Later he runs into Griffith who is the leader of a mercenary group called The Band of Hawk. Guts is then raised by this mercenary group and fights by their until they reach the top. But the view from the top doesn’t seem too great for them as things start to get really ugly. The show has the most intense and violent sex scenes that have most likely been used only for the purpose of getting attention. But that’s not it, it also has most bizarre blood splattering sword battles that give those battles a more than realistic feel. This is one is truly a great dark fantasy. 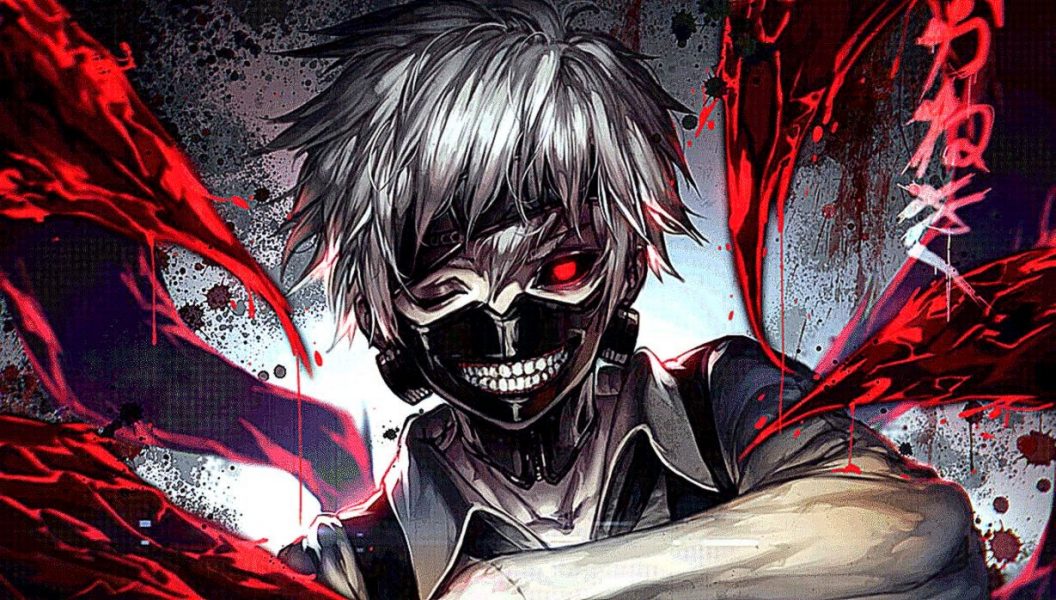 ‘Tokyo Ghoul‘ is a very gripping and dark anime about ghouls who target humans and eat their flesh. A Tokyo college student meets Rize, a girl who holds similar interests as him. Little does he know that she is a ghoul and is going to change his entire life overnight. This anime will keep you at the edge of your seat at all times. At times, it can get so dark and deep, you’ll be able to feel its impact even when you’re not watching it. 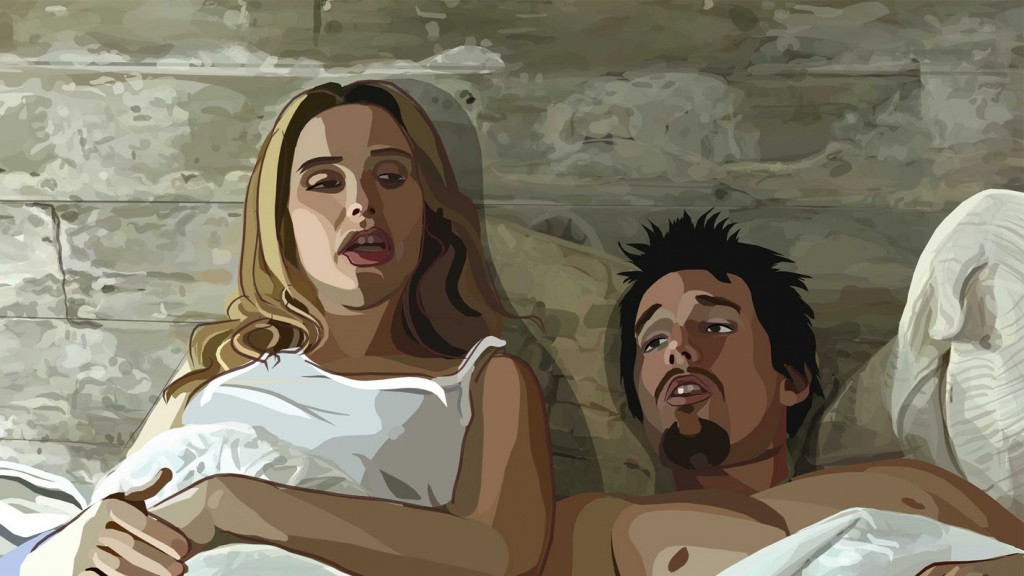 ‘Waking Life’ is a 2001 drama animated film that has been made in a very strange way depicting the story of a man who floats from one dream to another in the search of answers meeting different people and experiencing the most surreal things around him. This one does not really have any gore or R-rated scenes in it but it’s on this list because it will for sure blow your mind and will make you think every second you spend watching this. The movie is truly unique in its own way and projects philosophies that may be more appealing to the youth demographic in the strangest ways possible. 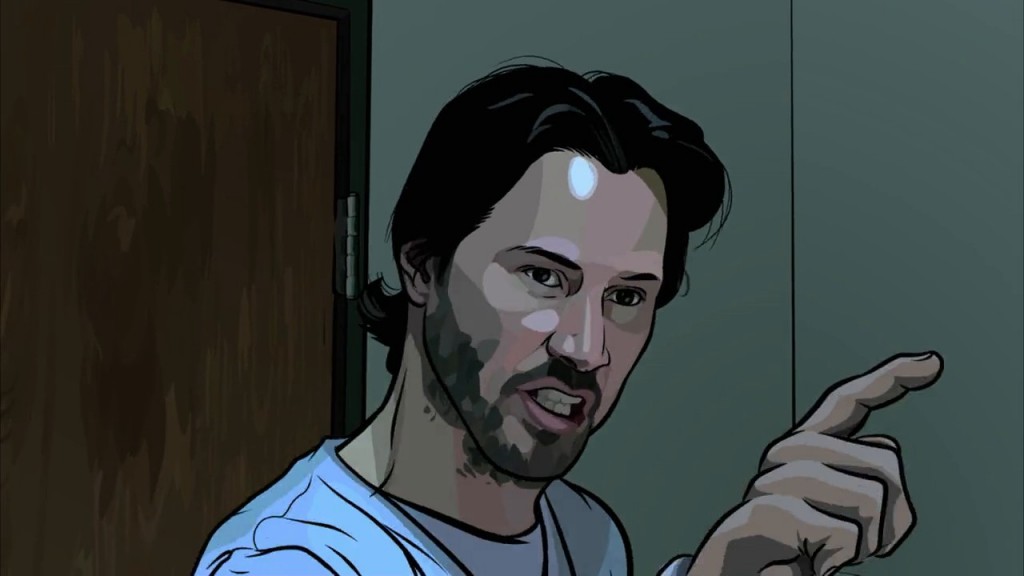 Starring Keanu Reeves, this one depicts the story of an undercover agent who becomes a drug addict and in the process starts to lose his own self-identity. As simple as the story may sound, the movie is much more complex and dark. The film also has its very own unique way of representing everything on an animated platform. Movies like this are truly rare and are gems in the genre of science fiction. If you want to watch something that’s beautiful in ways you won’t be able to understand, then go for this. 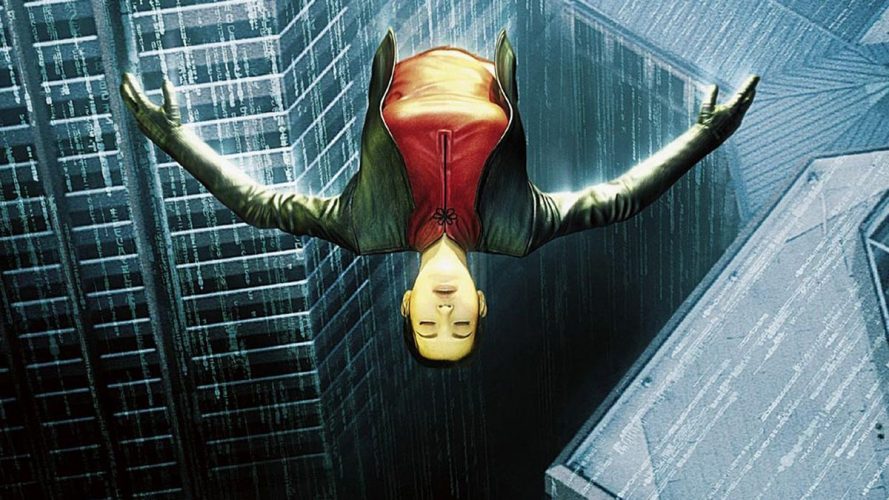 ‘The Animatrix’ is probably the closest we can get to ‘Love, Death and Robots’ and one big reason for that is that the movie was also an anthology of strange and graphic animated films just like ‘Love, Death, and Robots’. While ‘The Animatrix’ was more about the origins of the movie ‘Matrix‘ and revolved around how the war between man and machine led to the creation of the Matrix universe, ‘Love, Death and Robots’ will be more about human psychology, the government, human rights and other adult related social themes. Let’s hope that this one will at least be as good the movies on the list or even better.