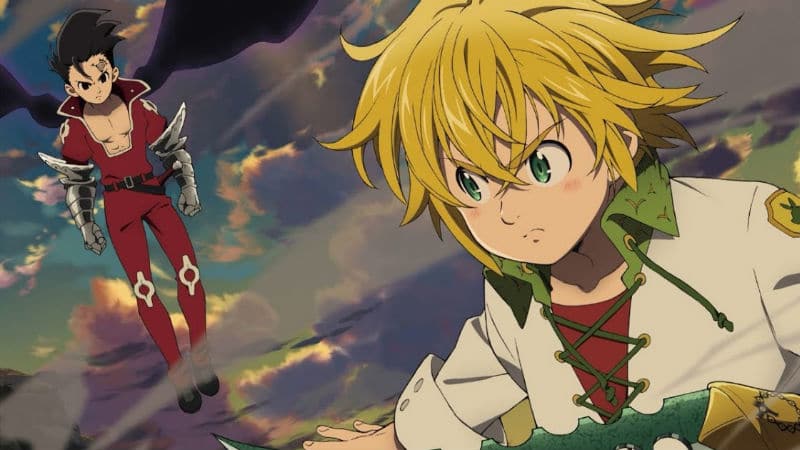 ‘Seven Deadly Sins: Revival of The Commandments’ is the actual title of season 2 of the original anime series that came out after a four-episode interlude called the ‘Signs of the Holy War’. It’s okay to even skip this tiny interlude and directly move to season 2, you will still be able to understand everything that’s going on. The plot of season 2 continues from where season 1 ends but we would still recommend you to just go through the four episode OVA because some character development leads are taken from it which will make sense much later. It also provides more insight into what Meliodas is and why some interactions between the characters have slightly changed since the first season.

Not too many fans have had issues with the first season and that’s probably the reason why the makers decided to keep most of it the same. The dead serious content, the subtle humor, deadly action sequences, emotions of crazy characters, all of it is still being maintained in this season. This also means that Meliodas is still trying to get inside Elizabeth’s pants at every opportunity he can get and this part of the series is downright unnecessary. The outfits of the female characters appear to be sexier now and they still don’t really make any difference. Fan service has never really been the prime focus of the show and has always been kept on the sidelines. This is one strong positive that has immensely benefited the show overall.

If you have been a ‘Dragon Ball Z‘ fan then you will notice that ‘Seven Deadly Sins’ offers a very similar production value. The character design and each of the battles between characters are clearly inspired by DBZ. The powering up during battles, training to level up and recovery after injuries, all are very similar to DBZ. Characters revive from the dead, former enemies become allies and a numerical power measuring device just like the scanner in ‘Dragon Ball Z.’ There is no doubt that DBZ is one of the best anime out there, especially when it comes to the action. With so many similarities that ‘Seven Deadly Sins’ shares with DBZ, it was always going to be a fun experience.

There is no doubt that ‘Seven Deadly Sins’ deserves the popularity that it has gained over the years but is there anything more to this show than just topnotch action sequences and aesthetic cool looking characters? Most “decent” anime series offer something very similar and have a baseline premise that is pretty much the same. The problem with it is that most of these long-standing franchises have already acquired so many fans that they stop feeling the need to improve and continue the same old cliched monotonous tone. Don’t get me wrong here! There’s nothing wrong with what ‘Seven Deadly Sins’ has been doing till date and it surely has its own merits. But my question is whether the creators are making any attempts to improve it or is it just going to remain the same even after five or six seasons? Keep reading to know more.

‘Seven Deadly Sins‘ Season 2 premiered on January 13, 2018, and ran till June 30, 2018. It is speculated that the new season of the anime will come out in 2020 but Netflix hasn’t yet given a thumbs up yet. You can find the full details about Seven Deadly Sins season 4 right here.

‘Seven Deadly Sins’ is the story of a group of powerful warriors who have been framed for the death of the Holy Knight Zaratras. The warriors are being chased by The Holy Knights and can do nothing but hide to save themselves from getting executed. They have been portrayed as fugitives almost all along the first season until they manage to save the Kingdom of Liones from demons and Holy Knights, who have the power to summon the strongest demons ever walked on the face of the Earth. Somewhere around here, the first season ends and season two starts picking up.

The second season starts with Hendrickson releasing a strong powerful force after he breaks the seal of the coffin of darkness. He does this in order to restore the long lost “Tens Commandments”. The premise of the entire second season relies on these commandments and a brief introduction to these is given in a four-episode interlude right before this season. It’s ok if you skipped the interlude because the second season starts off fresh and only continues from the first season, not the interlude. The antagonists hold a lot more power than we have ever known in the previous season and this becomes a matter of grave concern for the protagonists. This is where the second season gets interesting because it focuses more on the growth of each character.

The anime detracts slightly from the plot of the manga but overall it still sticks with the original source. It also focuses a lot on the backstory of the main characters with more emphasis on the character development of Meliodas. In a lot of battles against the Ten Commandments, Meliodas could’ve easily defeated the weaker members of the opposition, but his “Revenge Collider” is stopped by Estrossa who is the commandment of love. It is great to see Melodias receiving the much-deserved spotlight in this season and his epic moments are hard to forget.

The major highlight of this season, though, is the introduction of a whole new character named Escanor, the last of the “deadly sins” who is by far one of the strongest characters in the series yet. Towards the end, Escanor also fights with one of the members of the ten commandments named Estarossa and manages to defeat him. Some aspects of the plot and even characters are left hanging by the end of the season but that only peaks the excitement and curiosity of fans for the next season.

When it comes to the story of this show, we are certain that most people don’t even care about it. The plot is predictable most of the times. Many other anime of the same genre offer something very similar in terms of story structure. The show is clearly made for a younger audience so pinpointing flaws in the storyline is slightly unfair. But despite all its cliches, the writing of this is undeniable smart because it does not rely on typical action-anime situations like power-ups and friends showing up to save the day. Such story troupes are found in the best of anime shows ,like ‘Fullmetal Alchemist Brotherhood’ but not in this one. Even the dramatical subplots that revolve around the romance and friendships of the characters have been smartly written and do manage to intrigue you.

The music for the show has been composed by Hiroyuki Sawano. The soundtrack is great, but it is a little disappointing to see that most of them are just rehashed versions of the music from the previous seasons. The theme songs of this season are dull compared to the previous one and are a lot less impactful. The character voice mannerism is something that is very impressive in ‘The Seven Deadly Sins’ and clearly reflects the personality of the characters in the exact way that it should .When it comes to the Ten Commandments and other characters such as Escannor, their voices stand out completely and makes them look like the badass characters they are supposed to be.

Getting to the art and animation of this anime, a lot of budget cutting is noticeable in scenes that are less important and by less important I mean the scenes that do not have much action in them. This is a little off-putting but the impeccable action scenes more than make up for those shortcomings. The awesome fight scenes are the reason why the cliched plot of the show is often ignored.

One other strength of the anime is how well some of the characters have been developed. Two that immediately comes to mind are Galland, Escannor and of course Meliodas. As for the other characters, it is disappointing to see that not much has been done to develop them for the future. But somehow the show still manages to get by with the three main characters all of whom have quite an impactful presence on the screen. Escannor can be clearly seen as the manliest character ever made and his whole badass vibe is enough to carry you to the end of every episode in which he is present. Do you remember Hisoka from the shonen anime ‘Hunter X Hunter’? Well, Escannor here is pretty much as interesting as Hisoka here in ‘Seven Deadly Sins’.

Overall. we can easily say that season two is extremely enjoyable if only one looks past the storyline and focuses more on other aspects of the show. The second season has its own flaws and downfalls but at least 70% of the times it manages to be super enjoyable. On a scale of 1 to 10, I would rate the second season of ‘Seven Deadly Sins’ a solid 7.5. While watching this season you will surely go through bundles of emotions, you will remain amazed and entertained for most of its running time.

The English Dub version of ‘Seven Deadly Sins’ Season 2 is available on none other than our very own online streaming website Netflix. Enjoy!