It is not uncommon for a film to be remembered more popularly years after its initial release, or more correctly, etched in the mind of its viewers courtesy of that one scene. The scene could be impactful, dramatically or otherwise, provocative, unexpected, shocking, grisly, or exceedingly funny in a manner that you did not anticipate or see coming. However, fewer among them achieve the status of the scene becoming the identity of the film altogether.

By the merit in that argument, you are plainly lying if a cross legged Sharon Stone seated in that black leather chair does not appear in your mind before you deliberately try to switch over to one of the less memorable scenes from the film, whenever I mention Paul Verhoeven’s sensuous murder mystery ‘Basic Instinct’. Need a testament to what I am saying? Here it is. Type the film’s name on the Google search bar and the first ten images that appear are from the scene. Major keywords in the search term suggestions include “interrogation”, “legs”, Catherine”, “flash” and “cross”. Every single major channel on Youtube lists the official trailer of the film with this shot as the cover image.

As a matter of fact, coming to the ever belligerent viewer, even you have forgotten what the actual poster of the film looks like. Such is the power of the scene; and I have absolutely no doubts that in the times to follow, this one scene will also be the film’s legacy. Without a doubt, the single most paused scene in movie history, Sharon Stone’s interrogation scene in the film came to ‘posterise’ the film in a way I have rarely seen any single shot or scene do to a film in recent times.

‘Basic Instinct’ was itself a mildly entertaining thriller in my opinion, with clearly under-running themes of eroticism and sensuality. However, despite that, and despite the film clearly involving at least two explicit love making scenes featuring both female and male nudity, it was a partially obscured, momentary glimpse of a woman’s vulva that caught the fancy of the audience, and drove well over a quarter of the world crazy. It is almost hysterical, categorically even funny if you think about the hysteria itself, but also psychologically perplexing and bewildering if you ask me, the reason what pressed people to go back to the scene in insane numbers, even pause and stay, leading it to acquiring the status that it has today.

Even personally so, whatever you may consider the scene to be: shocking, provocative, powerful, empowering, or distasteful, something even remotely along those lines is often accompanied with controversy, and this scene and the film, are no exception to that. We will dive into the controversy later, but what I am currently more interested in is to decode what exactly is it that caught the fancy of an audience even half a world across, that something clearly more explicit or readily available couldn’t. Ironically enough, the best way to do that was to watch the scene a mind numbingly enough number of times. In the sections that follow, I have tried to list out my findings and more about the controversy. Read on.

Description of the Scene 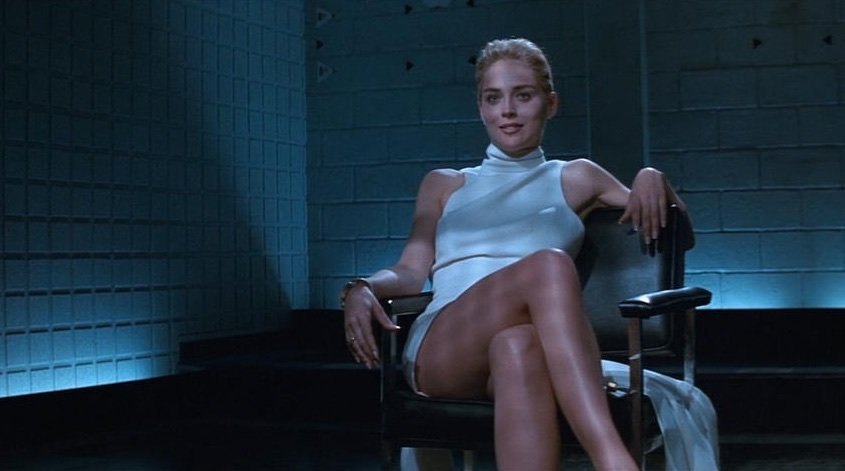 A retired rockstar Johnny Boz is murdered during sex by stabbing with an ice pick by a mysterious (and absconding) blonde woman. Investigating agent Detective Nick Curran considers Boz’s then girlfriend, Catherine Tramell as the only serious suspect in the case, especially given her crime novel that completely and eerily mirrors the murder. Also considering where the plot of the whodunit is headed, the infamous interrogation scene occurs early on into the film, when Catherine Tramell is called over for interrogation by a group of five detectives who try to coax a confession out of her, but end up sweating through the interrogation with their mouths on the floor. I am squarely going to keep the conversation centred on the outcome of the interrogation scene even though we all know what conspires in the movie, and who in actuality committed the murders.

Catherine Tramell casually walks into the interrogation room and owns the scene and the room from the word go, confidently claiming that she had nothing to hide, which as we later get to know is meant quite literally. Her first act of defiance among seemingly many is when she lights up a cigarette despite being told not to. The first line of questioning directed towards her is with respect to her relationship with Mr. Boz, to which she casually replies that she had sex with him for the past couple of months, even going on to explicitly describe how he used to pleasure her, immediately establishing her as the in-command in a room full of men.

Tramell talks like she has nothing held back and owns every word of what she says, however explicit or immoral including claims of sadomasochism or the consumption of narcotics, making the men uncomfortable with her level of confidence and eventually swaying the interrogation in her favour. The camera, during all of this, repeatedly pans across the men’s faces to capture the sheer range of the reactions that they display: including shock, visible discomfort, confusion and even lust.

When directly confronted with the question of whether she had killed him or not, she dismissively scoffs at Nick for claiming that she did in the same way as she wrote in her book, after having written it. In a rebuttal, she even accepts that writing about it would be a fine alibi for her. In this instant, in an almost playful manner, she toys with the minds of the interrogating officers in the room, mildly taunting them, almost as if to provoke them, never once herself losing the wintery calm in her voice: sultry but not overdone. Kudos to Sharon Stone for that.

While the entire interrogation scene and her open and confident depiction of her sexuality, desires and what pleased her are what stirred up the dialogue and controversy in the first place, the primary cause, the most paused on screen instance in movie history, would still be that one brief incident of exposure by Stone, roughly 3 minutes into the scene.

Upon being questioned about her use of narcotics, Tramell calmly replies in the positive, confessing to doing cocaine openly. She looks at Nick directly and questions if he had ever “f**ked on cocaine”. She then goes on to uncross her legs, revealing that she had gone full commando, accompanied by a brief close-up of her pelvic area and a blink-and-you-miss-it shot of the pubic region, before she goes on to cross her legs in the opposite direction. So, there it is — the most paused moment in the history of film. In this one moment in the film, I hardly think that the investigating officers in the room would have been able to think about anything else, leave alone the investigation or Tramell being a prime suspect. What follows is another short bit of cross questioning only to be trumped by Catherine at every instance, followed by her taking a polygraph test that proves to be unsuccessful. 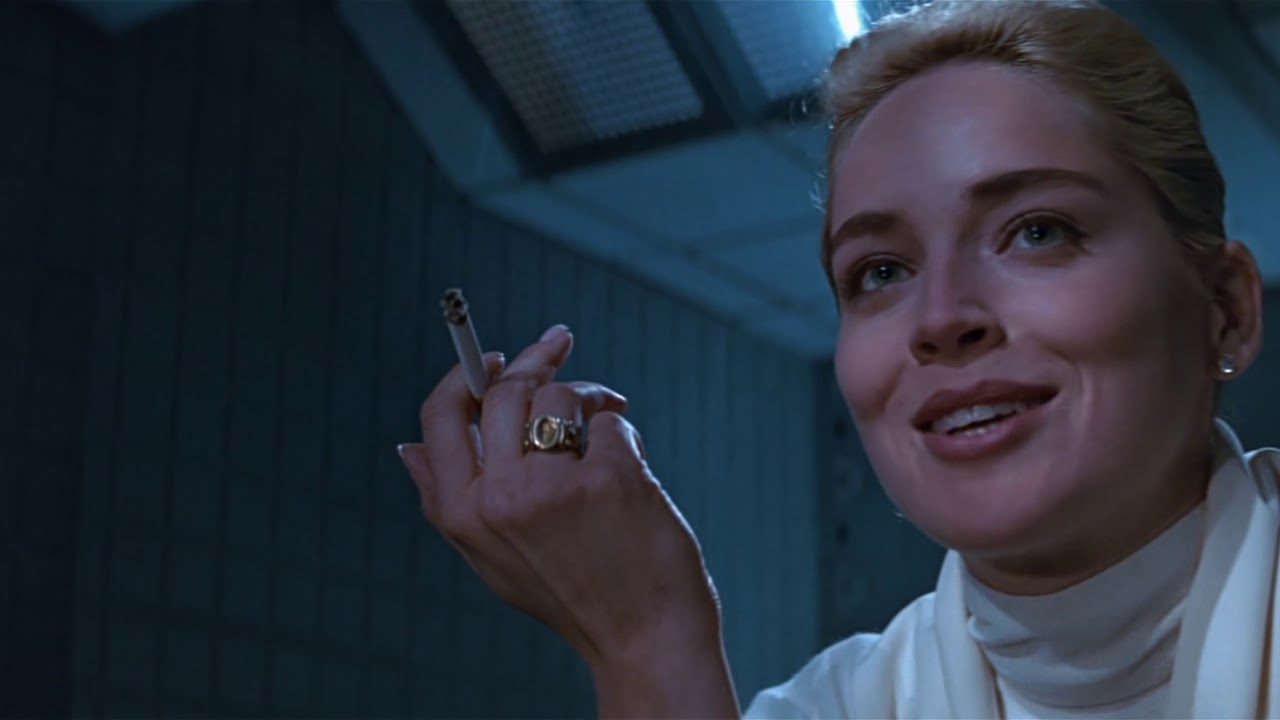 Stories behind iconic scenes like such are always interesting or crazy, or both, and the legend lives up to its name in the case of the exposure scene in ‘Basic Instinct’ too. To begin with the conversation on this, I will start with a short excerpt from Joe Eszterhas’ actual screenplay for ‘Basic Instinct’. The excerpt intentionally pertains to that one scene in question.

INT. THE INTERROGATION ROOM
It is large, fluorescent-lighted, antiseptic. She walks in with Nick and Gus.  In the room are prosecutor John Corrigan, Lt. Walker, Captain Talcott, Harrigan, and Andrews. There is a police stenographer, a plain young woman in her 20’s.

GUS: Do you use drugs, Ms. Tramell?
CATHERINE: Sometimes.
HARRIGAN: Did you ever do drugs with Mr. Boz?
CATHERINE: Sure.
GUS: What kind of drugs?
CATHERINE: Cocaine.

[She looks directly at Nick.]

CATHERINE: Have you ever fucked on cocaine?
[she smiles]

While the dialogue is mostly intact, what you’d find rather odd is that the screenplay penned by Eszterhas doesn’t for once mention Stone’s exposure: the one scene that multiplied the intensity, meaning and significance of this entire sequence. So, if you are thinking that the scene was thought of later, you are probably right. Director Paul Verhoeven remembered a girl he met at a party years ago who had gone visibly commando under her dress, and had a sense of rare confidence about it. Upon being confronted with that, she replied that is precisely why she was doing it. This is where Verhoeven conjured up the idea for that scene, and convinced Sharon Stone to do it in the absence of her male co-stars, none of whom were present in the room when this particular scene was shot, with their jaw dropping reactions being recorded separately.

Of the scene itself, Verhoeven adds that “She is victorious. She used sexuality to defend herself. And attack – it made them into drooling males.” A substantial part of the controversy also stirred up when Stone confessed to regretting doing that scene, and said that she was misled into doing it that way. The director of course dismissed any such claims, rebuffing that it was impossible to actually take that shot without somebody knowing, and that she had known the full extent of the scene and was taken into confidence prior to the shoot.

The Brave and the Bold

With all the explanations on one side, let’s get into how Verhoeven and Stone’s murderous femme fatale toyed with our minds with this one scene. When the director claims, as do various other sources of interpretation, that Stone as Catherine Tramell was in complete control of the whole sequence and situation, carefully dodging any line of questioning directed at her or framing her in the murder, they could also quite possibly mean the audience as well. Her cold enigma in the scene alone is enough to hold your attention: that really is no big deal given all that we have heard of Sharon Stone’s performance in general. It is what she delivers while you are completely captivated that catches you off guard, and the sheer audacity of that dazzles you to an extent that you miss being observant of what she wished to show. THAT is what made you pause and go back.

In my opinion, it wasn’t the perversion, which is also the easiest answer (also true for some), that caused so many viewers to pause the scene at that one moment. It was curiosity. Technically speaking, if you would believe, the brief glimpse that is so talked about and is the 90s equivalent of “breaking the internet” is only a sixth of a second in duration, lasting for four frames.

A couple of astute observers (with access to HD and a lot of free time) have also claimed that Stone didn’t go completely commando for the scene: she was wearing skin coloured clothing underneath. Similar to how Tramell taunted and played with the minds of the officers in the room, Verhoeven plays with the curiosity monster in you. Come to look at it, that one shot is extremely brief and quickly obscured to the degree of being, well, nothing at all. The hullabaloo around it was simply that: a curiosity over not seeing something that you thought you did or were supposed to, but was actually never intended to be seen in its completeness. As for the controversy itself, I cannot say that I have the answer, but do you know when I seemed to get close to it? I paused too.