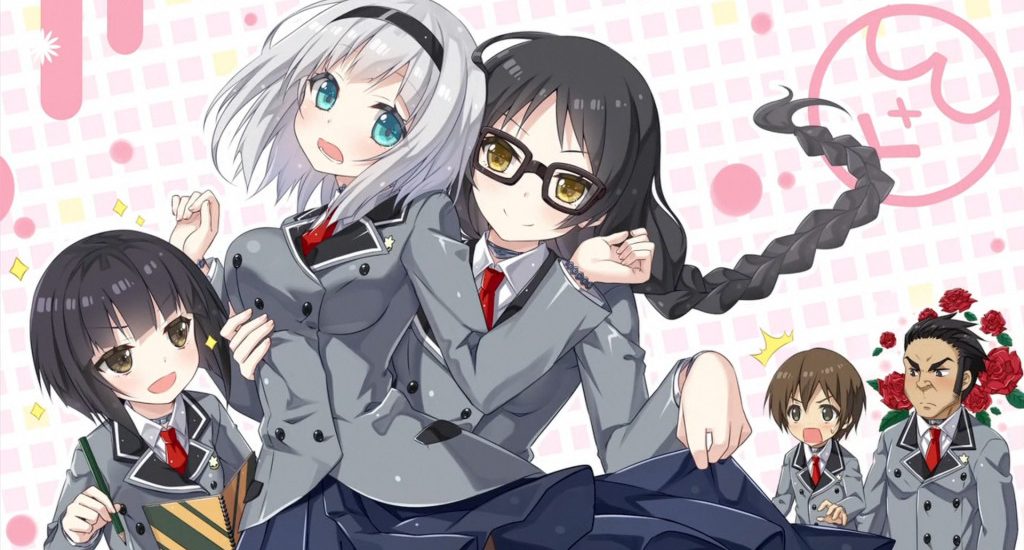 ‘Shimoneta’, also known as ‘Shimoseka’ or ‘Shimoneta to Iu Gainen ga Sonzai Shinai Taikutsu na Sekai’ in Japan, literally translates to ‘Shimoneta: A Boring World Where the Concept of Dirty Jokes Doesn’t Exist’. So it is quite easy to understand the premise of the anime from the very title itself. It is based on a light novel series written by Japanese author Hirotaka Akagi, illustrated by Eito Shimotsuki and was later published by Shogakukan as 9 complete volumes since the year 2012. Soon after in the year 2014, a manga adaptation began printing as a part of Mag Garden’s shōnen manga magazine ‘Monthly Comic Blade’. Due to the popularity of the series, an anime adaptation began airing in the year 2015 under the production of J.C.Staff, an independent Japanese studio. It successfully aired 12 episodes from July 2015 to September 2015, which is the anime’s first season.

Shimoneta Season 2 Release Date: When will it premiere?

Shimoneta season 1 premiered on Jul 4, 2015 and ended its run on Sep 19, 2015. While there have been no official announcements yet, there are several rumors about a sequel being in development. We cannot confirm any of the claims but going by the popularity of the first season, we can definitely expect another season pretty soon. There is a lot more to the storyline than what has been explored in the first season, so there’s no reason that the anime will be dropped. Our best guess is that Shimoneta season 2 release date could fall sometime in 2021. We will update this section as soon as we hear more.

Shimoneta is licensed by Madman Entertainment in Australia and New Zealand, which simultaneously cast the series on AnimeLab. The English dub and sub versions can presently be streamed on Funimation, Crunchyroll, and AnimeLab.

In a dystopian alternate Japan, the government has put up certain restrictions on public opinion and communication. What started as an effort to curb the distribution of questionable materials in the country and a strike on violence has now completely rendered the entire population of the country under the strict eyes of the government. The authorities now pry on every single action taken by the people of the state and if they curse another citizen, they are instantly arrested and taken to the court. Any immoral activity may lead to such actions taken by the government, may it be something petty like a casual joke or distribution of lewd materials that are deemed as illegal.

In addition to this, every citizen in the country is forced to wear a ‘Peace Maker’ device that monitors their activities. These are designed to alert security officials, who arrive quickly to the point of interest, if suspicious activities are detected. These are extremely high tech devices that have the ability to register and decode the human voice, enabling it to understand each and every work spoken by its user. It also has the ability to monitor hand gestures and interactions taking place between individuals so as to ascertain that they are not taking part in any illegal activities. Needless to say, this is a violation of basic human rights and the right to freedom, both of which are dying concepts in the new world.

There have been attempts at defying the government, some critical to the overall operation and some quite defunct at best. Yet, there is hope as news of people trying hard to break free from the very strands of the government surfaces each day. Some of them are extinguished quickly but some are more notorious for their ability to come back and haunt the institution. It seems all is lost and people are to toil under the very fabric of anarchy for the better half of their lives for the foreseeable future. This is when Tanukichi Okuma enters the mix. A strong vibrant character and obviously the protagonist of the story, he quickly makes his voice heard when he joins a ‘public morals school’ as a high school student to reunite with his long time love, Anna.

However, the policies of the government are a real threat to Tanukichi’s plans and therefore, he starts planning ways to disrupt it to benefit his desires. Things quickly take a turn for the worse when he finds himself getting more and more acquainted with ‘Blue Snow’, an intriguing woman who lusts for him and also teaches him ways to beat the law. This is where things heat up, leading to some dangerous yet hilarious incidents where the characters all try to deceive the government in order to take part in increasing vulgar activities. It is extremely amusing to watch them try and outdo each other while also outdoing the government, and we definitely feel that a 12 episode long season does not do justice to the anime.

‘Shimoneta’ itself literally translates to ‘vulgar slang’ or a ‘dirty joke’ and it is not difficult to understand why the author chose this exact title. It is a classic case of wanting what you cannot have. On a seemingly normal day, one wouldn’t miss the ability to curse or take part in questionable activities but once these are limited, it somehow escalates the desire for them as well. A dirty joke has a lot more meaning and depth when it is looked down upon by the society, when it is illegal. Somehow the idea of breaking the law has always intrigued us as humans and hence, a notably boring task like telling a dirty joke becomes interesting when the ability is taken away from us. This seems to be one of the moral clauses that the anime seems to toy with at every step and we think this is something we should discuss.

Tanukichi Okuma: He is the son of the infamous terrorist Zenjuro, who was caught distributing condoms in front of the Diet Building as a form of protest to the government. Tanukichi Okuma is the ultimate master of lewd and sexual behavior. He developed an early interest in the arts of sexual activities as a child from his father. Well, having a father who distributed condoms as a form of protest in front of one of the most important political buildings in all of Japan calls for some bragging rights at least and hence, we are not judging his low moral conditions when he completed intermediate education. Anna is his childhood friend and crush and she’s a morally perfect character. Tanukichi is forced to conceal his ways of unmoral behavior from her in order to win her over, However, as soon as he enters the school, he comes in contact with Ayame, and things become even more complicated. He is constantly torn between the two girls and faces a dilemma of turning in Ayame to Anna, but cannot really commit to it.

Ayame Kajou: Ayame Kajou is a rebel and the daughter of a disgraced Diet officer who unsuccessfully campaigned against the public morality laws and was eventually thrown out. Due to this, she is also adept with the ways of unmoral behavior and longs for a day when the anti-profanity laws will be lifted by the government. She works tirelessly to promote her tactics by campaigning outside of the school against the laws under the moniker of ‘Blue Snow’. Here, she manages to hide her identity by putting on panties on her face and then indulging in several activities against the government. She also happens to be the vice president of the Student Council in school, where the rest of the members have no clue of her double life.

After coming in contact with Tanukichi, Ayame decides to form the group SOX with him as an attempt to further their causes against the government. It seems like she develops a soft spot for Tanukichi, as she can sometimes be seen blushing when she’s alone with him. Her father, being the infamous rebel that he was, taught her how to disable her PM device for three minutes each day, allowing her to take part in any kind of lewd activity as she pleases. This becomes extremely handy to her and she can be seen distributing pornographic material and shouting dirty jokes while taking full advantage of it.

Anna Nishikinomiya: Anna is Tanukichi’s childhood crush, who also happens to be the president of the Student Council. Being an extremely well behaved and law abiding citizen, she has taken it upon herself to reveal the identity of Blue Snow before the reputation of the entire institution is tarnished. In order to turn this fact into reality, she has tasked Tanukichi with finding out the identity of the Blue Snow. However, little does she know that Tanukichi himself is working closely with Blue Snow in order to fight against the anti-profanity laws. They have even formed the group known as SOX, which is a front for all questionable behaviors imaginable.

Anna later falls in love with Tanukichi after he accidentally kisses her but fails to convey her feelings in an appropriate manner since she has little idea about sexual drives. She ends up forcing him to indulge in sexual activities with her since she is unable to control her desires and channel them accordingly while threatening everyone else who even comes close to Tanukichi. In an attempt to win him over, she tightens security with the hope of wooing him through moralistic and good behavior but this backfires. She can be quite motivated and dexterous when she wants to be but fails to utilize her skills appropriately, mainly because she loses her wits when faced with a tough situation.

Otome Saotome: Otome is a very interesting character to say the least. She is an artistic prodigy who has her paintings displayed all over school, yet feels unmotivated and is hardly moved by popularity. One would think that being one of the most popular girls in school will hold some meaning, but not for Otome. She is not only unperturbed by all the attention given to her, but it even seems like she is bored. However, one day she finds Tanukichi changing out the SOX Blue Snow uniform and goes on to blackmail him to make him her pet. But she soon gets bored of this too and joins the SOX in order to learn to paint nude art. Due to the PM machine that constantly tracks her hand movements and gestures, she learns to paint with her mouth in order to fool the device.