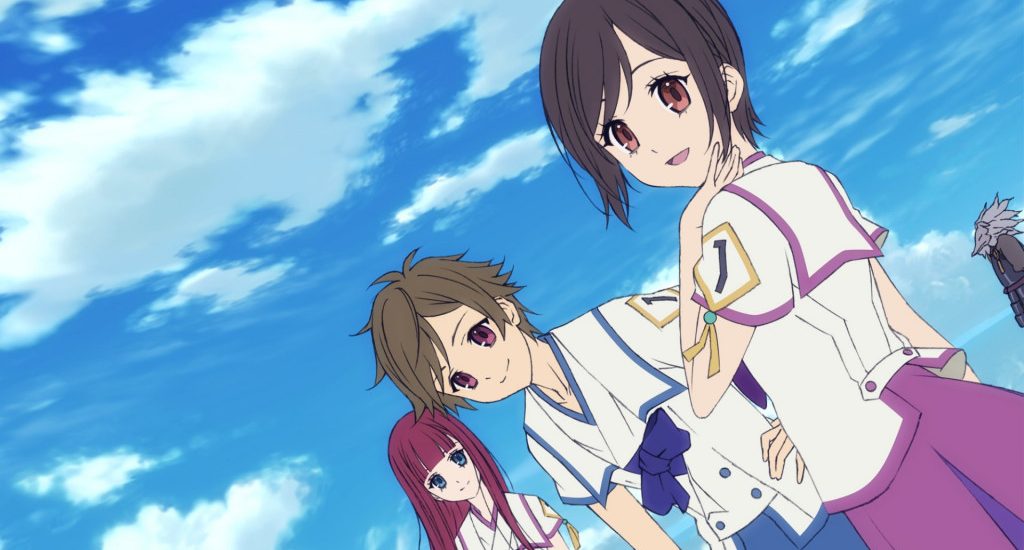 Most anime shows set in the dystopian future have more of a cyberpunk feel to them where future societies are portrayed in the most “hi-tech” way possible; take ‘Psycho-Pass‘ as an example. But ‘Shin Sekai Yori’ is just so different from all of these as it presents a rather pleasantly old-fashioned look at a dystopian world that exceptionally remarkable in its own way. In fact, if the writer of the story ever made claims that he is actually from the future, I would not even be surprised. The show starts off a little slow but somewhere around the fourth episode, it starts to unfold its true nature and that’s when you’re reeled right in.

A-1 Pictures Studio is mostly known for shows like ‘Sword Art Online‘ and ‘Fairly Tail‘ and one thing they have always excelled at is their depiction of detailed and unique backgrounds. Here again, the overall animation is way above mediocre and the backgrounds are just stunning. Overall, ‘Shin Sekai Yori’ is one of those anime shows that do not come by too often, but when they do, they leave their impact in the world of anime and in a way, become pioneers of their genre. With that being said, this anime is not for everyone but all sci-fi horror fans should give it a try at least once.

From the New World Season 2 Release Date: When will it premiere?

‘Shin Sekai Yori’ season 1 premiered on September 29, 2012 and came to an end on March 23, 2013. During this span, it aired a total of 25 episodes with each one of them being 22 minutes long. The anime was very popular soon after its release and its ratings show how amazingly most fans had received it. The chances of getting a season 2 seem very low as in its runtime of 25 episodes, the anime covers pretty much everything that its source material has to offer.

There are certain parts of the 950-page novel that have not been covered in the anime but that’s understandable because the creators have their own time constraints. We can possibly have a new season of the anime if the author of the novel decides to publish more material. But now that it has been over a decade since the release of the source material, it seems obvious that the author has no intention of going back to it. So as of now, we don’t think ‘Shin Sekai Yori’ will ever have a new season but if in the future, there is any news regarding ‘Shin Sekai Yori’ season 2 we will surely update it here in this section.

From the New World English Dub:

You can watch ‘From the New World’ on Crunchyroll with its original Japanese audio and English subtitles.

From the New World Plot:

The plot of ‘Shin Sekai Yori’ revolves around Saki Watanabe, a young girl who is troubled as her psychic powers are not developing according to age. It is set in the city of Kamisu 66, where people of her age are expected to possess psychic powers. Once the child develops these psychic powers, they are then sent to special schools where they are taught how to harness and control them in order to put them to everyday use. It is important to note that in this timeline, the human realm is not shown to possess these psychic powers as a part of their traits but develops it over the course of time. It is shown that nearly a thousand years prior to the events portrayed in the anime, a small percentage of the human population developed these powers and started using it to their advantage. It was the year 2013, and about 0.3% of the population developed these powers and all hell broke loose. People were using it to manipulate others, steal, rob, commit crimes and murders and society as people know it, quickly descended into chaos. Several orders and laws were established but it was impossible to contain the power of these individuals, and soon a world war followed destroying most of the population.

The people who survived lived under the fear of being overwhelmed by these superhumans and started forming small feudal colonies in order to defend themselves. These two quickly fell under their wrath at which point these humans started realizing the actual consequences of their actions. They unanimously decided that they were going to make an active effort to rebuild society and find a way to suppress their powers. They finally decided that they were going to alter their own genes and insert a fail-safe strand which will prevent them from losing control of their powers and accidentally killing or taking advantage of others around them. If anyone did happen to lose control and kill someone in the process, this mechanism will activate instantly shutting down their organs and killing them.

Soon human civilization rose from the ashes and matured leading to the events portrayed in the anime. Here, humans have now evolved to gain access to these powers anyway but the attack inhibition gene prevents them from accidentally harming someone. In fact, as stated earlier, Saki is quite tensed about the fact that the powers have not manifested itself despite her being of age. However, at the age of 12, she finally gains her powers and is sent off to the special school where her friends were already studying since their powers had awakened before her. Quite relieved that the powers have finally awakened in her, she joins everyone at the special school but somehow Reiko, one of her friends who was having trouble awakening her full powers, suddenly disappears from the institution. The next day, the person she defeats in a psychic match also mysteriously disappears from the school. She is quite flabbergasted by the disappearances but decides to think no more about it.

Reiko is soon forgotten in the rush of the matters that take them over the following couple of weeks, and so is the girl that Saki defeated. No one speaks about it anymore and the group can be seen going on a field trip together happily chatting and discussing balloon dogs, a mythical creature that supposedly blows itself up, with no mention about Reiko, one of their closest friends. This does seem extremely odd given the fact that no one is even mentioning the disappearance of one of their close classmates and is happily trotting about discussing mythical creatures. However, the tone of the discussion soon shifts and they start talking about the legendary Minoshiro, another mythical creature that brings death to anyone who happens to cross their path. The group suddenly has this weird idea to explore and learn more about the Minoshiro and therefore sneak out to find the creature and capture it. They eventually manage to locate the creature using their psychic powers but just when they are about to capture the creature, it starts speaking to them.

The Minoshiro start telling them about the actual history of the world and about the many generations that were destroyed before them so that stability could finally be attained. It also tells them about the tragedies brought forth by the misuse of these psychokinetic powers and was also about to reveal the truth behind their institution as well when a monk intervenes just in time to take the creature out. The monk threatens the children and seals their powers for collaborating with a demon but the children knowing that they were on to something starts looking for ways to escape. They must now learn and uncover the secrets and the truth behind the existence of present-day society so that they are finally able to free themselves of the burdens imposed by it.

From the New World Characters:

Saki Watanabe: The main protagonist of the show and a 12-year-old child, Saki is late to receive her psychic powers that delay her entry into the special school. However, she does receive her powers eventually and heads off to the institution in order to learn how to harness her powers. After noticing strange disappearances around her and learning about the truth behind her powers, she strives to uncover the secrets of the institution and their seemingly harmless propaganda.

Satoru Asahina: Voiced by Yūki Kaji in the Japanese version and by Greg Ayres in the English adaptation, Satoru is a mischievous and cunning young boy who likes to argue with Saki. He also possesses several telekinetic powers which he controls with overwhelming mastery, creating several illusions that are critical in their fights, as revealed in the battle against the Monster Rats. He later becomes Saki’s husband after dating her for a considerable amount of time.

Shun Aonuma: Shun is an extremely intelligent young boy who is often regarded as the most powerful psychic among their group. He as a very active mind and is able to find his way out of any situation quite easily. He later loses control over his telekinetic powers which turns him into a karmic demon. He has always displayed a soft side for Saki but has always eluded his feelings due to the fear of being unable to control his powers. He later guides Saki in making critical decisions during the climax of the storyline.

Maria Akizuki: Another active child in the group, Maria has always had a soft corner for Saki and wanted to date her from the very beginning of the story. However, her feelings shift after she meets Mamoru and the two eventually start dating. She is extremely gifted in the power of levitation, being able to lift up and carry heavy objects with ease. Maria later joins Mamoru when he decides to leave the group. It is later revealed that Maria was pregnant with Mamoru’s child.

Mamoru Itō: The shyest in the group, Mamoru has a hard time developing his psychic powers. After learning that the institution is planning to throw him out because of the aforementioned fact, he decides to run away himself saving him the embarrassment. He also has a crush in Maria right from the time the two met, and it is later revealed that the couple even has a child together.