10 TV Shows You Must Watch if You Love Big Hero 6: The Series 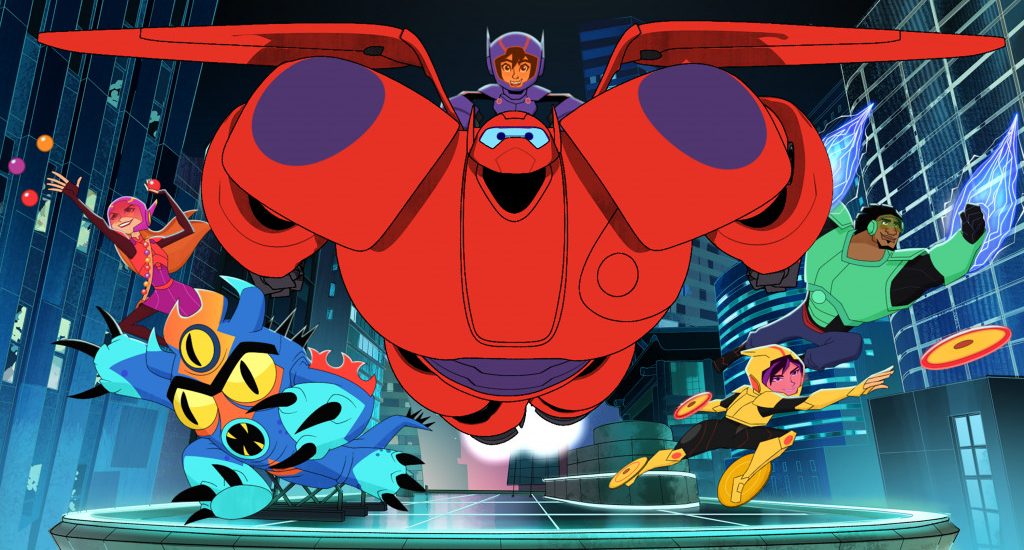 Created by Mark McCorkle and Bob Schooley, ‘Big Hero 6: The Series’ is a Disney animated superhero show, adapted from the original Disney movie, ‘Big Hero 6’, which is again inspired by the eponymous Marvel Comics franchise. The show is a prequel to the film. It chronicles the adventures of a tech geek, the 14-year-old Hiro Hamada, and his robot partner Baymax, which was made by Hiro’s deceased brother Tadashi. Apart from these two, the Big Hero 6 superhero team comprises Wasabi, Honey Lemon, Go-Go, and Fred. The show follows the crew as they embark on multiple high-tech adventures to protect their city from equally technically advanced anti-heroes. It also gives us glimpses into Hiro’s struggles pertaining to academics and social life, as he attends the San Fransokyo Institute of Technology (SFIT).

There are certain discontinuities in the events depicted in the series, as compared to the film. For example: Aunt Cass now knows about Baymax; the Big Hero 6’s team identities are still a public secret; and Hiro goes back to SFIT like everything is back to normal. You can watch the series on Disneynow.go.com, where it is streaming right now. Now, if you have watched all the episodes of this highly entertaining animated comics adaptation and loved them, then let’s talk about some other titles that explore similar ideas and themes. Here’s the list of best shows similar to ‘Big Hero 6’ that are our recommendations. You can watch several of these series like ‘Big Hero 6’ on Netflix, Hulu or Amazon Prime. 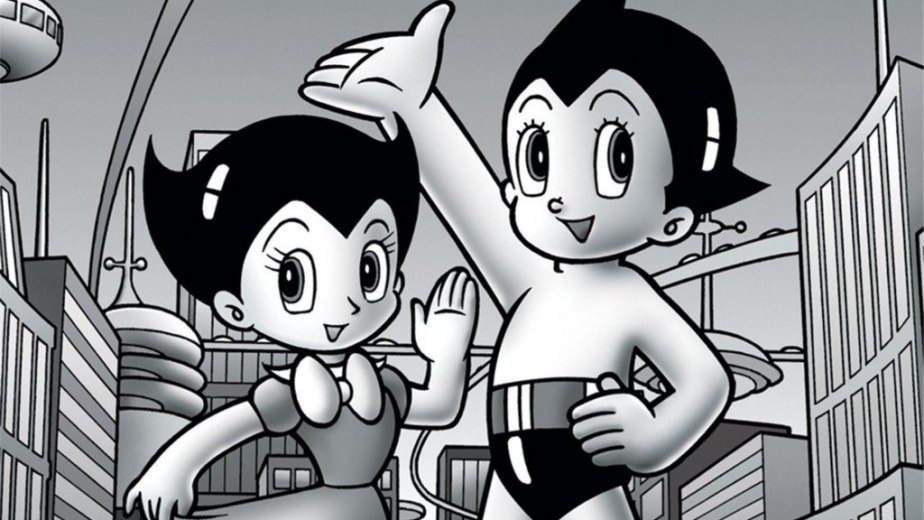 ‘Astro Boy’, written by Yoshiyuki Tomino and directed by Osamu Tezuka, is a Japanese manga television series that debuted on Fuji TV in 1963. Introducing the aesthetics which became so popular as the anime which we know today, ‘Astro Boy’ is based on the 1952 manga with the same name. It became a nationwide phenomenon after its release and hence, was soon remade in 1980 and then in 2003.

Set in 2000, which is 40 years into the future from 1960, ‘Astro Boy’ introduces us to Dr. Tenma, a scientist employed with the Ministry of Science’s Department of Precision Machinery. When his son dies in a car accident, he creates an advanced robot named Atom that resembles the deceased boy. But since this machine cannot grow like humans, Tenma, in a fit of rage, sells it off to a circus, believing that robots are meant to be only used as slaves. Atom is now being used in the circus to fight alongside other primitive robots in gladiator-style battles. But since he is peaceful, he eventually ends up meeting Professor Ochanomizu, the sympathetic successor of Dr. Tenma. When Ochanomizu realizes how advanced Atom is, he sets him free and becomes some sort of an affectionate, surrogate father figure for the robot. 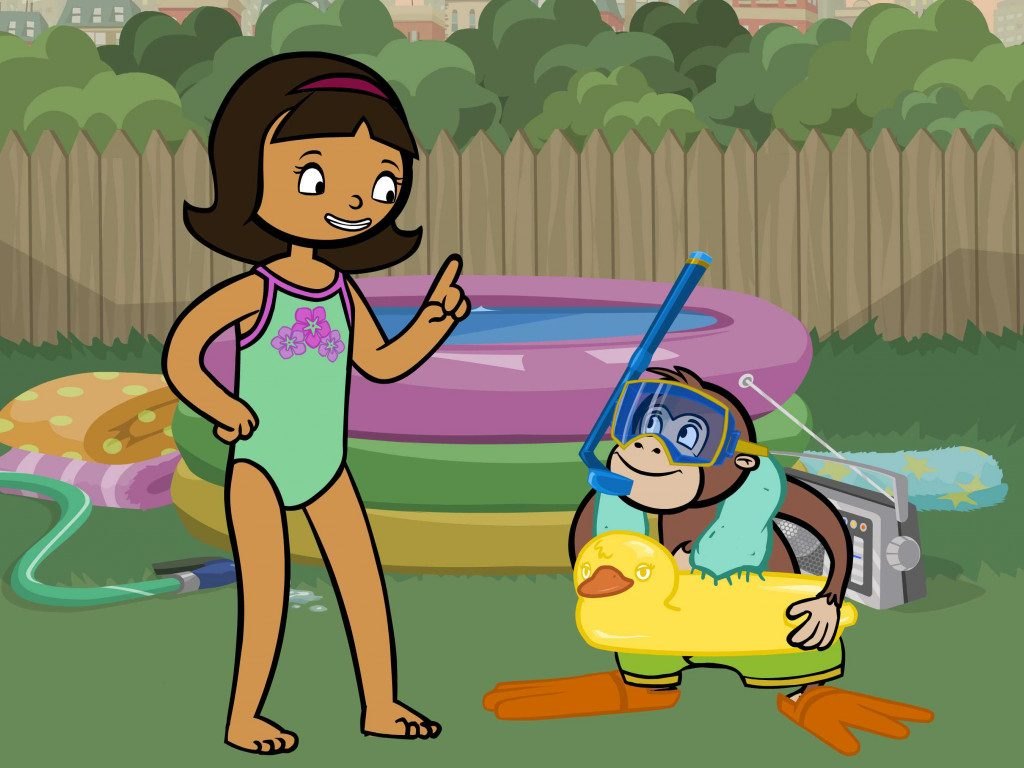 ‘WordGirl’, produced by the Soup2Nuts animation unit of Scholastic Entertainment for PBS Kids, is an educational animated series for children. Spanning four seasons with 26 episodes each, it is about a superhero girl named WordGirl, whose actual name in front of the general populace is Becky Botsford. She was originally a resident of the fictional planet named Lexicon but was mistakenly transferred to earth when she fell asleep on a spaceship at the age of four. Endowed with abilities such as super strength and flight prowess, WordGirl uses her powers to save the world from several threats, while using her fallen spaceship as a base for her operations.

WordGirl lives with her adoptive parents Tim and Sally Botsford and has a younger brother named TJ. Under the alter ego Becky, she studies at Woodview Elementary School and is friends with Violet Heaslip and Todd Ming. The story chronicles how Becky balances both these aspects of her lives while battling various villains who come to plague Fair City. 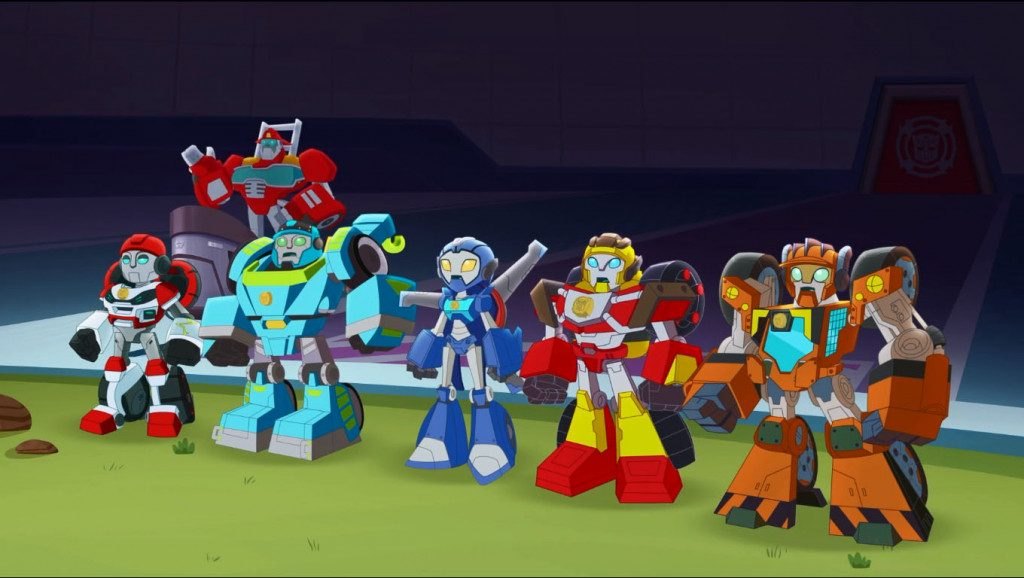 ‘Transformers: Rescue Bots’, an animated robot superhero series based on the ‘Transformers’ franchise, takes us to the fictional island of Griffin Rock, Maine. Here, a certain crew of Autobots, mainly created for rescue missions, operate under the instructions of Optimus Prime. After the destruction of Cybertron, Prime believes that they are not yet equipped to fight against the Decepticons and hence, puts them together with the Burns Family. Here, they train themselves on values such as teamwork and heroism while trying to understand the ways of the earth and learning tactics to defend the world against disasters. 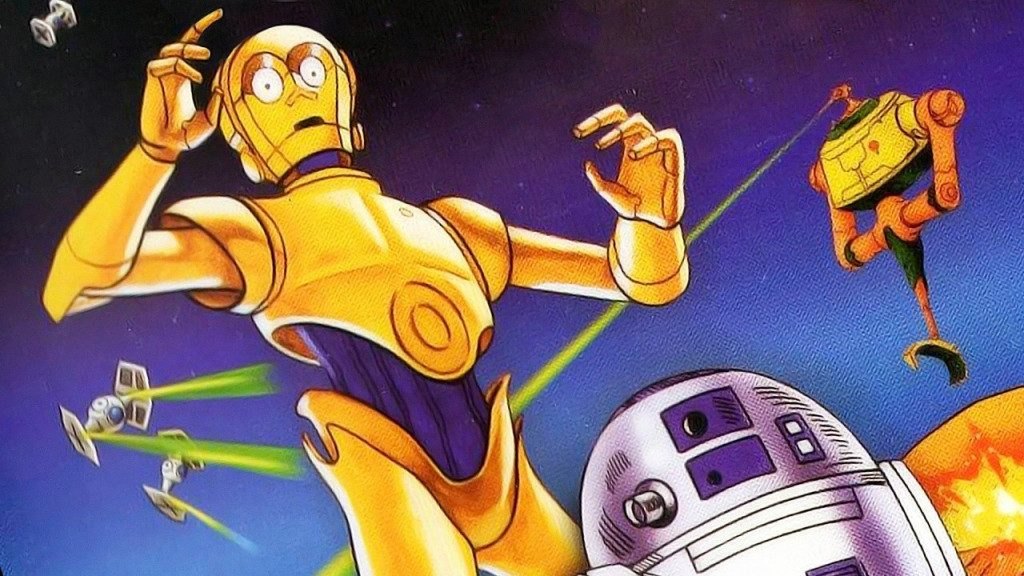 ‘Star Wars: Droids’, an animated spin-off of the original ‘Star Wars’ trilogy, is centered around the various adventures of the droids R2-D2 and C-3PO. It depicts the events that take place between those shown in ‘Star Wars: Episode III’ and ‘Episode IV – A New Hope’. The format of the show follows three arcs, where each arc begins with the droids adopting new masters and then being forced to leave towards the end. Set in an era four years after the ‘Revenge of the Sith’ and 15 years prior to ‘A New Hope’, these episodes chronicle the battles of the droids as they face multiple villains such as gangsters, criminals, pirates, Boba Fett, IG-88, the Galactic Empire, and others. Since these droids always have to juggle between new masters, they often need to tackle difficult situations which come their way.

‘DC Super Hero Girls’ revolves around the events at the Super Hero High School, which houses boys and girls with superpowers. Here, they face the challenges of attending classes, excelling in academics, and learning to use plus control their special abilities. All of the characters shown here are from the DC Universe and are voiced by actors who play their respective counterparts in movies and series franchises. 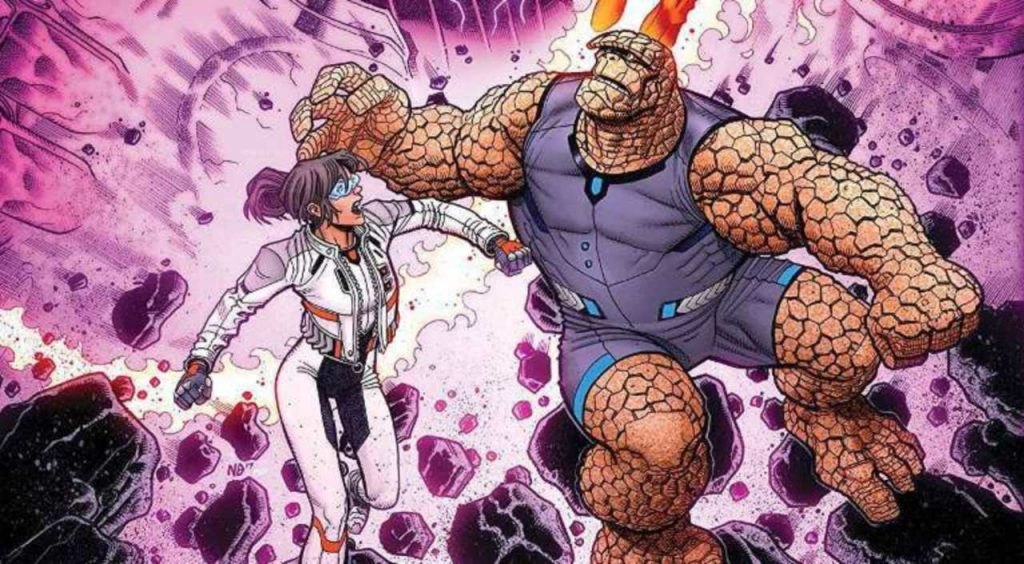 ‘The New Fantastic Four’, another Marvel animated series, is the second cartoon instalment of the Fantastic Four franchise. It revolves around the super-elastic Mr. Fantastic, the force field-wielding Invisible Girl, the orange rock-covered Thing and the data-crammed robot H.E.R.B.I.E. (Humanoid Experimental Robot, B-type, Integrated Electronics), who form this team of superheroes and save the world from multiple villains and alien invasions. 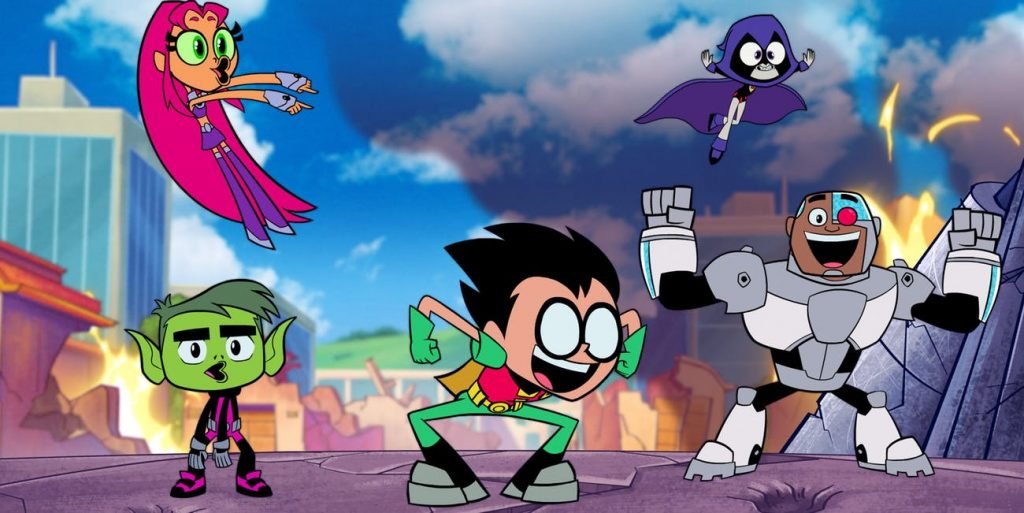 A popular animated series that debuted on Cartoon Network on April 23, 2013, ‘Teen Titans Go!’ is based on the eponymous DC superhero team. It chronicles the adventures of the young Titans who reside in Jump City. They have formed a surrogate family of teenagers and live a regular life when not saving the world. Without adult interferences, they often land in several funny and comic situations. As per Rotten Tomatoes, where the show has an approval rating of 67%, the synopsis goes something like this: “From Warner Bros. Animation, it’s the return of Robin, Starfire, Raven, Beast Boy and Cyborg in all-new comedic adventures. But these teen superheroes have more than just superpowers they have super-sized chores to do and they’re unsupervised!” 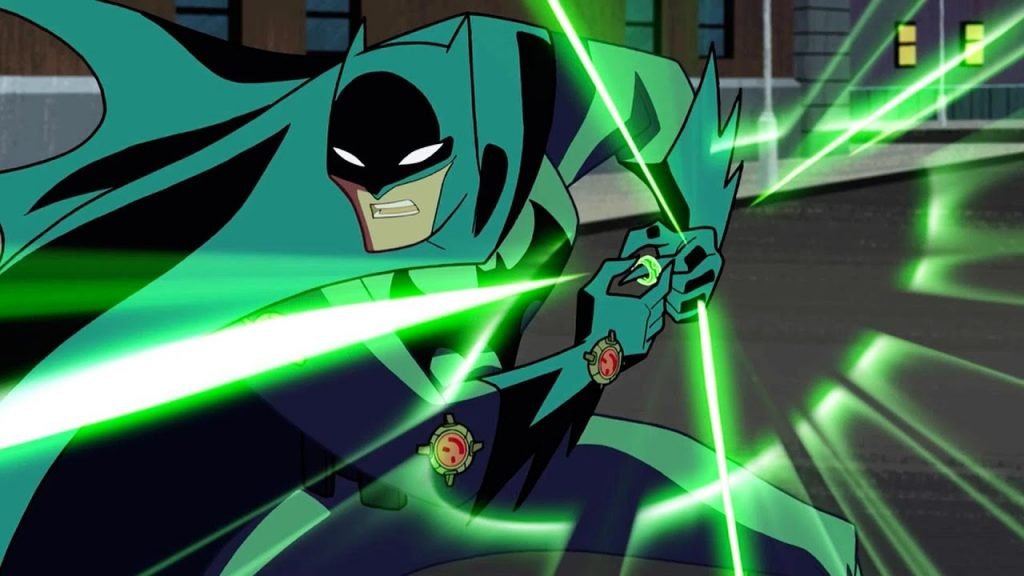 ‘Justice League Action’, produced by Jim Krieg, Butch Lukic, and Alan Burnett, is an animated adaptation of the DC Comics superhero team with the same name. It debuted in the UK on Cartoon Network on November 26, 2016, which was followed by its premiere on the same platform for the US audience on December 16, 2016. The show is about the multiple adventures of our favorite superheroes like Superman, Batman, Wonder Woman, and other members from the Justice League. It chronicles their adventures as they fight and try to eliminate several villains from the face of the earth. 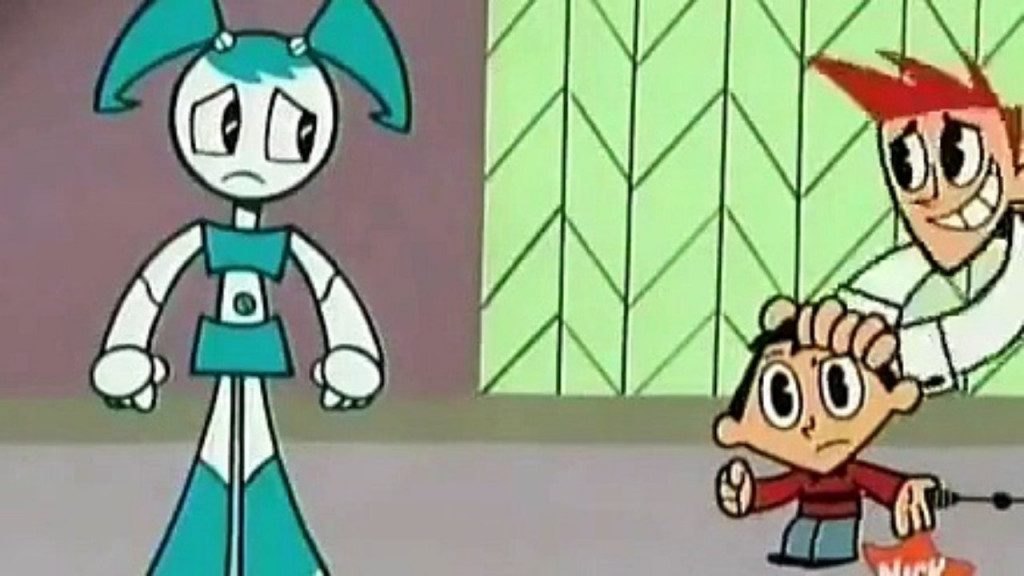 This science fiction fantasy superhero series is created by Rob Renzetti and premiered on Nickelodeon in 2003. The story takes us to the fictional city of Tremorton, which is home to a robot girl named XJ-9 or Jenny. The tale primarily revolves around her life and chronicles her adventures as she embarks on several battles to save the world from various evil threats. 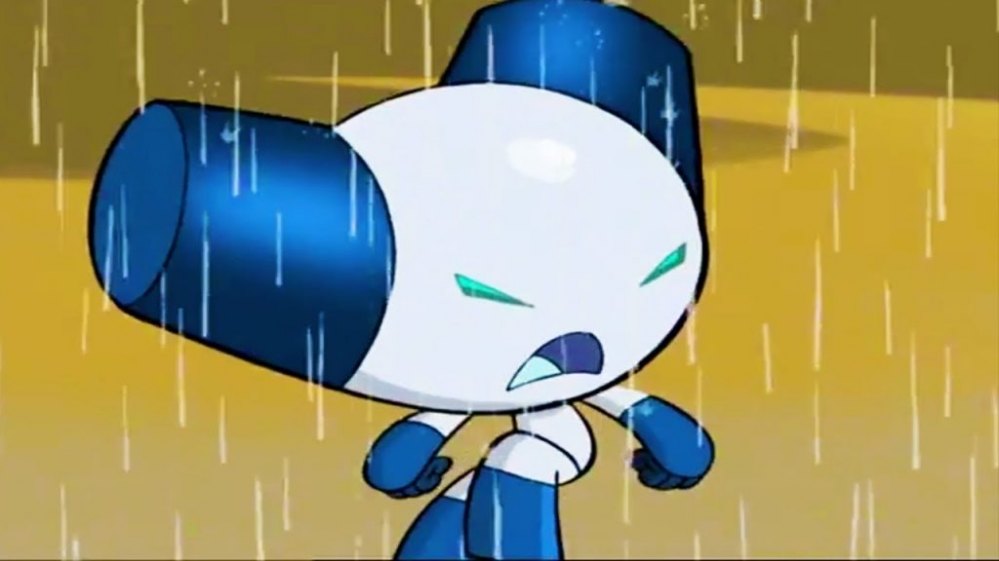 Produced by Alphanim for France 3 and Cartoon Network Europe, ‘Robotboy’ is a kids’ animated show created and designed by Jan Van Rijsselberge. It is directed by Charlie Bean and first debuted in the UK on November 2005 on Cartoon Network. ‘Robotboy’ introduces us to a robot with the same name created by Professor Moshimo. Since Moshimo fears that his creation might be stolen by his rival Dr. Kamikazi and his main henchman Constantine, he puts Robotboy under the care of a 10-year-old boy named Tommy Turnbull, who resides in San Francisco. Now living with Tommy and his friends Lola and Gus, Robotboy gradually adapts to his new surroundings while learning how it is like to live as a real boy. Meanwhile, he also has to thwart the advances of Kamikazi and Constantine, who are constantly attempting to capture him.