“The wars were so long ago nobody even remembers. Darkness and fear ruled until the time of the barons, seven men and women who forged order out of chaos. People flocked to them for protection. That protection became servitude. They banished guns and trained armies of lethal fighters they called Clippers. This world is built on blood. Nobody is innocent here. Welcome to the Badlands.” – this is the opening introduction as narrated by M.K. in ‘Into the Badlands’.

Welcome to the Badlands in a post-apocalyptic era, five centuries after the devastating war, which left nothing but ruins. The world now does have some remnants of its old technology such as electricity and vehicles but people are afraid to use guns and other means of nuclear warfare. Instead, they rely on the more traditional versions like our ancestors, such as melee weaponry and crossbows. Set in dystopic Oklahoma, the Badlands are controlled by powerful Barons who maintain their position by means of trade and monopoly over opium, lands, and fuel. They have ranks of highly trained, loyal warriors known as Clippers, captained by a Regent. Clippers are not allowed to marry or have families. Barons also possess a huge workforce of slaves called Cogs and prostitutes named Dolls.

Apart from the baronies, there are innumerable outside groups as well: lawless, homicidal bandits called the Nomads who stay in clans and survive by stealing during trade exchanges; the River King who controls the water trade; Totemists, religious fanatics who follow some kind of idol worship, and the Widow, who leads a movement against the feudal system. This show mainly chronicles the events in and around the apocalyptic Badlands and first premiered on November 15, 2015 on AMC. It is centered around a warrior and a young boy who travel through these dangerous lands in search of enlightenment.

Fans of ‘Into the Badlands’ mainly admire the series because of its dystopic setting, well-choreographed action sequences, and its bloody, fast-paced, yet entertaining narrative. Now if you have watched it and are looking for similar titles that capture one or all of the above aspects, then allow us to help you. Here’s the list of best shows similar to ‘Into the Badlands’ that are our recommendations. You can watch several of these series like ‘Into the Badlands’ on Netflix, Hulu or Amazon Prime. 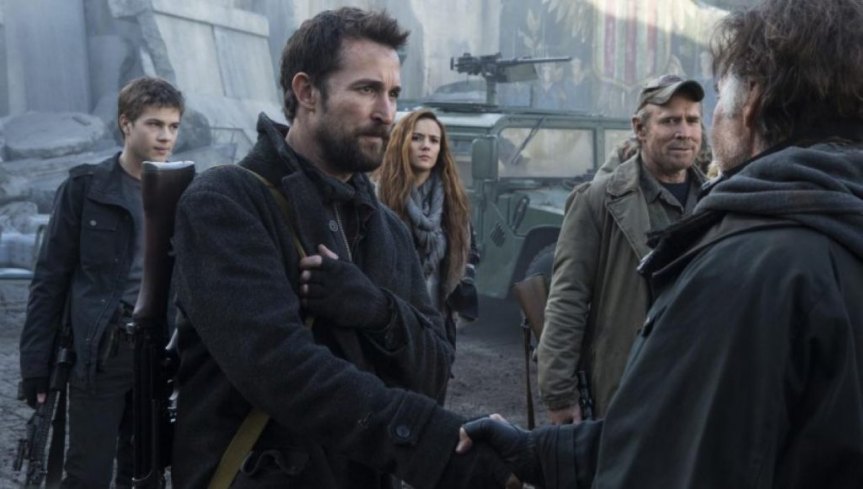 A post-apocalyptic sci-fi drama series, ‘Falling Skies’ comes from creator Robert Rodat and executive producer Steven Spielberg. It follows Tom Mason, who was previously employed as a history professor and later becomes second-in-command of the 2nd Massachusetts Militia Regiment. This regiment comprises civilians and soldiers trying to flee Boston after a devastating attack by aliens from outer space. ‘Falling Skies’ was released on TNT in the US, on Super Channel and Space in Canada. It debuted on June 19, 2011, and concluded with the 5th and final season on August 30, 2015. You can watch this show here

Attracting record viewerships and being a recipient of multiple awards, ‘The Walking Dead‘ is an AMC series that is set in a dystopic world after a zombie apocalypse wiped out most of the human population. Featuring an ensemble cast, the show is about the remaining survivors of the attack, who struggle to stay alive under constant threat from zombies, aka, walkers. The remaining humans also are in frequent conflict with each other, owing to the formation of separate communities, each with their own sets of rules and regulations. The show is so popular that it also gave rise to a spin-off series, ‘Fear the Walking Dead‘, and other talk shows, multiple webisodes, and motion comics. You can watch this series here. 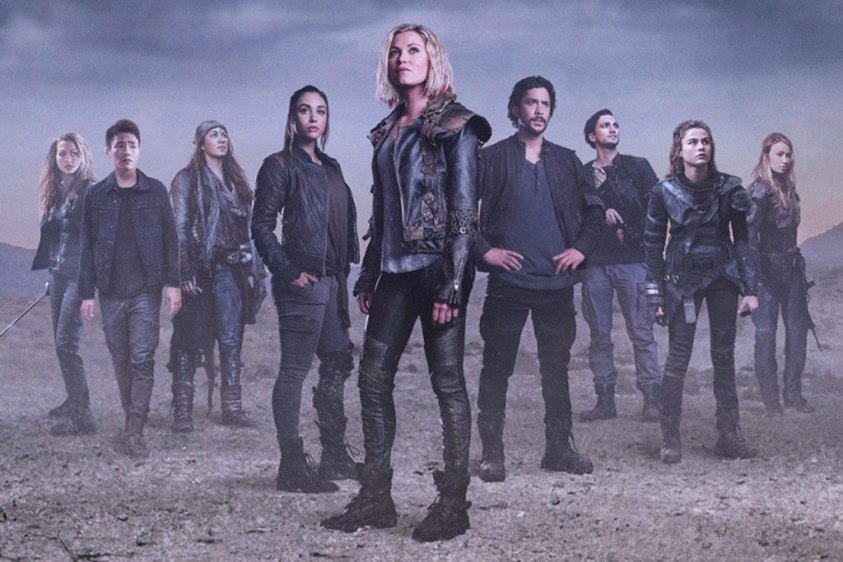 ‘The 100‘ is a CW sci-fi show that first aired on March 19, 2014, and is set 97 years after a nuclear apocalypse completely destroys the earth. Several of its survivors now live in a revolving space station known as the Ark. However, since the Ark’s population is steadily increasing, 100 juvenile detainees are sent to earth in order to check if it is still habitable. When the group arrives, the members discover that there are certain clans who have survived the apocalypse and are living here, namely the Grounders, Reapers and Mountain Men. Amidst these harsh settings, the 100 try to stay alive, while battling constant threats from the other inhabitants and trying to re-establish contact with the Ark. You can watch the series here. 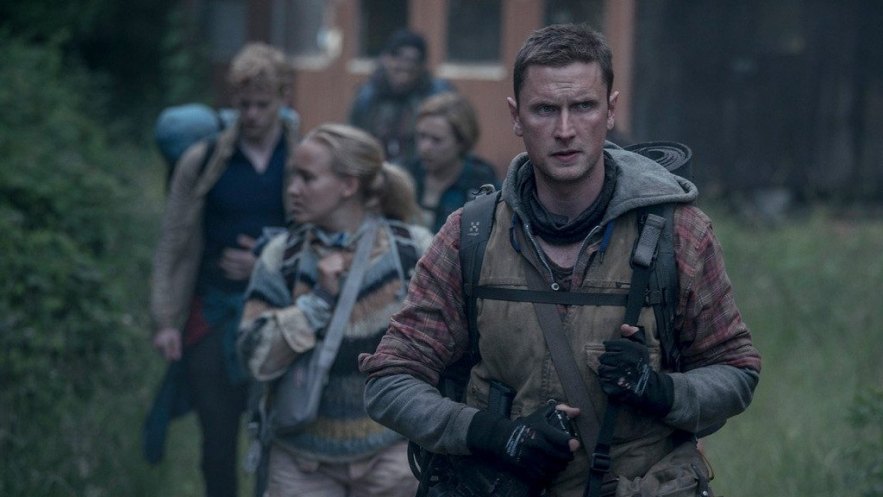 This Netflix Original first aired on the platform on May 4, 2018. The Rain follows two Danish siblings, 6 years after a virus-infused rainfall kills everyone in Scandinavia. Their father, a scientist, had kept them in a bunker once the rain started and they had been staying here all this time. Once they emerge, they meet some other young survivors and together embark on a quest to locate a safe haven and find their father, who might have answers for the cure of the virus infection. You can watch this show here. 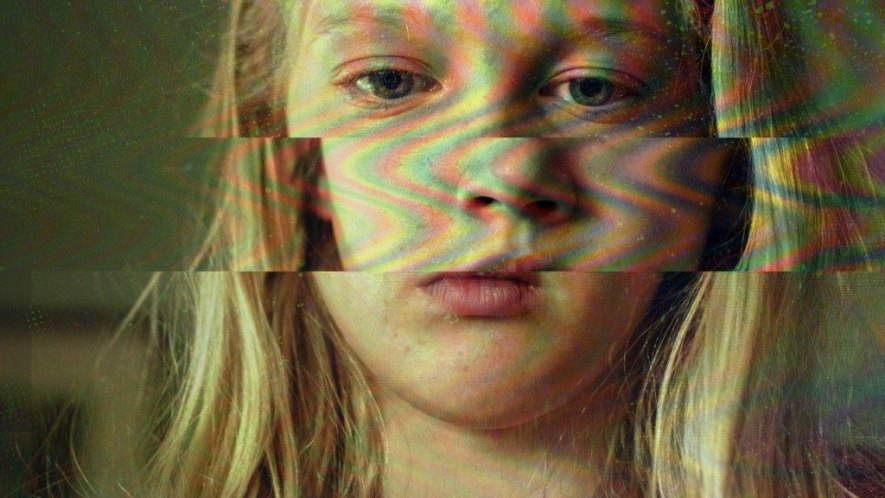 ‘Black Mirror’ is a sci-fi series that tries to explore a technology-dominated near future when man’s greatest innovations clash with basic human instincts, relationships, and emotions. This British show follows an anthology format, with each episode featuring one particular story arc. While some plot lines are dark and satirical, others are experimental and light. ‘Black Mirror’ first premiered on Channel 4 in December 2011 and then was taken over by Netflix from the 3rd season onwards. You can watch it here. 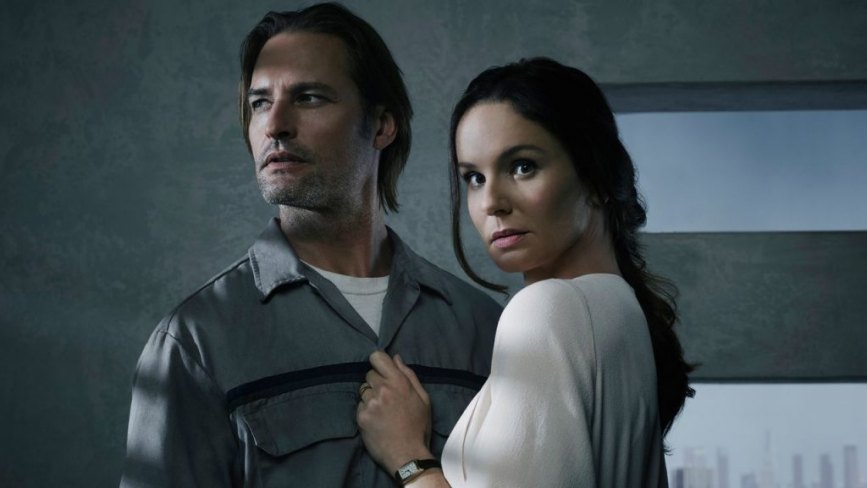 ‘Colony’ is another American dystopic sci-fi drama that first aired on USA Network’s website on December 15, 2015, and premiered with its 3rd and final season on May 2, 2018. The series is set in the near future and revolves around the Bowmans and their extended family in Los Angeles. In a divided post-apocalyptic world, some choose to collaborate with the new order and seek its benefits while others rebel against it and face dreadful consequences. LA has been invaded by outsiders, and the inhabitants are forced to stay within this walled city. When Katie and Will Bowman’s son disappear, the couple prepare to fight against all odds in order to bring him back. You can watch this show here. 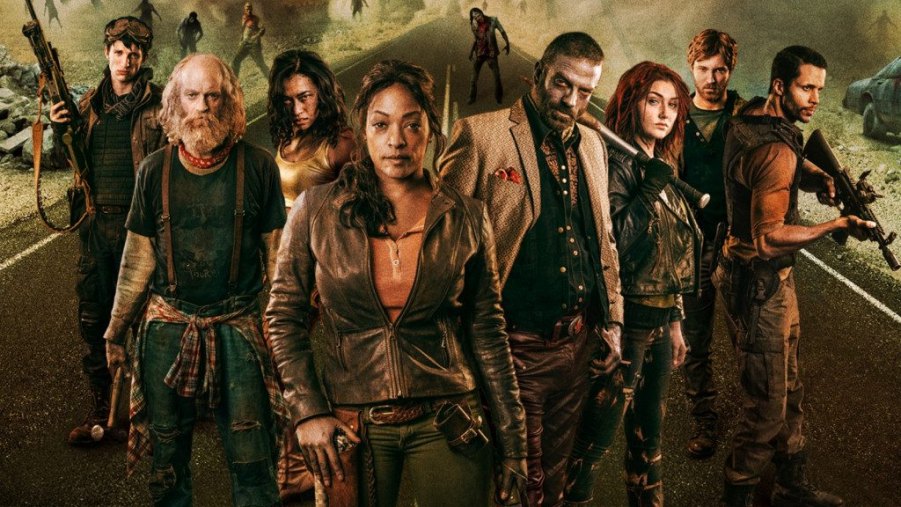 ‘Z Nation’ is an American dystopic drama that debuted on Syfy on September 12, 2014, and concluded with its 5th and final season on December 28, 2018. It is another series that is set in the Earth after a zombie apocalypse kills almost all humans. The plot is centered around Murphy, an inmate who was among three others who were subjected to a government-approved experiment, each being given a different test vaccine. Murphy was the only one who survived the vaccine injection and has blood that contains antibodies, making him the only hope for a vaccine. He has developed into something of a hybrid between a zombie and a human. ‘Z Nation’s plot follows Murphy and a certain group of survivors who embark on a quest to save mankind from impending doom. 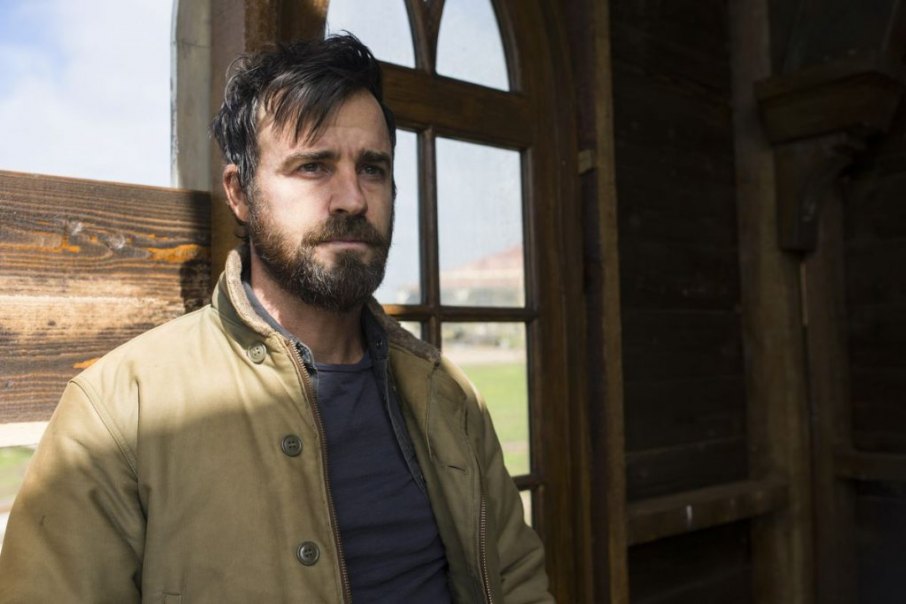 The Leftovers aired for 3 seasons on HBO from June 29, 2014, to June 4, 2017. The story begins 3 years after the “Sudden Departure”, a global catastrophe that led to the disappearance of 140 million people. This led to the breakdown of the existing religious regimes and gave birth to different cults following different faiths, such as the Guilty Remnant and Holy Wayne. ‘The Leftovers’ follows the lives of the remaining survivors as they struggle amidst the conflicts between these varied fanatic groups. Due to its grim tone and somber setting, this show has garnered a strong cult following for itself, along with immense critical acclaim. 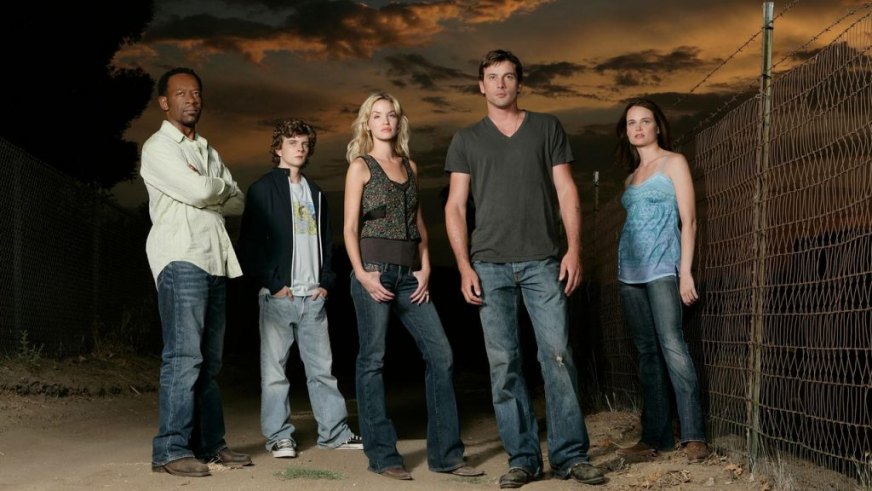 After a nuclear attack on 23 states of the United States, survivors have gathered in the fictional city of Jericho in Kansas. This is the premise of the dystopic action-drama, ‘Jericho’, which premiered on CBS on September 20, 2006, and concluded on March 25, 2008. Another cult favorite, ‘Jericho’ gave rise to a comic-book series that picks up the storyline of the original series. 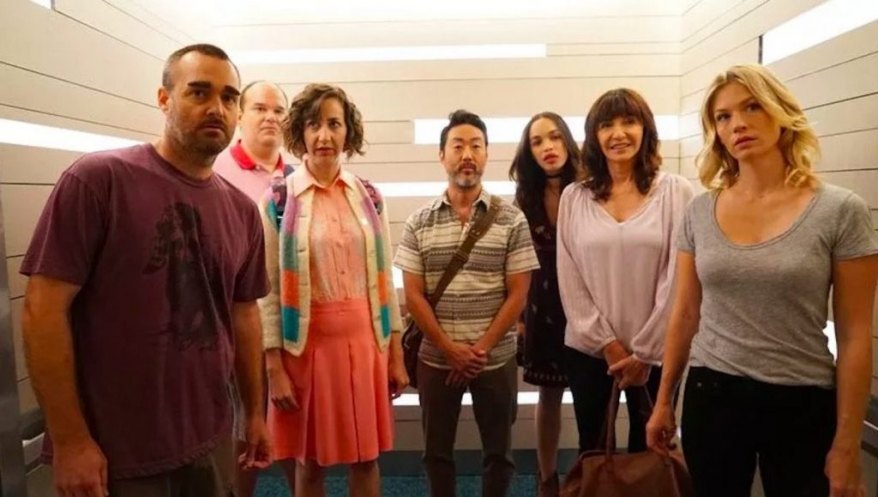 Post-apocalyptic shows need not be always brutal, grim, and action-packed. And therefore, to introduce a bit of variety, let’s add this final name to our list. ‘‘The Last Man on Earth’ is an American post-apocalyptic comedy-drama that debuted on Fox on March 1, 2015. It concluded with its 4th and final season which was released on October 1, 2017.

When a virus infection kills everyone on Earth, Phil Miller seems to be the only survivor on the planet. He tries to find other living humans in his hometown, Tucson but is unsuccessful. Finally, when he is about to commit suicide, he meets Carol, another survivor, and they decide to marry with an intention of repopulating Earth. Gradually, they meet other survivors as well. However, Phil is soon banished from the town because of his constantly irritating behavior. The subsequent seasons follow the couple as they reach other towns, meet with several individuals, and face different situations together.

‘The Last Man on Earth’ garnered generally positive reviews because of its fresh take on the serious topic of a post-apocalyptic earth. Accompanied by ingenious plot twists and profound laughter, this show comes as a whiff of fresh air in a genre dominated by action, violence, and mindless zombies.