11 TV Shows You Must Watch if You Love Legion

‘Legion’, a psychological thriller-cum-superhero series, is based on the Marvel Comics character, David Haller aka Legion, and is created by Noah Hawley. Its plot is entwined with that of the X-Men franchise and introduces us to Haller who has been suffering from schizophrenia from a young age. Combining contemporary elements with styles from the 60s, the critically acclaimed show first premiered in 2017.

‘Legion’ has an interesting plot. After Haller is diagnosed with schizophrenia, he spends most of his growing years in different psychiatric institutions. However, when he reaches his early 30s, he shockingly realizes that the voices he hears in his head might not be due to any mental illness. The whispers may actually be true. Further consultation with therapist Melanie Bird and a crew of specialists with extraordinary powers, comprising Ptonomy, Kerry, and Cary, leads to the conclusion that Haller has been endowed with hidden, unimaginable abilities since his childhood. A truth that had been locked away all this while under the disguise of his mental ailment. In fact, he is a mutant and his dissociative identity disorder hides individual superpowers, controlled by each of his many personalities.

Bold, visually enticing, and exceptionally intelligent, ‘Legion’ is a surreal, engaging watch that takes a different approach to the otherwise conventional genre of superhero shows. Its format follows a distorted narration, quite apparent from the distorted views of Haller’s several personas. Now if you have finished bingeing all its episodes, we understand that you might already be looking for similar titles that revolve around a connected theme. So, here’s the list of best shows similar to ‘Legion’ that are our recommendations. You can watch several of these series like ‘Legion’ on Netflix, Hulu or Amazon Prime. 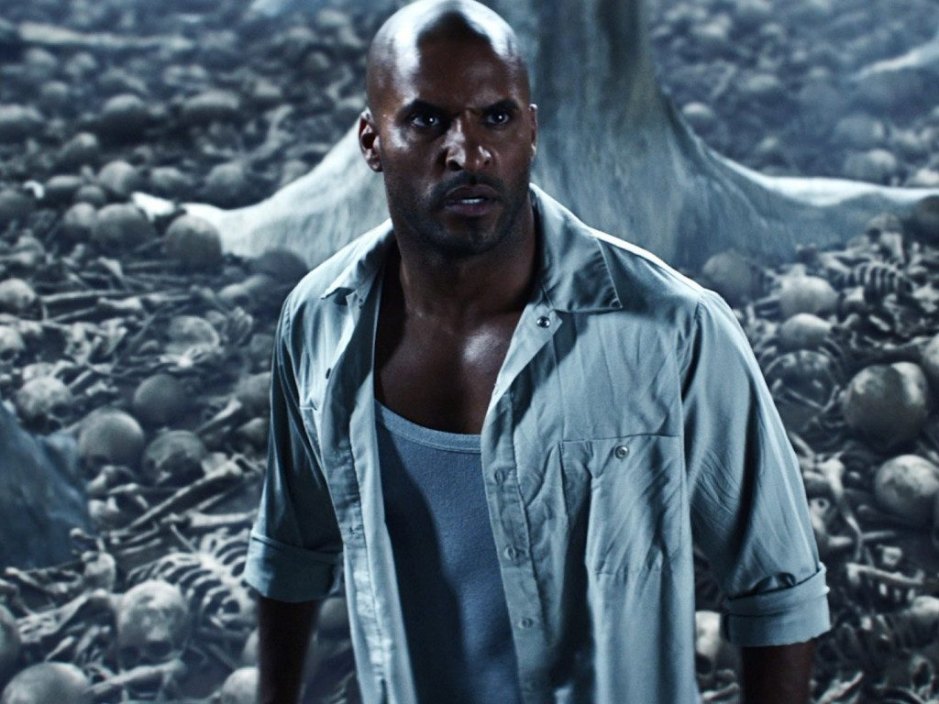 ‘American Gods‘, a multiple award-winning fantasy drama series, is an adaptation of Neil Gaiman’s novel of the same name. It features Bryan Fuller and Michael Green as the developers and premiered on April 30, 2017, on Starz. The story of this show is centered around the ex-convict, Shadow Moon, who leads a life of solitude, devastation, and confusion after the death of his wife. This is when he meets the strange, witty, and a mysterious man named Mr. Wednesday. He asks Moon to be his bodyguard. Together, they embark on a weird quest where our protagonist discovers the hidden streets of America. He comes to know that magic is not fiction, but it is real. He also discerns the terrible, imminent war between the Old Gods and the New Gods. The main aim of Wednesday is to restore the power of the Old Gods by convincing them to join hands and fight against new-age technology and media that threatens to engulf humanity. 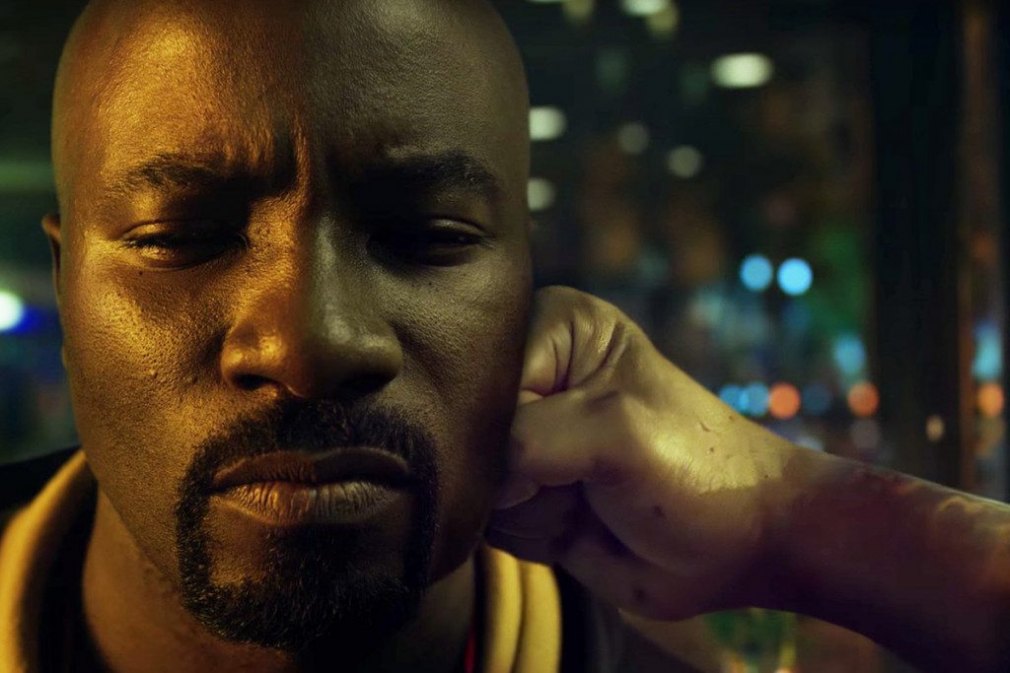 ‘Luke Cage‘ is centered around the protagonist who goes by the same name and is endowed with exceptional strength and an impenetrable skin. Set in the fictional town of Harlem, it follows the titular character’s story as he attempts to start a quiet life but again finds his way into trouble. He is compelled to reveal his true identity yet again and save the city from impending doom. During his battle, he also has to face his past which he had tried to bury all this while. 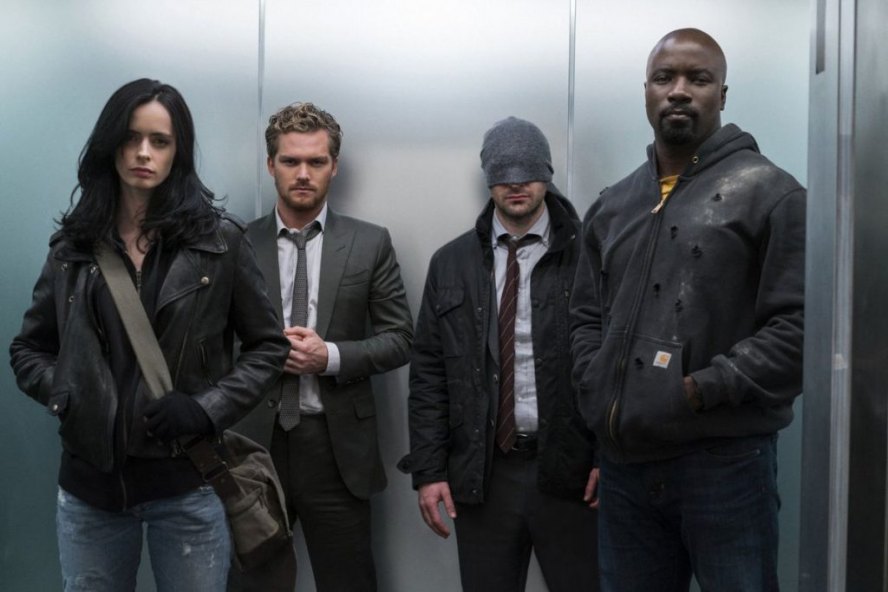 ‘The Defenders‘ brings together four of Marvel’s greatest superheroes, namely Daredevil, Jessica Jones, Iron Fist, and Luke Cage as they present a united front and fight as a team to save New York City from destruction by the supervillain organization, The Hand.  As they join hands to fight against their common enemy, each of these characters also has to battle with their own personal issues and solve differences between their individual opinions. 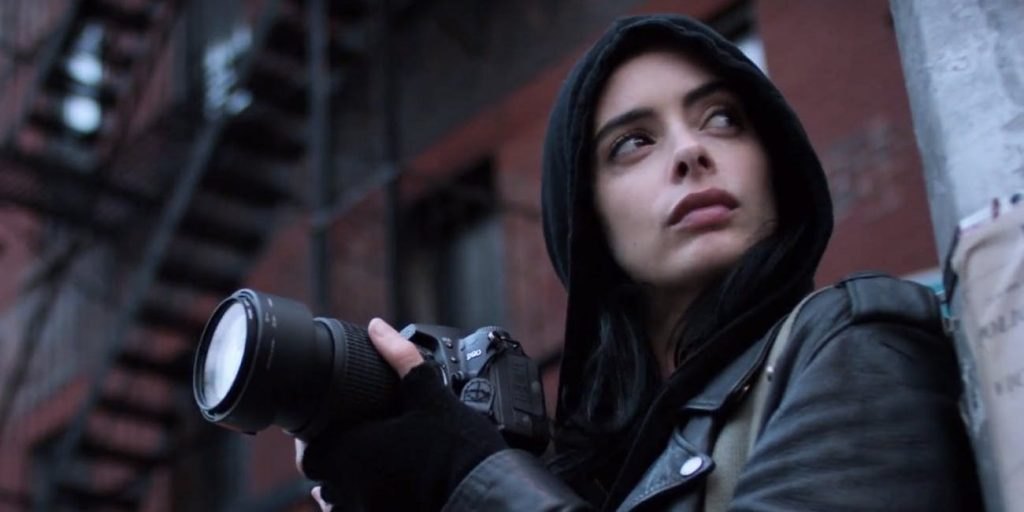 Mysterious, dark, and complex, Jessica Jones, is yet another Marvel superhero who possesses the powers of superhuman strength and mind control. However, after her brief stint as a superhero ends due to a tragedy, she starts living in an apartment in New York City and runs her detective agency called Alias Investigations. Struggling through daily bills and attempting to survive each day, she also suffers from post-traumatic stress syndrome. The character of Jessica Jones surely qualifies as the most charismatic defender. 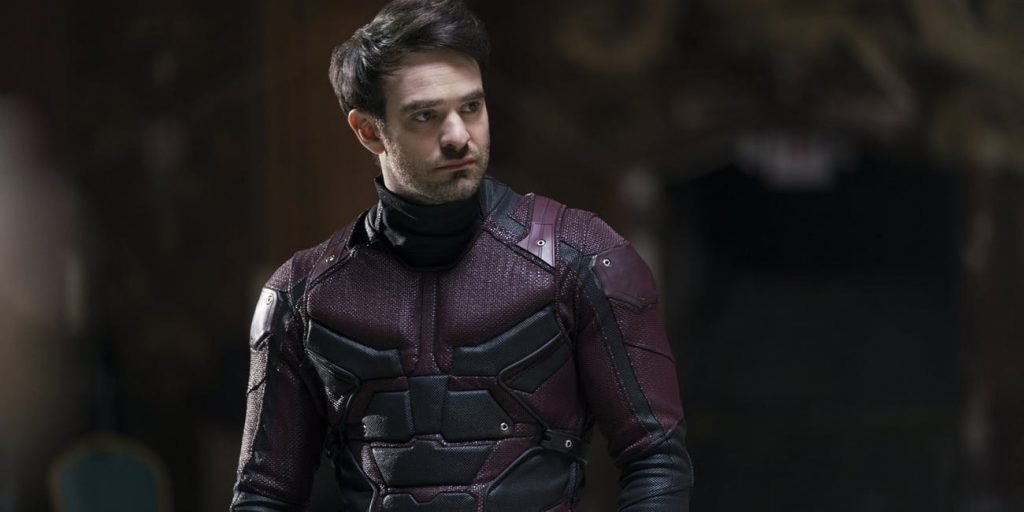 Matt Murdock might seem like a regular guy you’d meet on the streets. But after a childhood accident left him blind on both the eyes, he harnessed the power of his other senses and transformed himself into ‘Daredevil’. Working as an attorney in his own law firm by day, he turns into a vigilante at night and fights crime on the streets of New York. Although his official job is to protect the law, most of the time, he has to take matters into his own hands in order to protect Hell’s Kitchen from frequent threats. 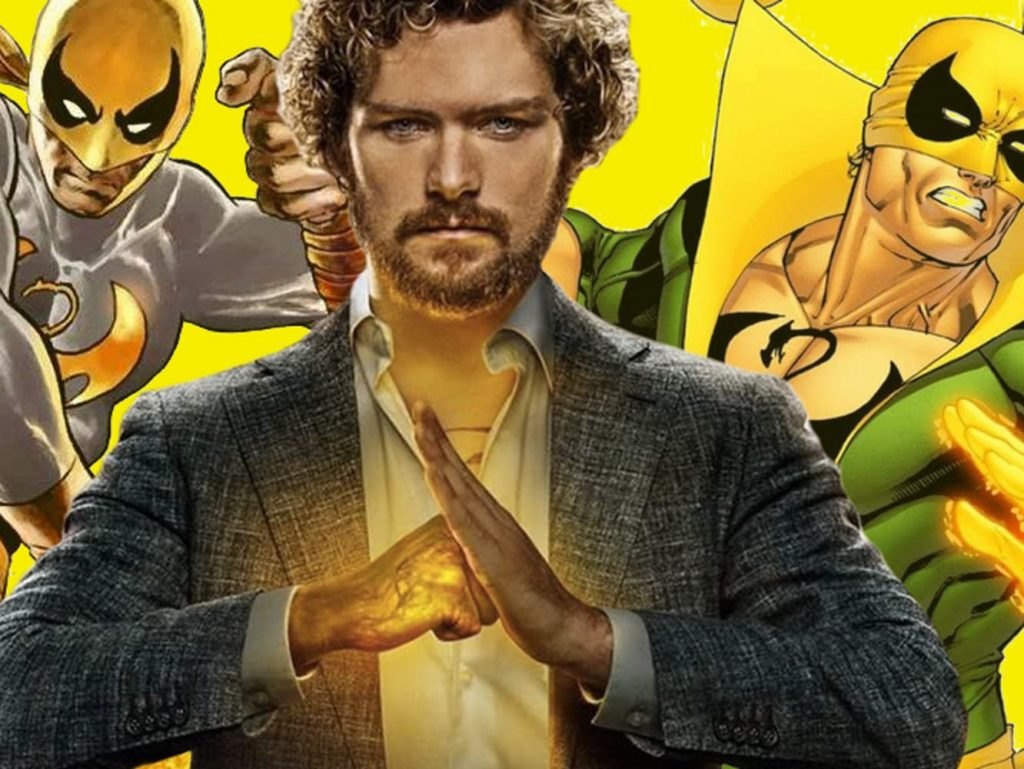 Danny Rand is a martial arts action hero who also holds the mystical powers of ‘Iron Fist‘. When he was aged 10, he was the only survivor of a plane crash that claimed the lives of his extremely well-to-do parents. He spent his childhood years in the city of K’un-Lun, where he was trained for endurance, survival, and fierce fighting techniques by the warrior monks. Now, when he returns to New York to claim his family’s company, he has to choose between his ambitions and his responsibilities as the ‘Iron Fist’. 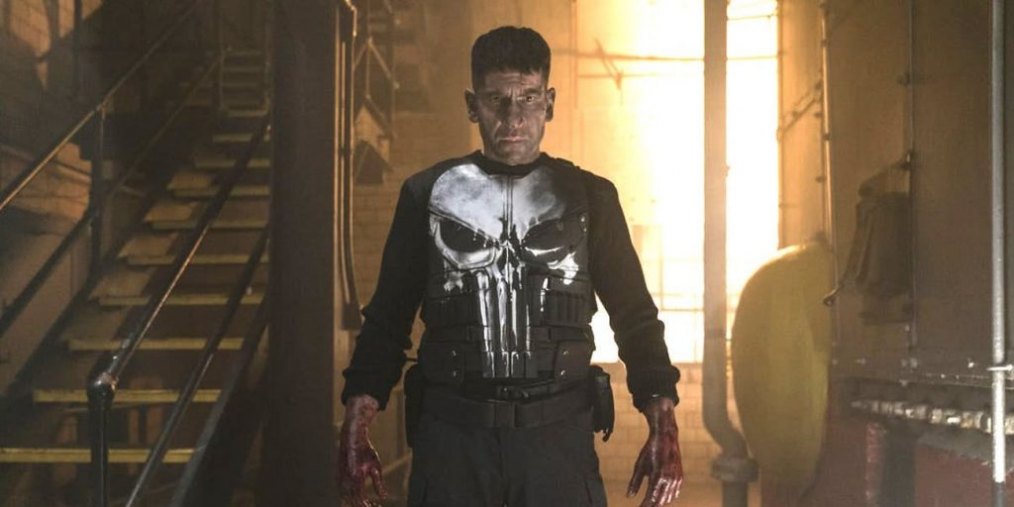 Frank Castle, also known as ‘The Punisher‘ is yet another Marvel character whose only mission is to take revenge from those who had murdered his family. As he embarks on this quest, he finds out darker truths about more sinister conspiracies connected to the criminal underworld of New York. 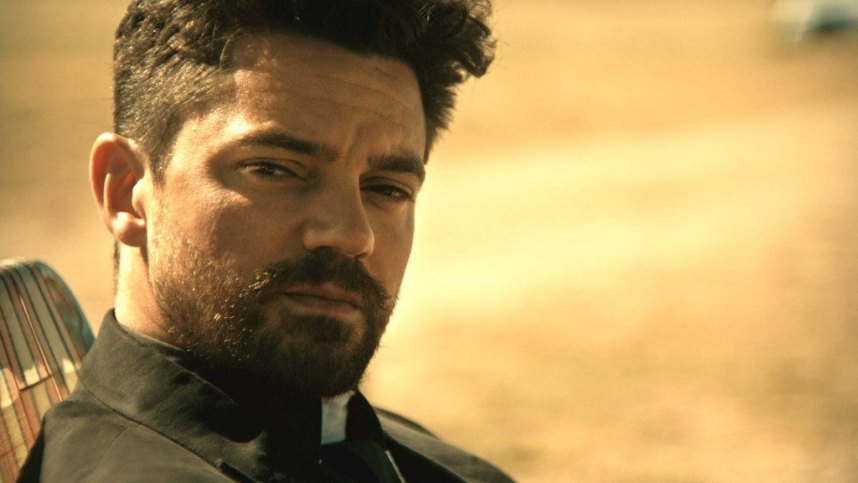 ‘Preacher‘, an adaptation of Garth Ennis and Steve Dillon’s famed 1990s comic book franchise of the same name, introduces us to Jesse Custer, a former outlaw who comes back to his hometown in West Texas to resume his responsibilities for his father’s church. However, when a certain mysterious force awakens some inhuman abilities within him, he partners with Tulip and Cassidy and embarks on a mission to discover ‘God’. But the path he takes is not easy. Along the way, he has to face several hellish entities, supernatural beings, and evil forces. 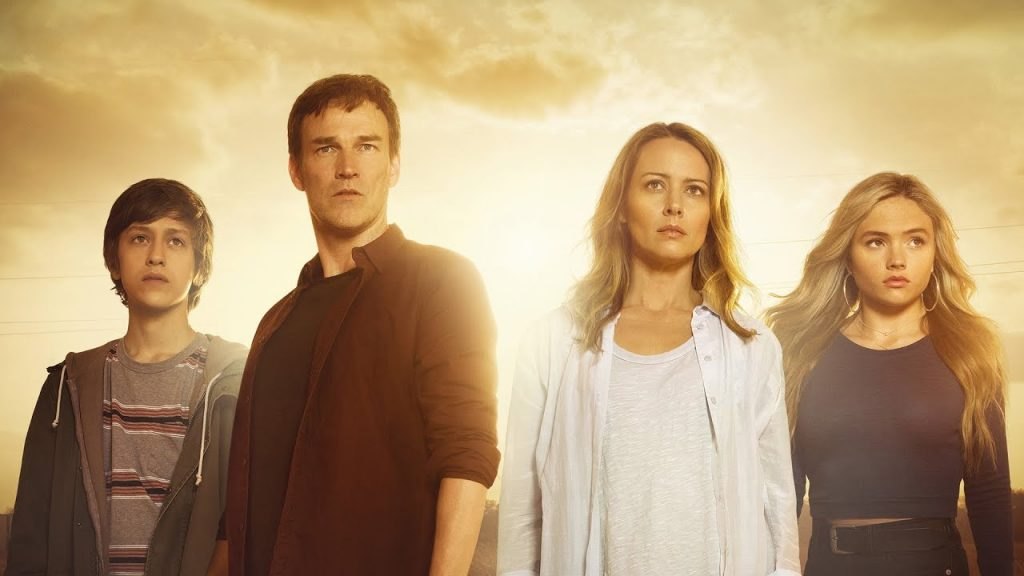 ‘The Gifted‘ transports you to an alternate era in which the original X-Men have disappeared. When a normal family discovers that their children are actually mutants, they go on the run from the authorities. During their journey, they come across an underground society, which comprises individuals with similar mutant capabilities. Together, they join hands to fight against a mutual common enemy and struggle to survive in a world packed with dangers and threats. 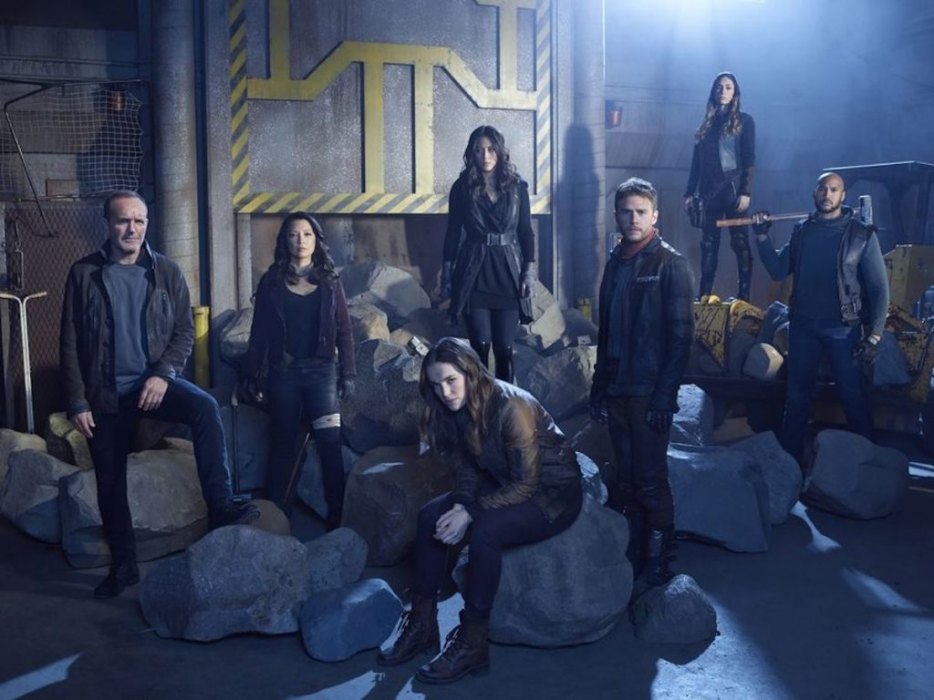 ‘Agents of S.H.I.E.L.D.’ is created by Joss Whedon, Jed Whedon, and Maurissa Tancharoen and it debuted on ABC in 2013. S.H.I.E.L.D. (Strategic Homeland Intervention, Enforcement, and Logistics Division), a spy agency in the Marvel Universe, holds the responsibility of keeping peace in a world inhabited by superheroes. Focusing mainly on Phil Coulson, who heads his crew of S.H.I.E.L.D. agents, the series chronicles the efforts of the team as they battle several evil forces such as Hydra, the Inhumans, Life Model Decoys, and the Kree (alien entities). 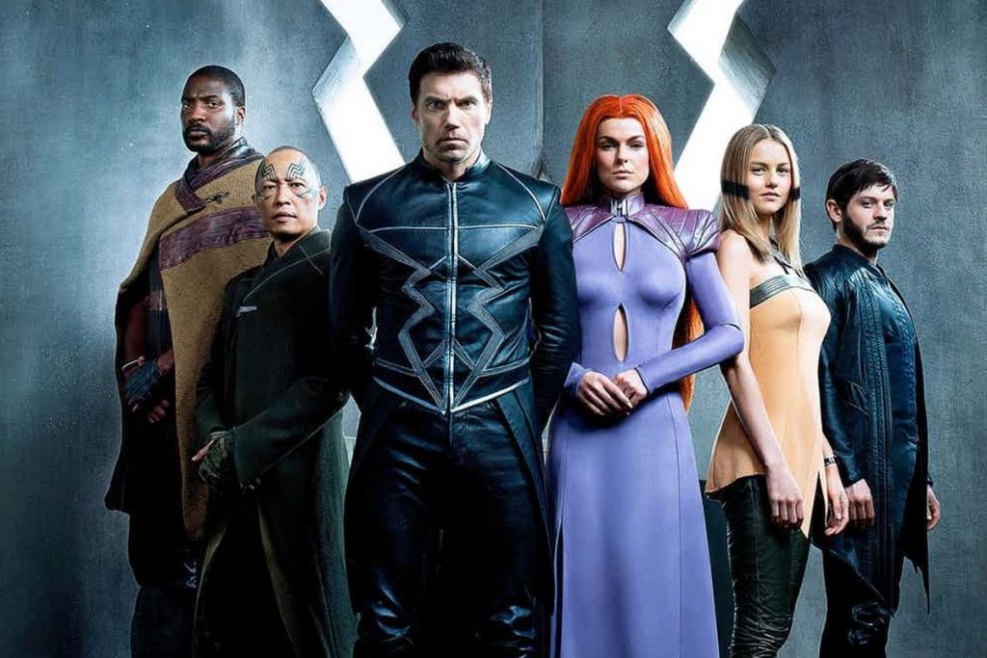 Our final entry on the list is also a Marvel series, which features Scott Buck as the creator and premiered on ABC in 2017. The story is about members of the Inhuman Royal Family, and it mainly revolves around Black Bolt. Bolt is the head of this family and the king of Attilan, who has the power to cause massive destruction with a mere whisper. Therefore, this enigmatic and fascinating character never speaks and communicates only via sign language. The queen of Attilan and Holt’s wife, Medusa can control and move her hair.

Karnak is a cousin and trusted adviser, who serves as the main strategist. Gorgon, another cousin, heads the royal troops and has hooves through which he can create seismic waves. Crystal is Medusa’s sister and has the power to control elements, while Louise is an earthling who harbors a deep passion for lunar and space-related phenomena. Maximus is Bolt’s brother, who loses his powers after the Terrigenesis process, making him the antagonist in the family. Now, when Attilan has to face the aftermath of a military coup, the family (leaving Maximus) retreats to Hawaii, where they fight to save the world and protect themselves from the villain, Maximus.