‘Queen Of The South‘ is a crime drama TV series based on a Spanish telenovela called ‘La Reina del Sur’. The story is originally taken from a novel written by Spanish author Arturo Pérez-Reverte. The series is centered around a character called Teresa Mendoza and chronicles her rise from extreme poverty in the Mexican region of Sinaloa to becoming one of the most influential drug dealers in the United States. Teresa starts off her association in the world of drug trafficking as the girlfriend of a pilot who is assigned to smuggle drugs from Mexico into the USA. When her boyfriend is killed, Teresa herself gathers all his associates and steps in as the leader of the organization. She travels to the United States to establish her business. Her connections with Mexico helps her in smuggling drugs into USA and Teresa soon starts controlling a major amount of various drugs sold in the country.

If you enjoyed watching this show and are looking for more titles that explore similar ideas and themes, then we’ve got you covered. Here’s the list of best shows similar to ‘Queen of the South’ that are our recommendations. You can watch several of these series like ‘Queen of the South’ on Netflix, Hulu or Amazon Prime. 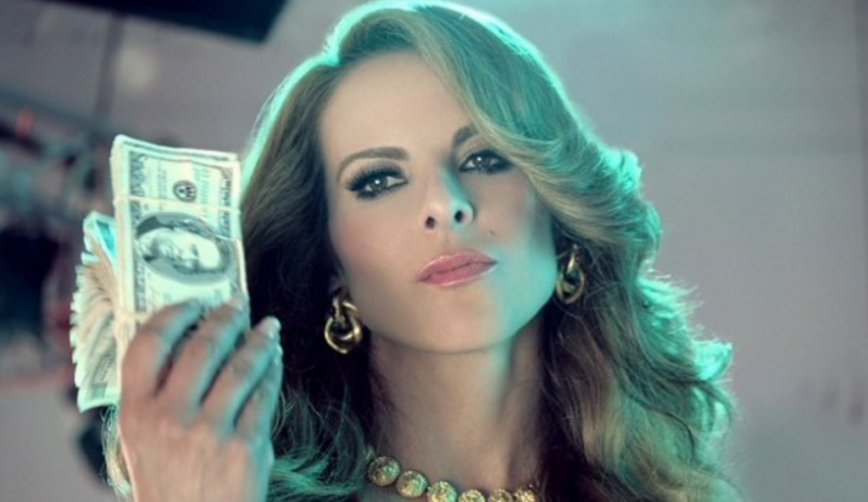 ‘La Reina del Sur’ is the original Spanish language TV series on which ‘Queen Of The South’ is based. The series starts off in Mexico where Teresa Mendoza is a poor woman who’s in love with a pilot who traffics drugs for a Mexican drug cartel. When her boyfriend is found murdered, Teresa fears for her own life and ventures out to protect herself in any manner possible. The journey takes Teresa to the South of Spain. After facing numerous challenges and personal losses, she soon becomes the boss of a drug trafficking organization and starts an intercontinental business. She accepts great personal sacrifices to build her empire. Some believe that Teresa’s character is based on the Mexican drug trafficker Sandra Ávila Beltrán, who is popularly known as Queen of the Pacific. 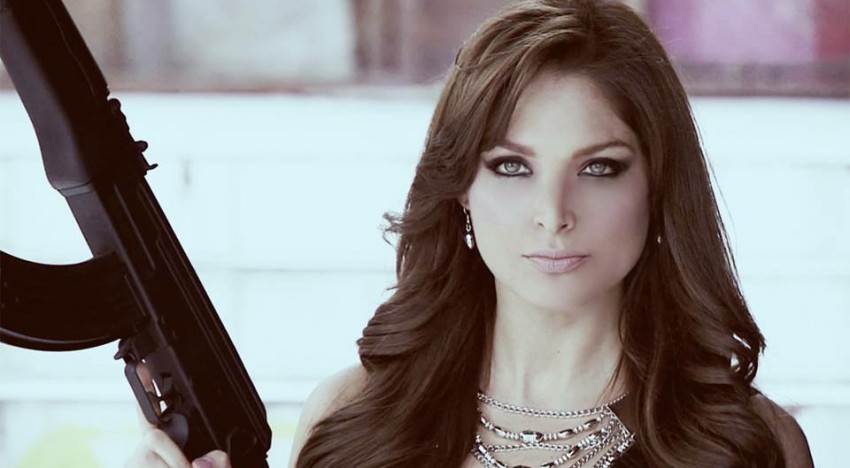 The American series ‘Senora Acero’ deals with the lives of two women, Sara Aguilar and Vicente Rigores, in its five-season run. The first two seasons are dedicated to Aguilar’s story. When we meet the character for the first time, she is a poor Mexican housewife who slowly becomes a highly respected drug dealer. Her friends and family, who live in her protection, are some of the safest people in Mexico. Vicente Rigores’ story starts from Season 3. Vicente helps Mexican immigrants cross over to the United States. Later, she discovers that she is a member of the drug-dealing family, the Aceros. Vicente naturally becomes quite powerful after being accepted by her family. She uses her newly gained power to keep helping the poor migrants. 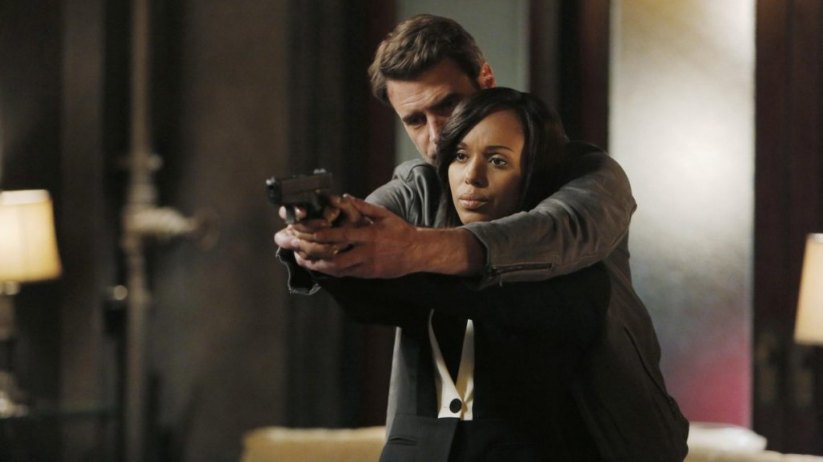 Kerry Washington stars as the lead character Olivia Pope in this political thriller series. ‘Scandal’ is the first time since 1974’s ‘Get Christie Love!’ (where Teresa Graves plays the leading character) that an African-American woman plays the leading character in a series. Shonda Rhimes, the creator of ‘Grey’s Anatomy‘, is also the creator of this show. The series is loosely based on the life of Judy Smith, a crisis manager who handled major cases of personal scandals of high-ranking people during the Bush administration. The character of Olivia Pope takes us through the dark and murky political underbelly of Washington, news of which does not reach the common people. Interestingly enough, Season 1 of ‘Scandal’ is the first series ever which saw the cast and crew members live-tweeting answers asked by viewers while the episodes aired. 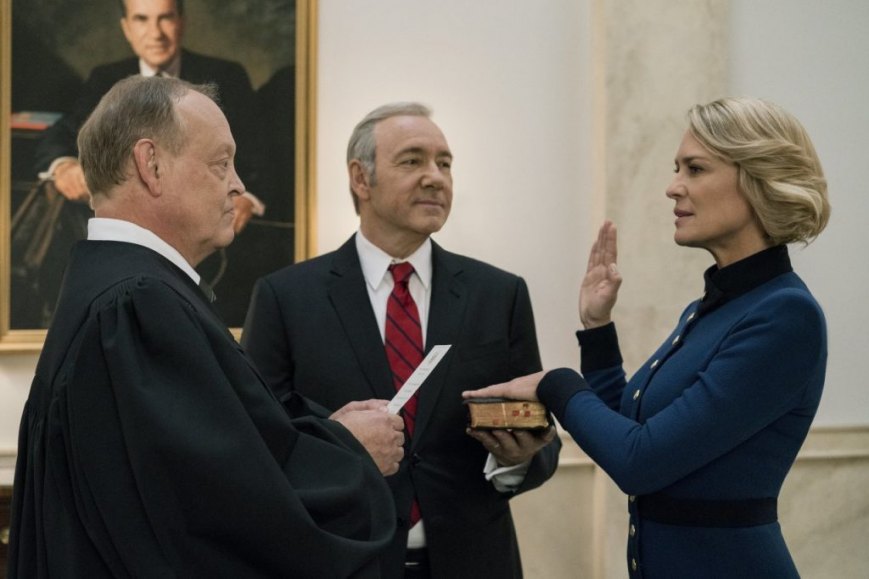 ‘House Of Cards‘ is one of Netflix’s first and most famous original shows ever. The series is inspired by a 1990 BBC series of the same name. The story of ‘House Of Cards’ is based on a novel written by Michael Dobbs. The show centers around the characters of Frank and Claire Underwood, played by Kevin Spacey and Roin Wright respectively. Frank Underwood is a ruthless politician who starts off as the Whip for the Democratic Party, only to carve his way towards the highest office in the United States. The reason this series is included in this list is because of Claire Underwood. Claire is an extremely strong character who becomes the Vice President by the fifth season. She then betrays her husband and becomes the President herself. Robin Wright’s performance in the show received hugely positive reviews. Both Wright and Spacey won Golden Globe Awards for their performances in the series. 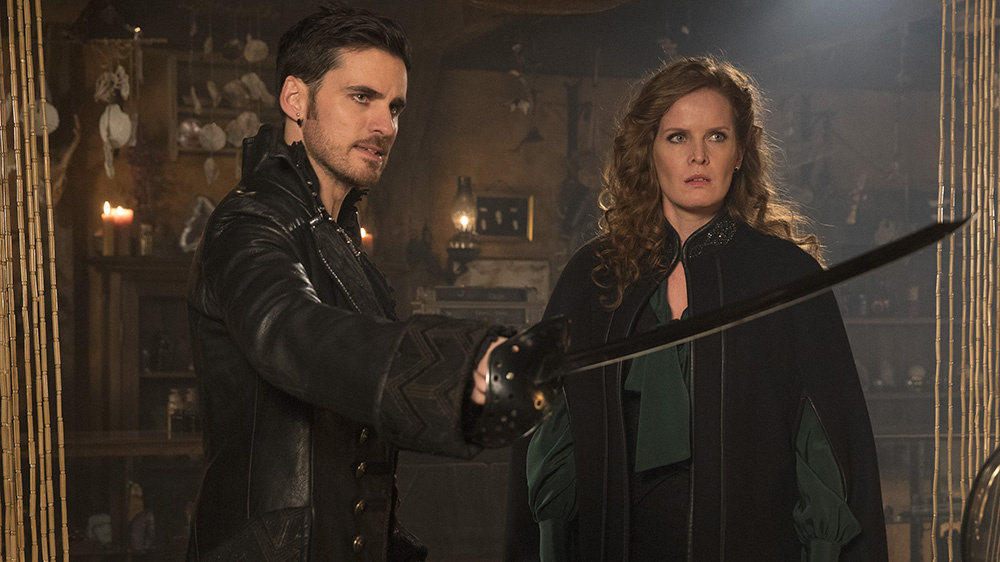 ‘Once Upon A Time’ is a fantasy drama series, but still finds its place on this list because this one, too, tells the story of a powerful woman who brings the people of her hometown under her wing and saves them from the wrath of an evil queen. Interestingly, all the characters in this series are based on some of the most popular characters in the history of fantasy fiction. The leading character, Emma Swan, is Snow White and Prince Charming’s daughter. Storybrooke, Maine is the fictional town in which the story of the series is set in. Edward Kitsis and Adam Horowitz, who have already established themselves in the world of film and television with the movie ‘Tron: Legacy’ (2010) and the series ‘Lost’ (2004-2010). ‘Once Upon A Time’ received critical acclaim for its ambitious story, but there were criticisms of Jennifer Morrison’s performance as Emma Swan. 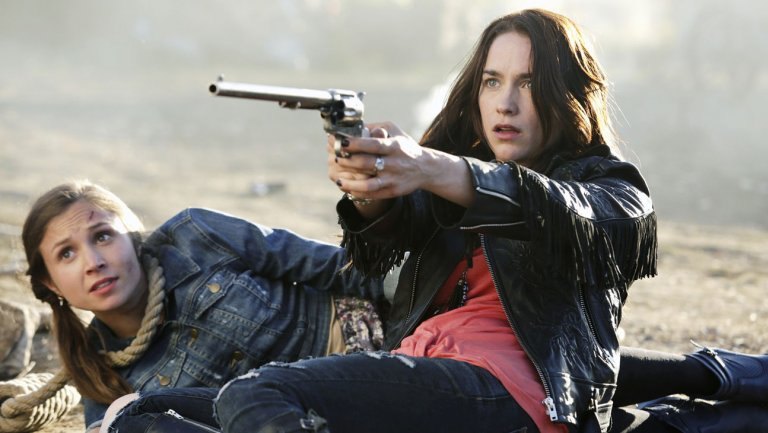 Wyatt Earp is a hugely important figure when it comes to the American Old West’s most famous lawmen. It is his great-granddaughter who is the leading character of ‘Wynonna Earp’. Despite being a fantasy series, ‘Wynonna Earp’ finds its place in this list because this one too centers around a strong female character who is not afraid to pick up the gun to save her own people. The eponymous character fights all the ghosts of the numerous criminals her ancestor had killed. There are a number of supernatural creatures present at the Ghost River Triangle, an area near Wynonna residence. She sends these creatures back to hell using the Peacemaker handgun, which was famously used by Wyatt Earp in several adventures he took part in. Melanie Scrofano plays Wynonna Earp in the series. ‘Wynonna Earp’ received critical acclaim throughout its run. The show also received praise for smoothly blending the Old West gunslinger genre with zombies. 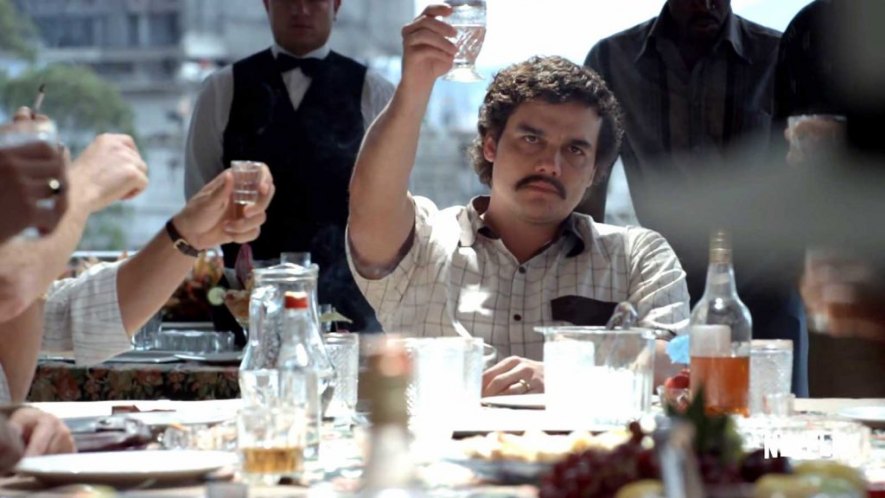 ‘Queen Of The South’ is a series about drug trafficking. If the series inspires you to check out more shows that explore drug dealing, ‘Narcos‘ is among the finest you can have a look at. The central character of the first two seasons is Pablo Escobar, a Colombian drug kingpin who became one of the richest men in the world with his international cocaine business. His syndicate was famously known as the Medellin cartel. After numerous efforts from the Drug Enforcement Administration and the Mexican administration, Escobar is finally killed. Wagner Moura plays the character of Escobar in the show. His performance is one of the finest ever in television in recent years. Season 3 of the series centers around another group called the Cali Cartel. The cartel is run by four brothers who call themselves the gentlemen of Cali. Pedro Pascal plays the character of Javier Pena in the series. Pena plays a pivotal role in bringing down both Medellin and Cali cartels. 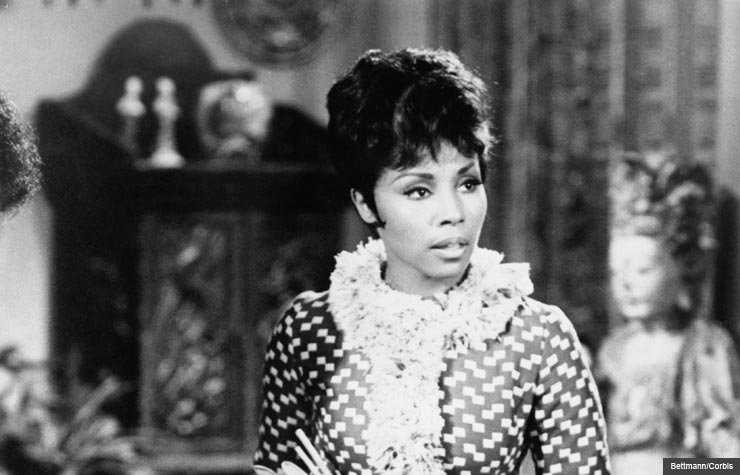 Unlike ‘Queen Of The South’, ‘Julia’ is a sitcom. But it is imperative to include this series on this list because of its important historical context. ‘Julia’ is one of the first shows on television which went against the usual stereotypes associated with African-American women as the leading character in this series is a black woman. Just like how Teresa challenges all the stereotypes, Julia here is a character who goes against the society, defying norms, rules and expectations. Diahann Carroll plays the leading character in this series. She is a widow and a single mother, who lost her husband in the Vietnam War. The show focuses on how Julia manages her career as a nurse, takes care of her little child, and also finds time to pursue some romantic interests. Diahann Carroll won two Golden Globe Awards for her performance in the show. 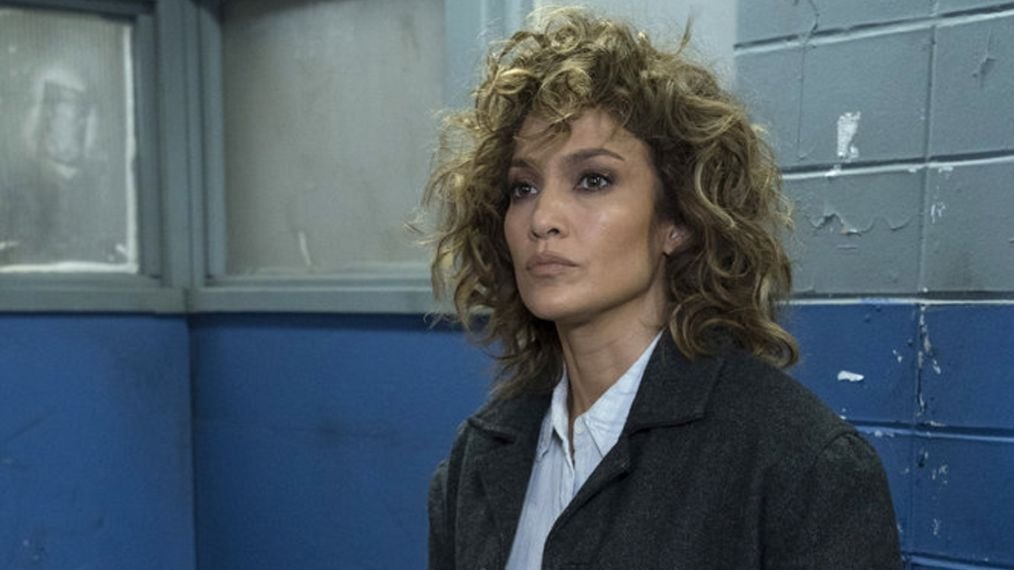 Adil Hasak is the creator of this NBC crime drama series. Singer Jennifer Lopez plays the leading character Detective Harlee Santos in the show. Harlee works for the New York Police Department. She is a single mother, whose abusive husband has been in prison for a long time. When her husband is released from prison, Harlee frames him for a murder case and sends him back to prison. Harlee’s commander is Lieutenant Matt Wozniak, played by Ray Liotta of ‘Goodfellas‘ (1990) fame. Matt is under the scanner of an anti-corruption investigation. What he does not know is that Harlee herself was suddenly arrested by the FBI for a corruption case, and she in turn becomes the FBI’s informer against Matt. Lopez received loud acclaims for her performance in the series and even won the People’s Choice Award for Best Crime Drama Actress.