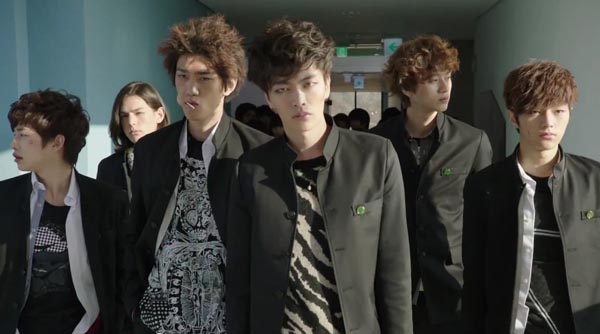 ‘Shut Up: Flower Boy Band’ is a South Korean television series written by Seo Yoon-Hee and directed by Lee Kwon. It is the second installment following ‘Flower Boy Ramen Shop‘ (2011) which is the first in the TVN’s “Oh! Boy” series of ‘Flower Boy‘.

‘Flower Boy Band’ is a coming-of-age story of a group of friends in a high school rock band as they experience friendship, animosity and pursue their budding passion for music.

Due to its likable content, ‘Shut Up: Flower Boy Band’ Season 1 went down well with fans, who are now wondering about whether there will be a Season 2. We delve into that after offering a quick glimpse at the show’s details.

Shut Up: Flower Boy Band Cast: Who is in it?

Sung Joon stars as Kwon Ji-Hyuk, lead vocalist and guitarist of the rock group, Eye Candy. Sung is known for his roles in other television dramas like ‘Can We Get Married?’ (2012), ‘High Society’ (2015) and ‘Madame Antoine: The Love Therapist’ (2016).

Kim Myung-Soo, professionally known as L, plays Lee Hyun-Soo, the guitarist of Eye Candy. L is a professional musician and a part of the South Korean boy group, Infinite and it’s subgroup Infinite F. Besides music, L is known for his work in television dramas like ‘The Time We Were Not in Love’ (2015) and ‘My Catman’ (2016).

Lee Hyun-Jae plays Jang Do-Il, the drummer of Eye Candy. Lee is a professional drummer and has acted in other television dramas like ‘Queen of the Office’ (2013), and ‘Please Find Her’ (2017).

Yoo Min-Kyu plays Kim Ha-Jin, the bassist of Eye Candy. Yoo was cast in the series after he won the audition competition, ‘Flower Boy Casting: Oh Boy!’ in 2011 for the show.

Kim Min-Suk plays Seo Kyung-Jong, the keyboardist of Eye Candy. Kim is known for his roles in ‘The Doctors‘ (2016) and ‘Innocent Defendants’ (2017).

Shut Up: Flower Boy Band Plot: What is it about?

Eye Candy is a rock band formed by a group of notorious friends from Dong Nae High School. It is led by the charismatic frontman, Byung-Hee. Byung is wild in his ways, extremely moody and a hardcore performer. On stage, all eyes are on Byung as he leads the show with his antics and energy.

The lead guitarist, Kwon Ji-Hyuk, is Byung’s best friend and adds a calming effect complimenting Byung’s chaos in Eye Candy. Lee Hyun-Soo plays the guitar for Eye Candy and is known for his quick temper. Jang Do-Il, the drummer, is the son of a powerful mob leader. However, unlike his father, Do-Il is quiet and kind. Kim Ha-Jin, the bassist, is a notorious playboy who believes being in the band will help him get a lot of girls. Seo Kyung-Jong, the keyboardist, is a fun-loving, kind-hearted guy who believes being in the band will eventually earn him a lot of money.

The members of Eye Candy are a bunch of troublemakers and not interested in studies. The only thing that binds them together is music. It is soon revealed that their school is about to close down for redevelopment and the students are to be distributed across other schools.

Byung-Hee suggests they should just drop the idea of schooling altogether and instead focus on the band. The other members take his suggestion as a joke since the idea of not going to school at all is too wild for them. Byung then meets Im Soo-Ah, a student from Jungsang high, one of the most elite schools in the city. Soo-Ah is the daughter of a once-wealthy businessman who is now bankrupt. Byung believes her to be his muse and feels a strong connection to her.

After receiving a letter of apology from Strawberry Fields for destroying their drum kit, Byung goes over to collect the new drum kit from Strawberry Fields in good faith. However, it’s a trap and Byung is severely beaten up with a metal rod. He later meets with an accident due to his injuries and dies. The members of Eye candy are deeply affected by the loss of their charismatic leader. While trying to come to terms with this, Kwon Ji-Hyuk decides to lead the band forward towards achieving Byung’s dream of winning the festival.

‘Shut Up: Flower Boy Band’ is a wonderful story of friendship and loss as a group of young friends find the true meaning of life.

Shut Up: Flower Boy Band Season 2 Release Date: When will it premiere?

There is no official news of another season coming up. If another installment is on the cards, we might hear about it sometime in 2020. In the event that ‘Shut Up: Flower Boy Band’ Season 2 is made, it is likely to get a release date in 2022. However, we will keep you apprised of official developments, here.

Check out the trailer of ‘Shut Up: Flower Boy Band’ so that you get a better idea of the show.